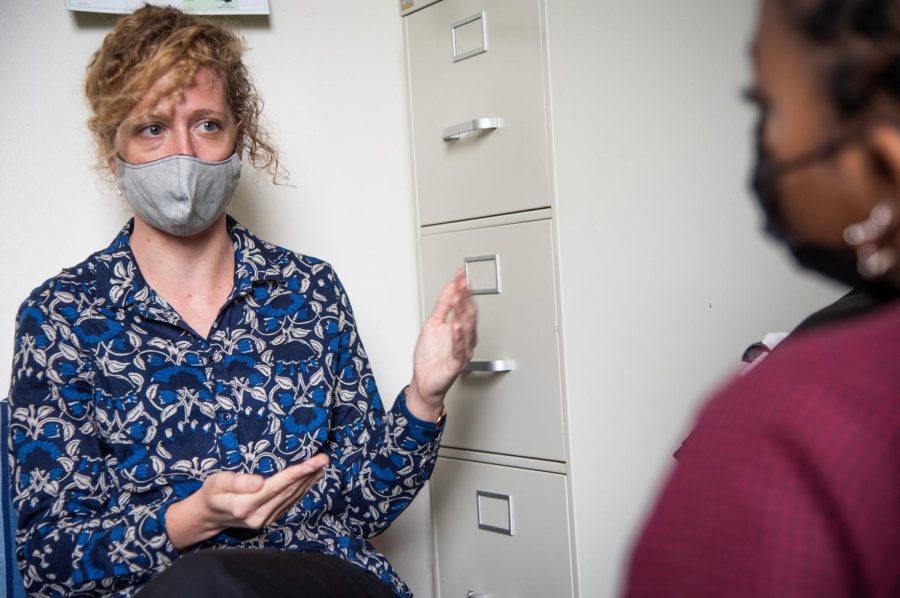 Amanda Vredenburgh, visiting assistant professor of French, speaks with a student. Vrendenburgh's position, as with all faculty members in the Languages and Cultures department, is not permanent. Photo credit: Michael Bauer

Amanda Vredenburgh, visiting assistant professor of French, won’t be returning for a second year at Loyola after not being offered a more permanent position in the Department of Languages and Cultures. She is leaving a program that, come fall, will not have any permanent faculty, tenured faculty, or a program head.

Loyola’s French program will not have any tenured faculty next semester, and the Department of Languages and Cultures’ students and faculty alike are grappling with the reality of what a tenure-free French program looks like.

Vredenburgh helped to advance the French program in her first year at Loyola by creating the Loyola Society for Francophone Cultures, hosting Loyola’s first French Film Festival and teaching four classes each semester. Although Associate Director of Public Affairs, Patricia Murret, said extraordinary professors are contracted positions primarily meant to teach, Vredenburgh said her contributions to the French program and her additional time with students are more than the duties that were outlined in her contract as an extraordinary professor.

When she was offered a position at a different university, Vredenburgh said she approached Loyola about the possibility of a more permanent teaching role.

“The answer was a very clear ‘no’ and it was a very disheartening response for the future,” she said.

Kim Díaz, international studies junior, and Sierra O’Brien, Latin American Studies freshman, said they are frustrated by the university’s decision to not invest in the French program by offering Vredenburgh and Thomas Martin, the only other French professor, long-term positions with the opportunity for tenure. Tenure-track professors are reviewed at the end of a six-year probationary period to assess whether they should be awarded tenure, according to Murret.

Instead, both Martin and Vredenburgh are extraordinary professors, meaning they are full-time faculty that don’t have the possibility of tenure down the line.

Díaz and O’Brien are among those spearheading a movement to bring awareness to the limited professorships in the Department of Languages and Cultures.

Both students noted the importance of long-term professors in creating relationships with and opportunities for students as well as furthering the development of the department.

“It’s impacting us as students. It makes it feel like we aren’t valuable,” Díaz said. “It makes all of us feel like our program is worthless.”

Eileen Doll, provost distinguished professor of Spanish, who has tenure, said a big issue with the lack of tenured professors in the Department of Languages and Cultures is a lack of continuity for students.

“To run a program that has majors and minors you really need to have someone who is going to stay there, has that job security and can dedicate time to that program,” she said.

O’Brien is one student who said she is feeling the effects of a lack of continuity among her professors.

“It’s kinda scary,” O’Brien said. “The connections that I made are disappearing and I’m gonna have to start over.”

Over the course of the year, she said she became close with Vredenburgh and Martin and that she’s been feeling hopeless since learning that neither will be returning to Loyola in the fall.

“It’s a horrible feeling when you can’t save who’s inspiring you,” she said.

With Martin and Vredenburgh leaving at the end of the semester, O’Brien said she opted not to add a French minor because she doesn’t have faith in the department allowing her to pursue that.

Díaz, who has a dual minor in French and Spanish, created a poster with a list of several “issues that need to be addressed” about the department, such as high professor turnover rates and the fact that many students in the Department of Language and Cultures have to go abroad or to Tulane to take the higher level language courses required for their majors.

Díaz sent an email to Uriel Quesada, the associate dean of the College of Arts and Sciences, on behalf of several students in the department about her concern for the professors in the Department of Languages and Cultures.

In her email, she outlined all that Vredenburgh had done for the French program in her year at Loyola, stating that “it truly saddens me that she is still not valued by our administration.”

In an effort to hear student concerns, Quesada held a Zoom meeting with these students “to answer questions and discuss their concerns,” according to Murret.

Quesada, in an email sent to Díaz after the Zoom meeting, stated that he spoke with Dean Maria Calzada about possible solutions to student problems and that they “want to meet with the department to get feedback directly from them.”

According to Vredenburgh, Loyola cited a lack of majors in the French program, financial problems due to COVID, and a suspected drop in enrollment in 2025 due to a drop in birth rates caused by the 2008 recession as reasons for not offering her a more permanent position.

According to Murret, the university cited that changing demand for certain programs changes the amount of professors needed in each. From 2013 to 2017, there was a drop in enrollment alongside the retirement of tenured Languages and Cultures professors.

“We must be balanced in our approach so that departments with higher enrollments are not adversely affected as we try to support others with declining enrollments,” Murret said.

Doll said the number of majors and minors within the Department of Languages and Cultures has increased in number recently. Nathan Henne, chair of the Department of Languages and Cultures and director of Latin American Studies, said the department serves about 100 majors and minors at present, which doesn’t include non-majors taking language courses. Both professors noted that this number isn’t huge, but it is significant.

“How are we to increase the number of students if we can’t offer courses to attract the students?” Doll said.

Although Martin and Vredenburgh are leaving after this semester, Murret said that the provost just approved a full-time position of Visiting Assistant Professor of Francophone Studies. This position does not have the opportunity for tenure.

According to Henne, Loyola has a recent history of not offering tenure-track positions to qualified professors in the Department of Languages and Cultures.

Doll said the university is simply not replacing most retired tenure professors with positions that lead to tenure. Doll, who is retiring at the end of this semester after more than 30 years at Loyola, will be replaced by a multi-year Spanish/Latinx Studies position, according to Murret. The replacement, just as the newly announced French position, will not be on the tenure track, according to Henne.

“We did our normal proposal process to replace (retired tenure positions) like we do and we were told ‘no.’ The line was going to remain vacant,” Henne said.

Instead, the department has taken on adjunct and extraordinary faculty whose contracts are often shorter and only require professors to teach. Starting in the fall 2021 semester, there will be three active tenured professors in the Department of Languages and Cultures, according to Henne. This has led to extraordinary professors, like Vredenburgh, taking on responsibilities outside of their contract obligations, and tenured professors like Henne juggling many things at once.

“I’m doing nine capstones, four of which are honors theses, myself this semester. I can’t do as good a job as I would like. I can’t give the students the dialogue and time,” Henne said.

He also said that ideally he shouldn’t be both the department chair and director of Latin American Studies but that there isn’t anyone else to do the job.

Henne said the department doesn’t need 12 tenured professors again and that it is willing to work within more efficient models to create a balance of faculty composition in the department. He said there just needs to be some more give and take from administration in hiring more tenure-line professors.

“It’s unsustainable as is,” he said. “In order for the program to thrive, we do need something.”

Latin American Studies and theatre arts senior Abby Trahant said she can already see the lack of permanent professors in the Department of Languages and Cultures affecting younger students. She said, even though she’s proud to go to Loyola, incoming students may not be able to say the same if these problems continue.

“They’re going to have to fight to legitimize their major,” she said.

In her time at Loyola, Trahant has had many hands-on learning experiences, such as interning at a museum on Tulane’s campus, producing a Mayan dance drama as her senior capstone, and she’s even planning to do an internship in Mexico. She credits many of these opportunities to her professors.

“If we lose these professors who go to bat for us constantly, we’re going to lose so much,” she said.

The opportunities provided to her and other students by professors are valuable, Trahant said, but they may begin to disappear without more long-term faculty.

“If we don’t keep building the department, we’ve lost a lot. We lose that Jesuit value about global concern,” she said. “It’s very scary and very disappointing.”