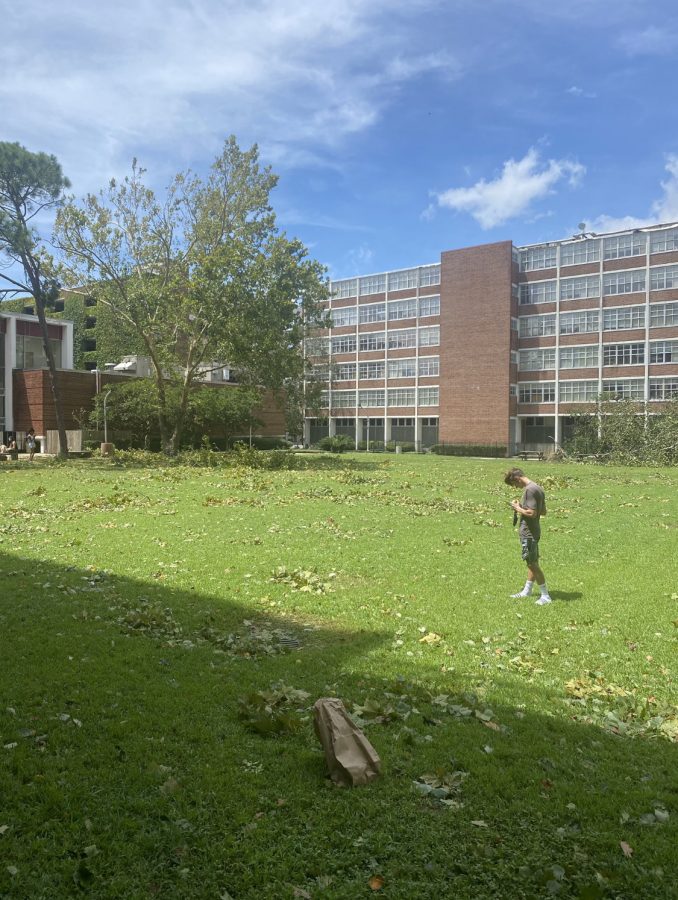 A student stands in the residential quad among fallen branches the morning after Hurricane Ida tore through campus. Students, faculty, and staff are making their returns to campus after the storm in the coming weeks.

Loyola has announced “alternative” academic and housing plans as the university awaits word on power restoration one day after Hurricane Ida tore through Southeastern Louisiana.

The university will have to either extend the fall semester, reconfigure the academic calendar, or move classes online depending on how long it takes to restore power to campus, Loyola President Tania Tetlow said in an email to students and faculty.

“The two things I hate most in the world are uncertainty and being away from New Orleans. But this will be brief, and we will get through it,” Tetlow said. “I worry about all of you, but I am also so proud of how strong you have become.”

Hurricane Ida, which hit New Orleans as a Category 4 storm, left the city without electricity, toppled buildings, and uprooted Loyola’s plans for the fall semester.

If on-campus classes are able to return within the next two weeks, Tetlow said that Loyola can pause schooling and allow students to make up missed classes through readjusting the academic calendar. If the interruption is longer, Loyola plans to either push the fall semester into the January term or transition classes to online for one to two weeks, according to Tetlow.

Tetlow anticipates that it may be difficult for the university to get everyone access to the internet for online learning.

Loyola residential life will also work with students who sheltered on-campus to make off campus arrangements. 347 students stayed on campus during the storm and between 300 and 250 students remain on campus as of Monday, August 30, according to public affairs director Patricia Murret.

The university will rent buses tomorrow and Wednesday to transport students to airports in Biloxi, Gulfport, and Mobile, according to Tetlow. Tetlow also advised students to check flight availability but not make flight arrangements yet.

At least one hundred students, particularly international students, who do not have temporary off-campus arrangements will be able to receive housing at Spring Hill College in Mobile, Alabama, Tetlow said.

Members of the Loyola community who evacuated are asked not to return to campus and remain in places with power. Tetlow urged students who are able to to consider housing friends who are without utilities.

Tetlow said the university should have more information tomorrow after receiving responses from city and utility company officials.

“We are hurriedly exploring possibilities for housing for those who truly have no other options, but it won’t be within our power to solve that problem for all of the 5,000 people in our community,” Tetlow said.

Brendan Heffernan contributed to the reporting of this story.