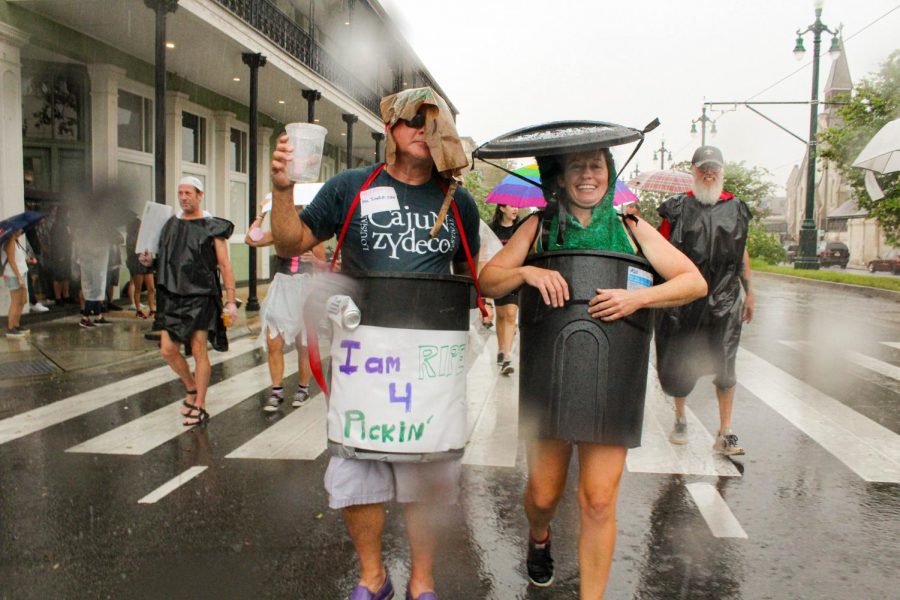 Parade goers walk down St. Claude for the trash parade on Sept. 18 in support of higher wages for sanitation workers. Sanitation services in New Orleans came to a halt for 10 days after Hurricane Ida causing a pile up.

Orleans Parish residents are calling for action as they see and smell the effects of no garbage pickup for three weeks after Hurricane Ida.

The storm disrupted the already inconsistent trash pickup in New Orleans and exacerbated the city’s sanitation staffing issues, officials said. Some residents said they haven’t had their trash picked up for weeks before Ida and the 10 day halt of sanitation services after the hurricane added  more.

Sophia Parker, business management sophomore, said her trash was picked up for the first time in three weeks Sept.16.

“The trash pile is absurd; it is literally making the city smell like a dirty zoo, Parker said. “Not to mention it is causing maggots in my trash can.”

Emily Patrick, theatre senior, said there is trash everywhere she looks and that the situation is incredibly frustrating.

“I think the city should see that they’re the problem, not the trash workers,” Patrick said. “The trash workers were on strike for a reason a week before the storm. Now, the city is asking way more of the limited trash workers they do have,” she said.

In response to the issue, Mayor LaToya Cantrell enacted Operation Mardi Gras Sept. 17, which allowed crews to operate as they would during parade season.

The operation is broken into three service areas with Service Area 1 covering Mid-City, Uptown, and the West Bank. Service Area 2 is the largest, covering Lakeview to New Orleans East, as well as the Bywater. Service Area 3 includes the French Quarter and the Central Business District.

Ramelli LLC, a waste contractor, has been signed on to help Service Area 1.

The City announced Sept. 23 that it will award four emergency contracts to solve this problem with the current estimated cost in the range of $20 million. According to NOLAREADY, the contracts will be awarded to Ceres Environmental Services, LLC; River Birch, LLC; Waste Management, Inc. and Witt O’Brien’s, LLC. The statement also said the City is trying to get FEMA funding to subsidize the cost.

The city opened the Elysian Fields Transfer Station for residents to dump their own trash, free of charge. The station is open seven days a week between 8 a.m. and 3 p.m.

“As much as I’m upset about the trash not getting picked up, that’s a drop in the bucket compared to people’s livelihood,” Egan said.

As of July 2020, hoppers, sanitation workers that physically grab and dump waste, working for Metro Service Group, were paid $10.25 per hour, only $3 above the state’s minimum wage, according ANTIGRAVITY.

Elizabeth Seleen, another parade attendee, said she sympathizes with the city but still wants leadership to act on the problem.

“It’s such a complicated issue,” Seleen said. “We understand that the city is struggling with stuff, but at the same time, it’s like this has got to get to be a better situation,” adding “You can do that by paying the hoppers and meeting their demands.”