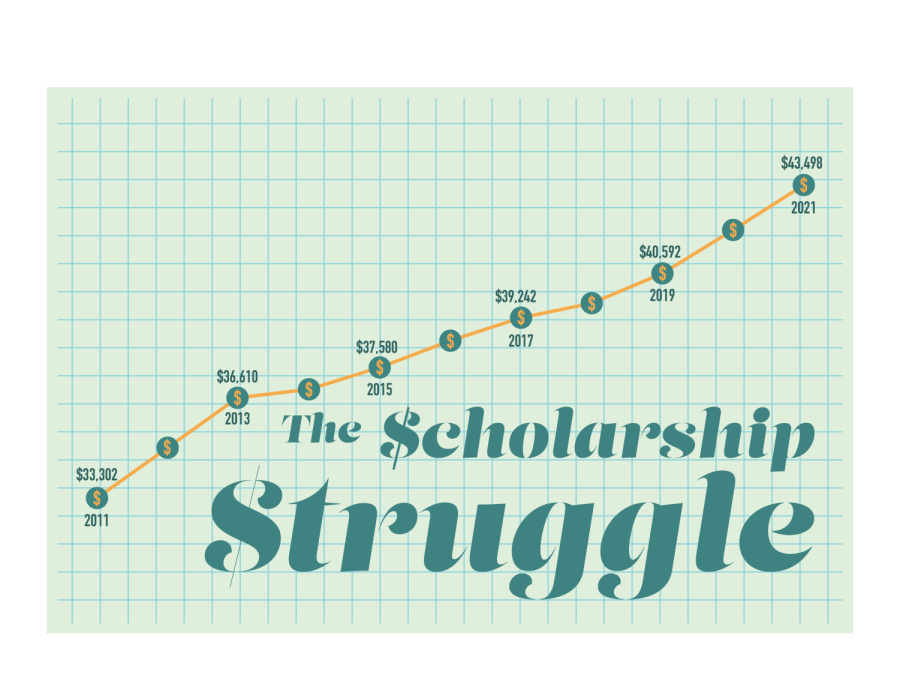 When English junior Jake Krug checked his student account this past summer, he was shocked to see that he owed more money than he had expected. Krug, who is also a staff writer at The Maroon, said that he called the Office of Student Financial Services immediately to find out where the extra charge had come from. He said that financial aid representatives only told him to check his student account to find the balance owed and would not explain where it had come from.
It was only after he had his mother get involved, he said, that he got an explanation: the extra balance came from the annual tuition increase. Krug said that the Office of Student Financial Services did not offer any help when it came to figuring out how to pay for the additional cost.
According to the university fact book, from the 2019-20 school year to the 2020-21 school year, the total annual cost of undergraduate tuition and fees at Loyola increased from $42,030 to $43,498, an increase of 3.5%. Over the past 10 years, the total cost of tuition and fees has increased by an average of 3.1% per year.
“It was a bigger increase than I had expected or even been prepared for,” Krug said.
According to U.S. News & World Report, the national average for private university tuition for the 2021-22 school year is $43,775. That’s up from $42,695 in the 2019-20 school year, an increase of 2.5%. The 10-year average increase in tuition for private universities nationwide was 4.3% per year.
But Krug said that his struggles with financial aid did not stop there. He said that financial aid representatives have repeatedly seemed unwilling to help, and he and his family had to resort to taking on additional work hours to pay the rest of his tuition balance.
Krug also said he was frustrated to learn that scholarships do not increase for returning students, even as those same scholarships do increase for new students.
“I really love Loyola,” he said. “I love my professors, and I love my peers, and I love the campus and everything, but at some point I wonder if it’s worth going through all this just to be here.”
Chief Enrollment Officer Nathan Ament said in an email that Loyola increases tuition every year to keep up with increases in its operating costs.
“We also make clear to students when they enroll at Loyola that they should expect modest tuition increases to reflect our increased costs,” he said.
Ament said that it is Loyola financial aid policy to award scholarships for a student’s entire tenure at Loyola at the time they are admitted. He declined to elaborate on why later increases in scholarships are not applied to returning students.
“That seems really unfair to me,” said sociology senior Bergin Downs.
Downs said that while she expected rising tuition and difficulty dealing with financial aid before she started college, she was surprised at the size of tuition increases and the extent of her frustration with what she described as poor communication from the Loyola administration regarding financial aid.
“I feel like an email is the least they could do to let us know about the tuition increase every year,” she said.
When asked how Loyola communicates information about tuition increases to students, Ament said that the website is updated as soon as tuition increases are approved by the board of trustees.
Brendan Rooks, government affairs coordinator at the Student Debt Crisis Center, said lack of clarity about financial aid on the part of universities frequently contributes to students ending up in debt.
“College financial aid is confusing stuff that changes quickly,” he said. “Especially if you’re only 17 or 18 years old, it can be almost impossible to understand.”
He said that he thinks universities have a responsibility to be clear and honest about financial aid.
“It’s a really common practice for universities to be really proactive and helpful about financial aid to entice students to come there, and then once they’re there, they stop helping you because you’re already committed,” Rooks said. “It’s a really deceptive trick.”
Ament said that Loyola does adjust need-based financial aid from year to year and that students who are struggling should reach out to the Office of Student Financial Services.
Some students, however, feel that this is not enough.
“I don’t feel like Loyola has lived up to the image they project to students as a supportive, helpful, caring, Jesuit university,” Downs said.