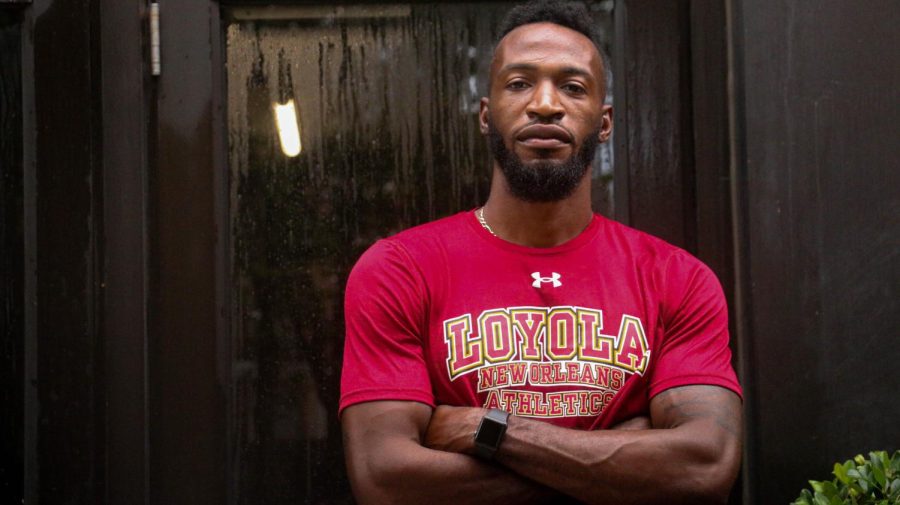 Assistant Coach Damar Forbes near the University Sports Complex Sept. 28, 2021. In the spring, Forbes will enter his first season with Loyola's track and field program.

Loyola’s track and field program welcomed Damar Forbes as the team’s new assistant coach earlier this year. In the spring, Forbes will begin his collegiate coaching career at Loyola and will primarily coach sprints, hurdles, and jump events.
Forbes, a former Olympian and NCAA champion, is a native of Jamaica. He moved around the United States before starting his career with Louisiana State University’s track and field team.
As an athlete at LSU, Forbes became one of the most decorated long jumpers in the program’s history.
He then went on to represent Jamaica in the long jump in two World Championships in 2011 and 2013, and the Olympic Games in 2012 and 2016.
“I’ve pretty much done everything in track and field when it comes to competition,” Forbes said.
Forbes was inspired by the wide variety of coaching that he’s seen in his time with the sport, and he plans to carry these traits into his career at Loyola.
“The coaches I’ve been around kind of molded the way I view coaching. They’re very professional and no-nonsense, and I admire the way that they did everything and just the people that they are,” Forbes said.
Forbes said he wants to help Loyola’s track and field program gain recognition. He believes that adding himself to the mix will help elevate them as contenders.
“My overall goal is to get the team better. I just want them to love the sport the way I love it,” he said.
Although he said he has a special connection with long jump, Forbes said he likes to coach sprints the most because it gives him a rush.
“It happens in every event, but for some reason with sprints, it just gives me a different kind of joy,” Forbes said.
Geoffrey Masanet, track and field head coach, is excited about Forbes’ hiring and the fresh perspective that he brings to the program.
“From when I first talked to him, I realized quickly that he’s very personable and he’s someone I would be happy and fortunate to work with. Our goal is to continue getting better on an individual and team basis. With his background, he’s going to motivate kids, and coach them up really well,” Masanet said.