“The Suicide Squad” review: More than its previous namesake 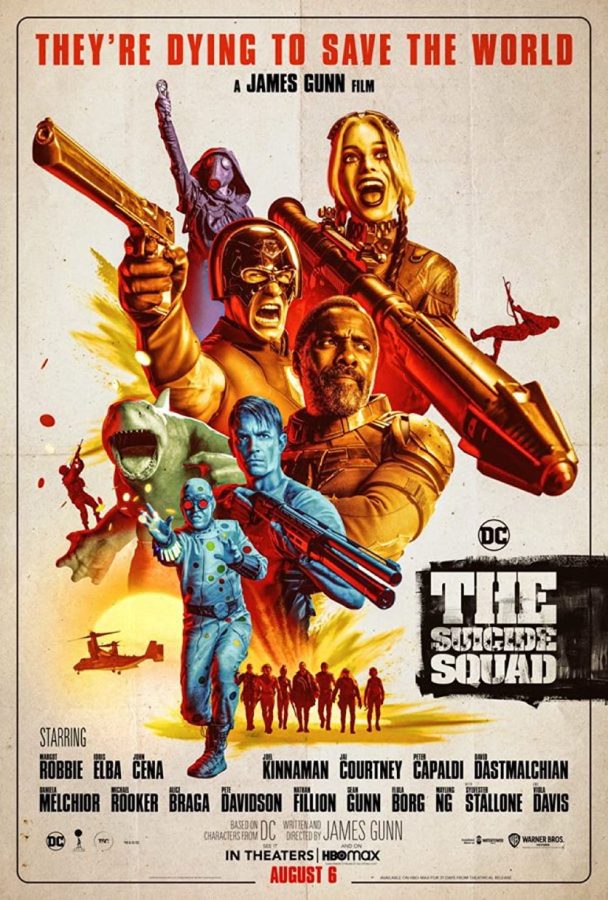 James Gunn’s “The Suicide Squad” sidesteps anti-hero archetypes by grounding each character with insecurities and creates a team of psychopaths with mommy and daddy issues. I know, it’s fantastic.

A group of DC Comics villains shave some time off their prison sentences by fighting their way to the island nation of Corto Maltese. They are tasked by their superior Amanda Waller (Viola Davis) with removing any trace of the top-secret Project Starfish to prevent the island’s anti-American government from taking advantage of it. This is a slight sequel/not-so reboot/stand-alone film: the marketing is unclear, but no one is going to blame you if you would prefer not to torture yourself with 2016’s “Suicide Squad,” especially since this one only acknowledges it for casting purposes.

Harley Quinn makes her third appearance in “The Suicide Squad,” and this incarnation is by far my favorite. Margot Robbie has taken her character through an entire arc since last year’s “Harley Quinn: Birds of Prey” where she violently finds herself after getting dumped by Joker. “The Suicide Squad” sees her more independently psycho than ever, wearing her independence quite literally on her back, and this newfound individuality makes for some of the best action sequences in the movie.

Idris Elba steps up to replace Will Smith as Bloodsport, the leader of Task Force X. Replacing the Fresh Prince is a difficult feat, even more so due to Bloodsport being a less talented version of Deadshot. Even so, his daddy issues and insecurities as a father are bound to win you over emotionally if his marksmanship fails to. Daniela Melchior was surprisingly impressive as Ratcatcher 2. Her chemistry with Idris Elba was something this film could not do without.

The rest of the cast was solid in upholding director Gunn’s comedic timing. No one felt out of place or poorly cast, except for John Cena. I liked John Cena but I don’t know if John Cena will ever not be John Cena. David Dastmalchian also brought a valuable nuance as the glum, tormented Polka-Dot Man, a character who wears his insides on the outside in many ways. The entire team can empathize with him because of the chaos that stirs within him.

Before viewing it, I was afraid that Gunn would take “The Suicide Squad” and slap a “Guardians of the Galaxy” format on it. But not even ten minutes in, “The Suicide Squad” is James Gunn without limitation; he did not have to adhere to a ten-year-long storyline. He takes the R rating in full stride, delivering the best action we’ve seen from the DC extended universe since … well, last year’s Harley Quinn movie.

Well-choreographed action is something that has been missing from this franchise ever since it began. The feeling of watching Harley Quinn bashing a face in for ten seconds cannot be matched by two CGI bodybuilders seeing how far they can throw each other; there’s just no grit in that. It’s not even about blood flying everywhere as King Shark bites the head off of a few soldiers; it’s the visuals that are added to the fight scenes that directly reveal what’s going on in our anti-hero’s heads, that’s CGI used the right way.

The storyline is nothing special, pretty simple, but we never need anything too complicated for these characters. All I ever wanted from this series was a sound vehicle to watch them fight and bicker their way through. The common theme of“The Suicide Squad” is more present than the previous installment, the idea that people who have done bad things can do some good. These are murderers; not people with ten-year-old offensive tweets, but MURDERERS. We’re constantly reminded of who they are, but the film doesn’t shy away from showing their background of being abused by their parents, their current circumstance of fleeing away from parental responsibility because of it, and struggles with attachment from losing everyone they’ve ever loved.

These characters may have done bad things, and some are inherently evil, but this film never dehumanizes them. This allows the characters to do some good. No other director could have made this film and the right director wouldn’t have been able to if we dehumanized. It shows how much Gunn has grown as a director and a person since the country had to petition to get him back.

I can honestly say “The Suicide Squad” is in near-peak form, and my only critique lies within the wider scope of the franchise. The DCEU continues to nudge closer to that self-aware/self-deprecating quality Deadpool has. Closer to the need for more comedic relief and fun action sequences that scream Marvel Cinematic Universe. Closer to the over-the-top action that is absolutely impossible for a person without superpowers to accomplish that we’ve come to appreciate from the Fast and Furious franchise. The more they pull from other franchises to make up for their own failures, the more disappointing it gets to see them let go of a mission to create dark comic book movies. Create films 100% self-involved where every character is completely invested. The serious tone of their films is fading away years after successfully making the perfect representation of that mission: Wonder Woman.

That said, I’d much rather get films like “The Suicide Squad” than the majority of what DC has put out. It’s not just a combination of franchises made right, it’s the emotional story of bad guys we don’t get too often, and it’s the best blockbuster to come out this year.

“The Suicide Squad” is now available on Blu-Ray, DVD and 4K UHD.