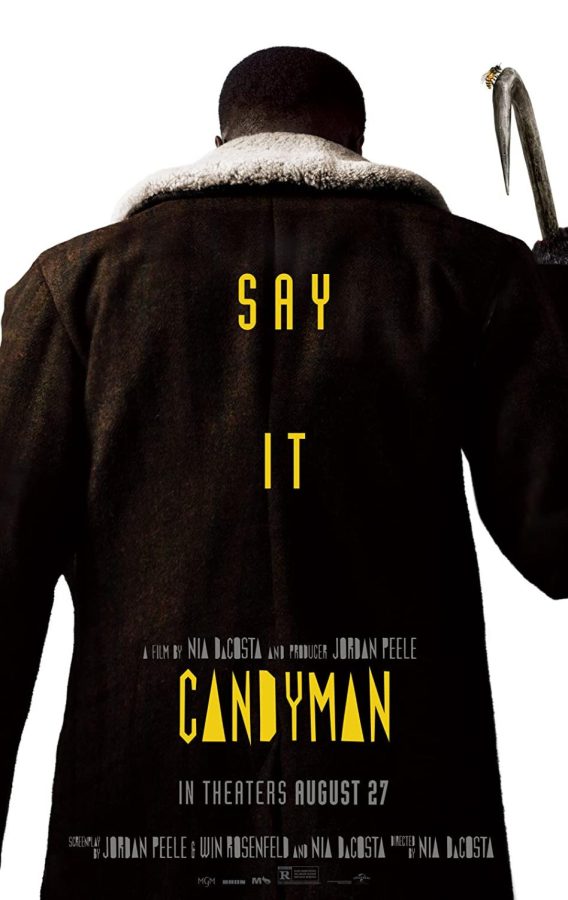 When Hurricane Ida flooded parts of Louisiana, my family and I evacuated to Atlanta. To distract ourselves, we went to the movies to see Nia DaCosta’s remake of “Candyman.” Let’s just say, I couldn’t sleep for at least two days afterwards. I was too busy imagining Yahya Abdul-Mateen II as main character Anthony McCoy, standing over me in the dark, wearing a bloody yellow trench coat. This sounds overdramatic, but I’m not kidding. In fact, I’m easily startled.

In the film, McCoy starts off as a popular artist in Chicago. After the success of his previous art exhibit, he struggles with finding new inspiration for his next piece. His superiors (who are white) keep labeling his new ideas as outdated and overdone, even though they depict Black oppression. McCoy starts wandering the streets of Chicago for inspiration and finds it in the city’s abandoned projects. However, he accidentally summons Candyman and later learns about his dark past, which causes him to lose his mind.

DaCosta’s “Candyman” is great even if the beginning was slow. Looking at the trailer, you would think you will be watching a movie with action and drama, but this is often not the case. “Candyman” takes a long time to introduce the characters and tell the backstory of the titular legend. If you are looking for a horrifying thriller that leaves you crying and throwing up, then this is not the movie for you.

Instead, “Candyman” is essentially a think-piece loaded with symbolism, which is as expected when Jordan Peele co-wrote the script and produced it. It touches on themes of gentrification and racism, and it becomes clear that the true monster is not Candyman, but rather the insensitivity and carelessness of white people. As I was watching the film, I realized that Candyman is not a singular being. Instead, he represents a system that takes Black men and makes them the scapegoat of all negative actions that happen in society. For instance, when the police search the projects for a particular crime suspect, the residents tell them that “Candyman did it.” It’s a saying that Black people have created to stop themselves from being terrorized by these white policemen for no reason.

Candyman can be both a savior and a curse for the Black community. As a fearsome legend, Candyman is physically scary. He has a hook for a hand, his skin is scarred and bloody, and his clothes are filthy. He looks like a zombie. What does this say to you? He symbolizes the notion that no matter your background and morality, you are always at risk of being seen as a threat. On the other hand, Candyman presents himself as a vigilante for the Black community. In one scene, he is summoned by a Black woman threatened by police officers, whom he kills.

The fact that Candyman killed only white people in the film felt like poetic justice for me. After all, they were the only people who dared summon Candyman because they doubted his existence. The film showed that they have no respect for Black culture or customs, as if Candyman was just another urban legend they did not take seriously. White people inadvertently created Candyman by aimlessly blaming Black men for criminal activity, and now their racism comes back to haunt them.

The ending of this movie was extremely sad and it left me feeling unfulfilled. Yes, white people were killed for their wrongdoings, but ultimately the cycle of Candyman was not broken. This emulates real life because the system of Candyman is happening in real time, minus the supernatural aspect. In fact, we truly live in a real life nightmare that we never seem to wake up from.

“Candyman” is now available on demand.