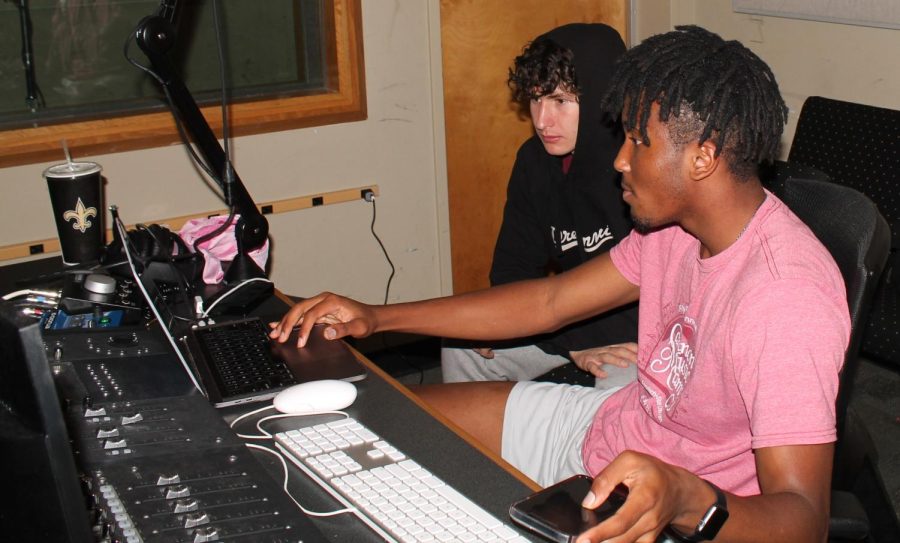 Freshmen Tavi Moddel and Aaron McFadden produce a track in a studio in the Communications and Music Complex on October 24, 2021. Both students frequently use the studio past midnight to collaborate and work on personal projects.

After a long day of classes, freshman Aaron McFadden meets with rappers, producers, and managers on the fourth floor of the Communications and Music Complex to set up for late night productions.

The fourth floor houses multiple industry-level recording studios and McFadden, a student in Loyola’s new Hip-Hop and R&B program, said he reserves one almost every night.

Loyola music industry students said they gravitate to the studios whenever they feel inspired for an authentic production experience, and since these workspaces stay open 24 hours a day, many of them can be seen collaborating into the early hours of the morning.

McFadden said working on the fourth floor is the reason why he hasn’t slept much since starting college in the fall, but he said he’s not complaining as it’s when he feels most creative.

“It’s more fun at night when I just get to work and don’t have to worry about a schedule and having to go to class,” McFadden said. “I can just keep making music until I get tired.”

McFadden said he often stays past midnight working on whatever comes to mind. He said he is never alone in the building as he is frequently joined by other students who also want to freely create.

“We can really get in here and not feel like we have anyone looking over our shoulder telling us what to make. And it makes the best music,” said Tavi Moddel, a freshman in the Hip-Hop and R&B program.

Moddel said he chose Loyola because of the unique opportunities the program offers.

“There’s a lot of other schools where you have to be a certain major or take a certain amount of classes to actually hop in the studio, but here, they set you on the right path and let you come in and get it done,” Moddel said.

All students in the School of Music Industry Studies are allowed to use the spaces after making a reservation with a student worker on the floor. They have to check into the rooms before 12 a.m. but can stay as long as they need. When making a reservation for the night, students can choose between six studios. Two are major with multiple isolated rooms, three are smaller with separate isolated booths, and one is a studio where students can produce from their laptops.

Sophomore Matthew “Dami” Eghdami said he often collaborates with other students whenever he’s in the studio.

“There’s a nice little community that hangs out on this floor,” Eghdami said. “It’s just people who always want to work on music or just be around it.”

Lovell “U-P” Cooper is the creator of the university’s Hip-Hop and R&B program as well as the facilities manager. When envisioning the program, he said he thought back to when he was just starting out in college.

“I wanted to create something that we always wanted,” Cooper said. “The students nowadays want the same thing.”

To learn, create, and collaborate, in a studio, Cooper said all students in the program have to do is sign up on time and respect the space.

“It doesn’t matter how great or talented you are, it’s like ‘bruh, just come with the right energy we’ll have you,’” he said.