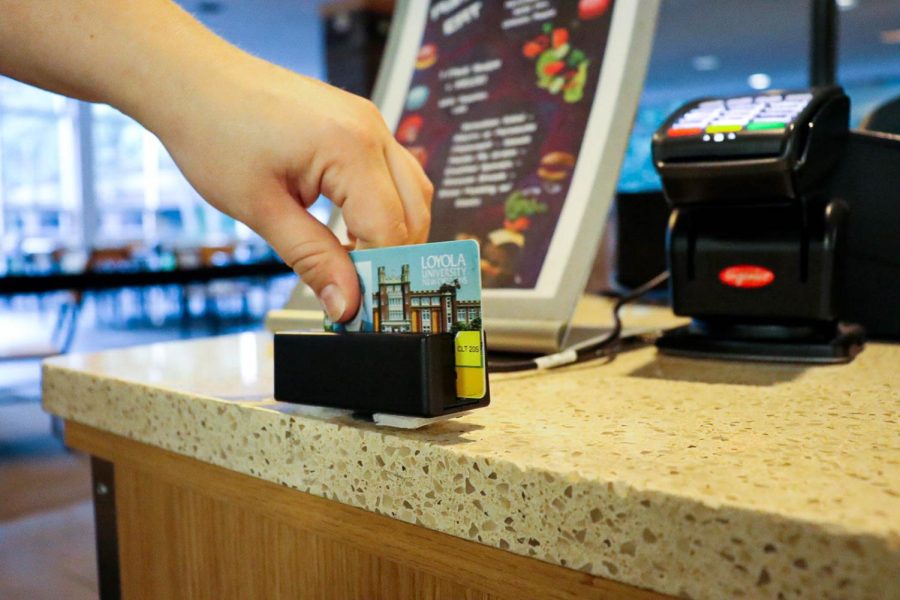 A student swipes their ID in the Orleans Room on Loyola's campus on Nov. 2, 2021. Photo Illustration

Loyola and Sodexo partnered this year to launch the Swipe Out Hunger program on campus, a meal swipe bank for students without meal plans and for those experiencing food insecurity.

During a year riddled with obstacles, college students are struggling with food insecurity at higher rates than before. Over half of undergraduate students use off-campus food banks, and 34% have experienced food insecurity in the last 30 days, according to a 2020 Forbes study.

Swipe Out Hunger, the leading nonprofit working to end student food insecurity, matched the amount of meal plans purchased at the university and provided around 1,300 meals for students this semester.

Jacob DeRusha, university minister for social justice and immersions, said food insecurity has been an issue since he was a student at Loyola in 2016. He said he wants students to have stable access to food so they can put their energy towards enriching the Loyola community through academia and extracurricular activities.

The program’s goal is to eliminate food insecurity on college campuses and reduce the stigma surrounding it, Kass said. She said that the program wants to empower students to ask for help and not be ashamed of needing support.

“Some students believe they do not need food as much as the next person, or they feel they should be ‘making it’ on their own,” Kass said.

“We care for the whole person,” DeRusha said. “This means intellectually and socially, but it also means nutritionally, making sure our community has the resources to have a good meal that sustains them.”

The program began as a grassroots movement in 2010 and was launched at 12 college campuses in 2019 before expanding to other campuses. Since its start, Swipe Out Hunger has provided 2.5 million meals to college students across the country, Sodexo said.

Before the program was formally launched, students were applying to the swipe bank, Casrill said.

To participate, students can fill out a form on Loyola’s website. After filling out the form, students will meet with Student Affairs, who assess their situation and help determine the number of meals the students need, Casrill said. The meals are loaded onto a card that students can pick up in the Orleans Room, and all communications are kept anonymous, according to Casrill. Next semester, the meal swipes will be loaded directly onto student ID cards to help maintain a level of anonymity, he said.

“In a lot of places, including here, it’s been asking for donations and trying to pull things together at the last minute,” Casrill said. “Having the meals on a card for them, where they can have breakfast, lunch, and dinner with their peers, they never have to worry about feeling left out or insecure.”

Casrill said that there’s no threat of meals running out through the program and that students shouldn’t feel afraid of applying.

“Not every student’s situation is the same, and they should be supported by their schools and other stakeholders like dining services that can help,” Kass said.