OPINION: I was silenced during the Black Lives Matter movement 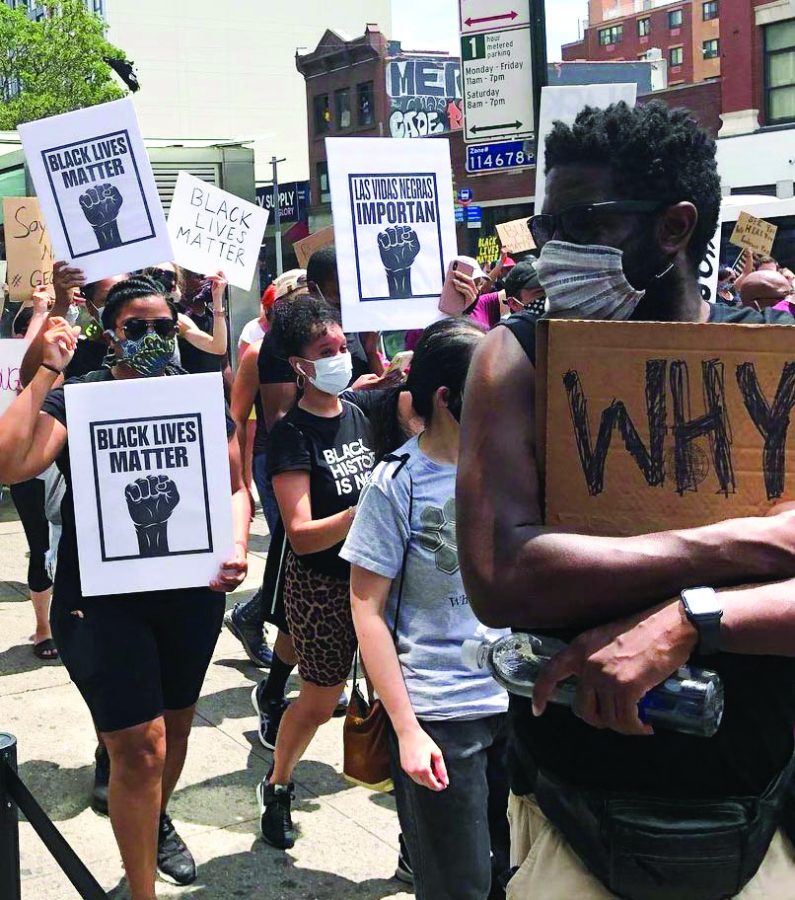 Protesters march in New York City in June 2020. Lawson says that the Black Lives Matter movement changed his perspective on his career. Courtesy of Ty Lawson.

Bearing witness to America’s racial reckoning during a pandemic and protest is an unimaginable experience that Black journalists like myself had to endure.
It was our professional responsibility to “grin and bear it,” reporting the facts no matter how gut wrenching they were. While you could avoid watching the nearly 9-minute dying plea of George Floyd, I did not have that option.
I have been a journalist since 2000 when I graduated from Loyola. Over the years, I have covered several tragic stories but never once had I ever been so haunted by an image like that of Floyd’s life being snuffed out under the knee of a police officer while the whole world watched – live.
It was inescapable. At the time, I was working from home for a network morning news show. My work day ended at 10 a.m. leaving me stuck in my apartment for what seemed like an eternity of free time. There were only so many shows I could binge watch, websites I could peruse, and songs to which I could listen. Eventually, as someone not skilled in the art of simply staying home, I started running through the deserted streets of New York City.
In the aftermath of Floyd’s death my pandemic routine was engulfed by Black Lives Matter protest. Initially, I would stop and watch protesters marching peacefully through the streets. This silent observation soon grew into feelings of guilt watching the hundreds of people who were galvanized to take to the streets demanding justice.
What sparked my desire to join in was not just the growing false narrative of what led to Floyd’s death, but the fact that as a Black man and journalist — who had always remained completely objective in my professional duties — I was suddenly silenced like so many other Black journalists across the nation during America’s cry for freedom.
When I voiced my concerns with the optics of the situation, I was told, “You’re too close to this story. Emotions may get the best of you.”
Upon returning to our studio in the weeks following Floyd’s death, my pandemic routine had grown to include daily walks alongside the Black Lives Matter protest. This newfound commitment came out of my frustration over the audacity of my skin color being weaponized against me as an automatic bias.
I was livid that no one ever even bothered to ask me how I was doing when all this was unfolding. Floyd’s death came on the heels of a number of other recent Black murders and racist confrontations. On February 23, 2020, Ahmaud Arbery, an unarmed 25-year- old Black man, was shot and killed while jogging in Glynn County, Georgia by three white vigilantes. Followed the next month by the murder of 26-year-old emergency medical technician Breonna Taylor who was shot and killed by officers who burst into her home with a no-knock warrant. The very morning of Floyd’s death, a white woman, Amy Cooper, breaking the rules in Central Park’s bird watching area, called the police on a Black man, falsely claiming he was threatening her. While each of these incidents took place in various cities across the nation, I couldn’t help but think it could have been me.
According to some in my industry, these headline grabbing encounters are stories Black journalists like me should never be privy to.
But like any good journalist would do in times of challenge and chaos, I gained immeasurable passion and purpose. My daily pandemic routine included playing “The Hamilton Mixtape.” John Legend’s electrifying contribution kept reminding me why I got into this business.
“I witnessed their deaths firsthand. I made every mistake and felt the shame rise in me. And even now I lie awake, knowing history has its eyes on me”.
This is why as a journalist who happens to be Black, I could not and will not be silent.