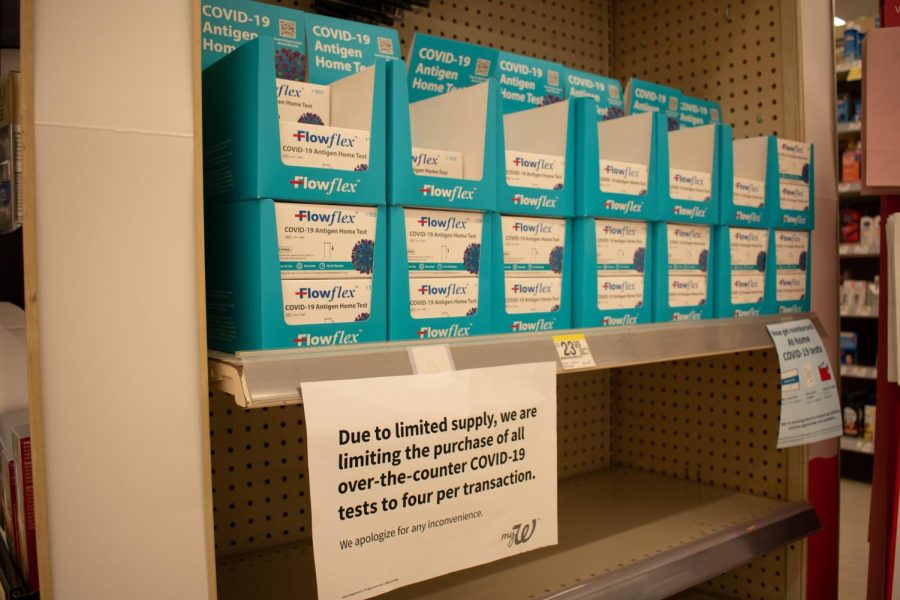 A local pharmacy tells customers that at-home COVID-19 testing purchases are limited. Students at Loyola had a hard time getting tested before getting to campus this semester.

Students struggled with a lack of COVID-19 testing availability as they prepared to return to in-person classes and fulfill the university’s requirement to submit a negative test result before arriving on campus.
Leslie Caleb Williams, a pre-nursing freshman from New Orleans, couldn’t find a test before moving in and had to move-in late amid the surge of the virus’s omicron variant.
“I felt stressed and uncertain about my move-in and the beginning of the spring semester,” Williams said. “I was really looking forward to moving in, so this did not inspire positive emotions.”
Cherie Burke, director of the school of nursing at Loyola, addressed the need for testing before returning to campus. She said that traveling puts the community at risk and testing is needed to make sure everyone is returning to a “cozy,” safe campus.
Burke said that college campuses are vulnerable to disease transmission since everyone is in close quarters. The testing requirement allowed Loyola to separate the positive students from those who tested negative through quarantine, she said.
Williams had scheduled a rapid test at a local pharmacy a few days prior to his move-in date but found that he would get the results a day later than anticipated; he had to abandon his plans of moving in on time.
After finding a rapid-test one day before classes started, he said he was at least able to continue to classes as planned, but he said he worried about out-of-state students where tests are even less available.
Burke said the city of New Orleans has done a great job at making testing available, but convenient options like an at-home test have become increasingly more difficult to come by.
“It’s like when we were children, and we all wanted the same newest video game,” Burke said. “We would stand in line, and hopefully, we would get the toy.”
Michelle Collins, dean of the college of nursing and health, said the university has done its best to obtain tests but that finding them is “a simple matter of supply and demand.”
Collins said that the lack of testing has added to the difficulty of the pandemic.
“Navigating this pandemic has been unspeakably difficult for everyone,” Collins said. “As a healthcare provider, it has been devastating to see the death, the devastation to families, the loss of colleagues from nursing and medicine who are so burnt out that they have nothing left to give and have to back away from the profession. It’s critical that ALL of us do our part to help end this pandemic.”
Burke encouraged Loyola students to reach out to https://www.covidtests.gov/ to order 4 free at-home COVID-19 tests, which usually ship in seven to twelve days.
Burke also recommended that everyone wear a high quality mask upon return to campus, as well as utilize the information and guidance provided at Loyola by sending your questions to [email protected]