Recreational sports back in full force after COVID-19 challenges 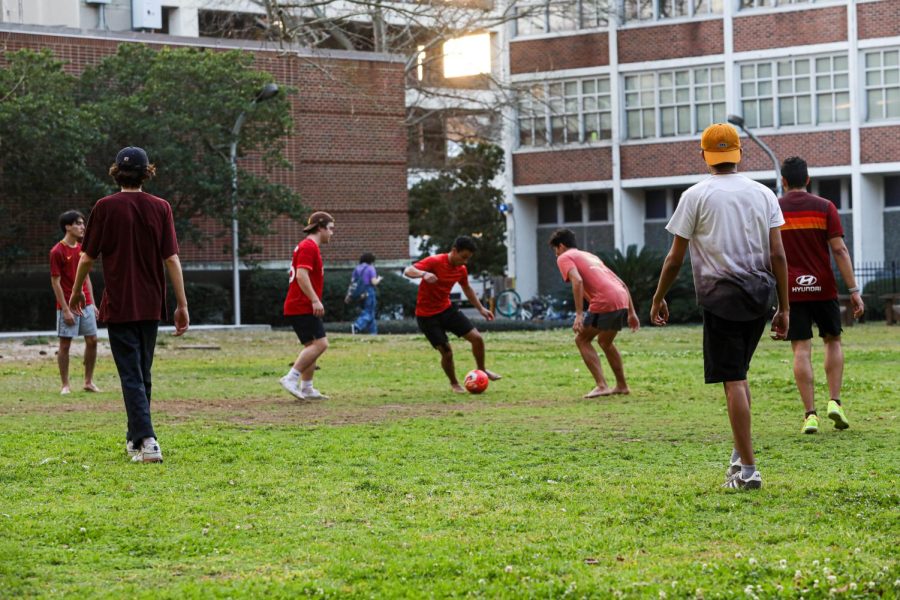 An intramural soccer game goes on in the residential quad on campus Tuesday, March 22. Intramural sports were able to meet this semester for games the first time since the start of the pandemic.

When the COVID-19 pandemic hit New Orleans in March 2020, students traveled home, saying goodbye to their dorms, friends and classes, but many students also left behind a campus favorite—recreational sports.

Now, after two years, campus recreation is finally able to practice as it could prior to the start of the pandemic.

All eight club sports at Loyola have even been given approval to travel again, as the sailing club and spikeball roundnet club plan to compete out of state this semester, Daniel Harris, assistant director of student life, said.

At Loyola, intramural sports are the least competitive level that students can participate in. Club sports are the middle ground of athletics between intramural and the NAIA, as they compete with other club-teams on the Gulf Coast.

As for intramural sports, roughly 400 more students checked in for events this past fall than they did in Fall 2020, Harris said. This shift could be credited to moving activities and events to the Res Quad on campus, rather than the program’s previous off-campus location, according to Harris.

Regardless, Loyola’s intramural and club sports teams were impacted by the novel coronavirus and the separation that came along with it. When students returned to campus Fall 2020, campus recreation was limited to online leagues and socially distanced activities. Fantasy Football League and social media step-challenges were on the list, among others.

Harris oversees all of campus recreation including intramural and club sports operations. He said that the programs had to make adjustments.

“With club and intramural sports, pretty much everything they do is being very close, being sweaty,” Harris said. “It’s a lot of physical contact. That didn’t work when (COVID-19) hit.”

Nigel Tatum, Spanish and Latin American studies junior, has been a part of the soccer club team since 2019. Tatum participated and won this year’s fantasy football league.

“It definitely helped me through the situation because we were able to meet and talk to new people even when we weren’t on campus necessarily,” Tatum said. “That (COVID-19) part definitely affected us, and it was really difficult to connect with people.”

Emily Dieu, psychology sophomore, serves as an intramural supervisor where she oversees event preparation and makes sure the sports run smoothly.

“Intramurals is just a really close community that just loves to get active and have fun,” Dieu said. “It’s not a super competitive or intimidating vibe. It provides an outlet from school to get away from any problems.”

“I feel like a lot of people are intimidated to try it because a lot of athletes involved are good at it, but the truth is intramural is really for everyone of all skill sets,” Dieu said.

Dieu, Tatum, and Harris all shared the same sentiments about the benefits of intramural and club sports at Loyola.

“A lot of our students grew up playing sports in middle school and high school so they come to campus and they yearn to have that structure and that bonding with their friends,” Harris said. “They can get that from intramural and club sports.”

Loyola’s sailing club is ranked nationally, and the rugby club has a strong alumni base in the New Orleans Area, according to Harris.

Tatum said he was shy to join intramural sports as a freshman but is happy he did.

“Because of the fact that we have such a small campus, it’s easy to get in touch with more people,” Tatum said. “It connects you with a greater number of people and you stay connected throughout the semesters and years.”