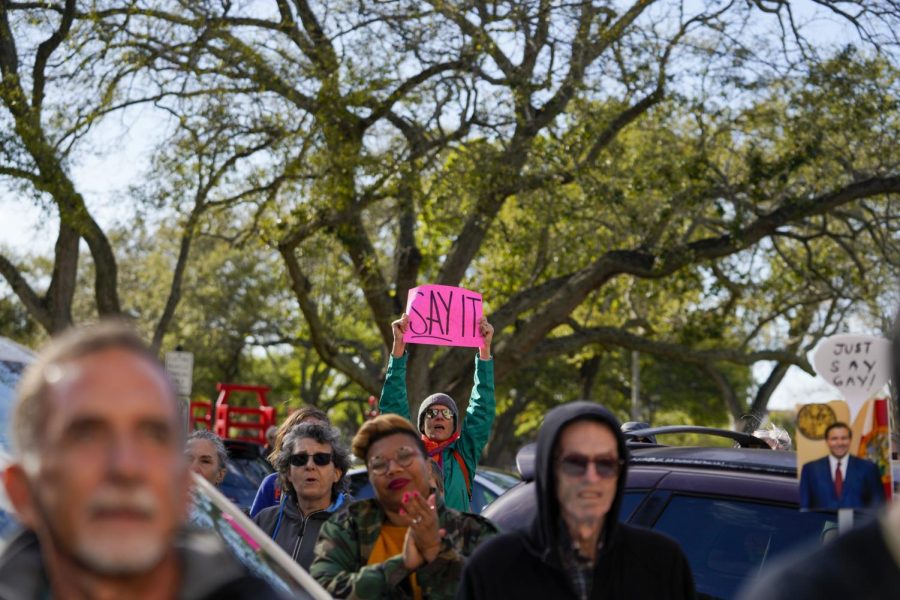 People attend a rally on the steps of city hall in St. Petersburg, Fla., on Saturday, March 12, 2022, to protest the controversial "Don't say gay" bill passed by Florida's Republican-led legislature and now on its way to Gov. Ron DeSantis' desk. (Martha Asencio-Rhine/Tampa Bay Times via AP)

Only three months into 2022, nearly 250 anti-LGBTQ+ bills have begun making their way through U.S. state legislatures.

State-sanctioned homophobia and transphobia is an act of real, physical violence. It strips queer people of their autonomy, increases suicide and mental illness rates, and forces queer people into self-perpetuating cycles of self-hate and shame.

Florida was one of the first states to pass explicitly anti-queer legislature this year, with its “Don’t Say Gay” bill. The bill, which is expected to be signed into law by Governor Ron DeSantis, would ban public school districts from teaching about sexual orientation or gender identity in kindergarten through fourth grade.

More recently, Louisiana has drafted its own version of the “Don’t Say Gay” bill.

If it becomes a law, this bill will be disastrous for queer youth.

Queer children will grow up in a school system that tells them that they need to hide who they are. Instead of being able to cherish the beauty of their whole selves, they’ll be surrounded by shame.

Children deserve to feel safe and respected in their classrooms. Invasive legislature doesn’t prevent kids from being gay or trans; it just makes it more dangerous. Rather than being able to connect with their identities and with their peers, they’ll have to learn everything on their own. There will be no space to ask questions, build community, and find pride in their identity. This is a modern day “don’t ask, don’t tell,” except this time, it’s targeting children.

Legislature like the “Don’t Say Gay” and anti-trans bills assume that queer bodies are inherently sexual. They’re hinged on the idea that queerness is dangerous. Perverse. Dirty.

In many states, bills are being written with the sole intent of making the lives of trans people harder.

In Tennessee, a bill was proposed to allow teachers to deny students of their preferred pronouns. The bill states that teachers and other public school employees would not be required to use students’ pronouns that do not “align with their biological sex.” That’s a long (and bigoted) way to say that teachers can now misgender students.

Misgendering people, especially young people, has real adverse effects. And if this happens on a regular basis, like in a classroom, it slowly chips away at trans people’s happiness and well-being. While misgendering may seem small, small acts of violence build up.

Tennessee is also one of 10 states that has banned trans athletes from playing on sports teams of their gender. Many of these states only prohibit transgender girls and women from playing sports on female sports teams, as lawmakers claim that trans women have advantages over their cisgender counterparts because of their anatomy and hormone levels, even though there isn’t any science or data to support these claims.

In Texas, hormone care is being denied to trans people, and gender-affirming care for minors is being called child abuse.

The truth is that bills like these are stripping away everything that makes life for trans children worth it. Rather than building community, trans children are focused on their survival. Hormone care isn’t child abuse. It’s life-saving, gender-affirming care that is necessary for the survival of trans people.

Studies have found that the chances of severe psychological distress were reduced drastically for trans people who began hormones in early adolescence than for those who began during late adolescence or adulthood.

Texas lawmakers are outlawing the only treatment for those who have been diagnosed with gender dysphoria, and studies by the American Psychiatric Association show that those who have been diagnosed are six times more likely to have a mood or anxiety disorder than the general population, three times as likely to be prescribed antidepressants and antianxiety medications, and more than six times as likely to attempt suicide resulting in hospitalization.

Furthermore, trans people who have undergone gender-affirming surgery are significantly less likely to seek mental health treatment for depression and anxiety disorders years after the procedure.

While Texas is denying hormone treatment to trans youth, New Hampshire is trying to overturn the prohibition of conversion therapy for minors.

Lawmakers are saying that treatment for something that is classified as a medical disorder is child abuse while harmful conversion therapy practices are acceptable.

According to the International Rehabilitation Council for Torture Victims, conversion therapy is a form of torture, and there are no credible scientific studies that show conversion therapy to be an effective “cure,” as homosexuality is not a disease or disorder.

Suicide is the second leading cause of death among young people, and LGBTQ+ youth are four times more likely to seriously consider suicide, to make a plan for suicide, and to attempt suicide versus their peers, according to research conducted by The Trevor Project. Every piece of homophobic legislation makes this worse.

We need to show up for queer youth before it’s too late. Call your representatives. Donate to mutual aid funds. Ask your queer peers what they need and listen.

Homophobic and transphobic lawmakers can talk about “protecting kids” all they want, but the fact of the matter is simple: hateful legislation kills kids. There’s a very real chance that the “Don’t Say Gay” bill will pass here in Louisiana. The legislators who vote for it need to know that there will be blood on their hands.