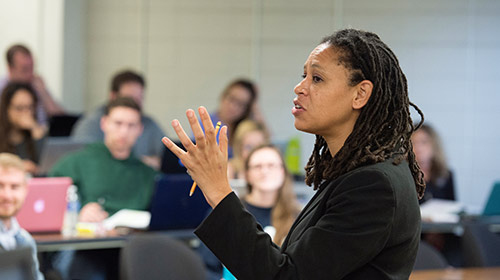 Creating meaningful work that leaves a positive impact on the world is lawyer and professor Andrea Armstrong’s calling at Loyola University New Orleans.

One student who looks up to Armstrong is Meredith Booker, Armstrong’s former teaching assistant and current research assistant. The third-year Loyola law student has learned critical principles of practicing law through Professor Armstrong, she said.

Booker was so moved by Armstrong’s presence in her academic and professional life that she wrote a recommendation letter for Armstrong to be selected for the Loyola University New Orleans’ Dux Academicus Award for 2022.

“She’s impacted my studies not only in the development of my legal skills and investigatory skills but also in just being sure that I ensure that people and humanity are centered at the core of my work,” Booker said.

Booker described Armstrong as “a true embodiment of the Jesuit values of service rooted in justice and love, community engagement through solidarity and kinship, and discernment of the human experience using imagination, emotion, and intellect” in her recommendation letter.

Armstrong, a New Orleans native, is an expert on jail and prison conditions, and she’s led an extensive career in the fields of international affairs, conflict resolution, and human rights before coming to Loyola.

Armstrong worked for the Peace Corps in Turkmenistan before receiving her Master of Public Affairs degree at Princeton University, she said.

She also practiced as a law fellow with David Rosen & Associates in Connecticut with a focus on the rights of the incarcerated and earned her Doctor of Law degree at Yale Law School.

With dozens of publications under her belt, Armstrong came home to New Orleans and clerked for Judge Helen G. Berrigan. But in 2010, two professors from Loyola and Tulane University approached Armstrong with an offer she couldn’t refuse: to become a law professor, and she went for it.

“Between the two of them, they showed me a world I didn’t even know existed, but it turns out that it is the perfect job for me,” she said.

Armstrong has since taught more than one thousand students in incarceration law and policy, constitutional law, criminal law and procedure, law and poverty, and race and the law, according to the Loyola University New Orleans College of Law.

She also co-founded IncarcerationTransparency.org, a student-driven website that provides data about the deaths of incarcerated people in Louisiana.

One thing she didn’t predict before coming to Loyola was that she would create relationships with her students that extend beyond their years in law school, she said.

“To watch them develop as leaders in whatever field they’re practicing in is really one of the best parts of the job,” she said. “I didn’t understand the amount of joy that I would get from seeing them not only excel but lead. And now, I work with them as partners.”

As Armstrong’s students have grown, she said she’s grown as well. Mary Algero, the associate dean of faculty development and academic affairs and Loyola law professor, said she has enjoyed watching Armstrong’s development as a professor over the years.

“It’s just been beautiful to watch her start out traditionally teaching her law classes but then just to watch her bloom like a flower,” Algero said.

She believes that Armstrong’s work goes beyond the classroom and paves a fresh path for others to follow suit. Algero said that Armstrong is fearless, always strives to do more, and doesn’t worry even if she’s trying something new.

“She’s been a trailblazer in a lot of ways because her work has created new pockets of information,” she said.

Algero has also seen Armstrong flourish as a role model to her students, especially for women and students of color.

“Affinity-wise, women law students are reaching out to her, African American law students and other students of color,” she said. “I think we all as students look for people who we think are like us. For Professor Armstrong, that’s a pretty large group.”

Armstrong said her objective in life is to do work in areas where it doesn’t exist, and she’s taught students like Booker to do the same.

“If you see work that needs to be done, do the work. There’s so much work to be done, especially in the space of the criminal legal system and incarceration,” Booker said. “If you have the capacity and the drive to do that work, then jump in and do it.”

Armstrong said that all she wants is for her work to have value to others. Algero confirmed that it does.