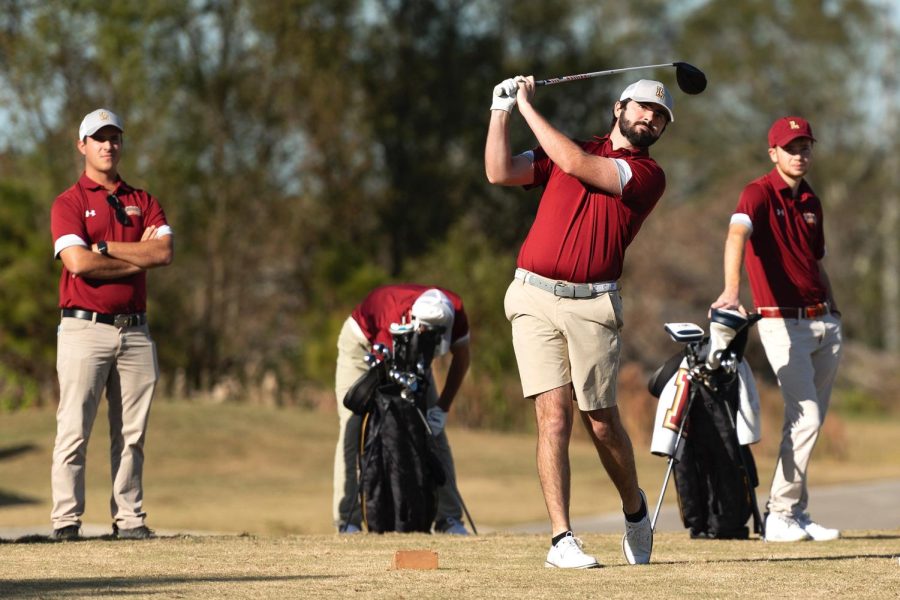 Senior Carter Nicholson swings his club during the fall of 2021 at Lakewood Golf Club. The men's golf team recently won during the Wolf Pack Invitational. Courtesy of Kyle Encar

The men’s golf team took home a win for the first time since 2017 at the 2022 Wolf Pack Spring Invitational this March.

The men won the tournament by two shots and had two players finish in the top five individually after playing in tough conditions with wind speeds over 20 mph. This was the entire team’s first win since playing at Loyola and Cory Amory’s first season as the team’s head coach. Junior Logan Peterson said that he had a lot of faith in his teammates to make the win happen.

“I felt that for the first time our team really knew we could win,” Peterson said. “We didn’t feel like the underdogs this time.”

Despite having confidence, Peterson said he was feeling mixed emotions during the tournament.

“Having the lead with one round left had me feeling very excited but also nervous,” he said. “It was the first time we had a lead at that point since I’ve been in college, so it wasn’t a situation our team was quite comfortable with yet.”

Fifth year senior Carter Nicholson said he hopes that this win will shift the momentum of the team as they approach the conference championship.

“I was glad the team finally got to win, but at the same time, I hope that complacency doesn’t set in,” Nicholson said. “We have a chance of winning conference if we continue to work hard and really buckle down over the coming weeks.”

Amory said he definitely believes that winning the conference championship is possible.

“They are beginning to see that they can compete with anyone,” he said. “They don’t have to do anything special except be tough, practice with purpose, and then trust their abilities. Their success is a byproduct of their habits and attitude.”

The progress Amory has seen this season is part of what has made him so proud.

“They could have finished in last place and I would’ve been proud of who they chose to be as people and competitors that week,” Amory said. “Victory tastes great though, so my hope is that they are hungry for more and that they keep grinding.”

The men’s team will compete in their first round of the conference championship in Greenville, Alabama on April 18.