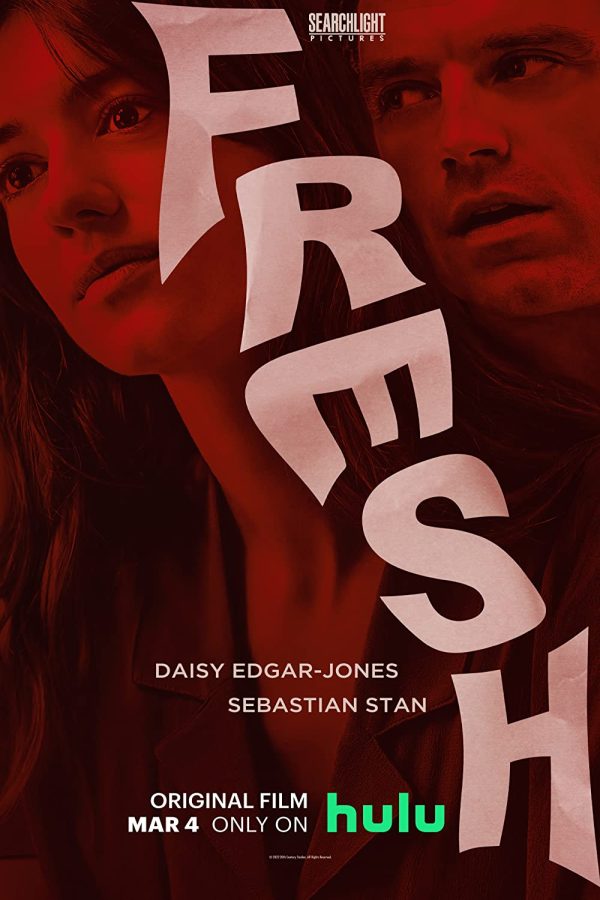 Not so brash as Eli Roth’s 2013 gorefest “The Green Inferno” but not quite as introspective as Julia Ducournau’s debut film “Raw” (2016), “Fresh” is the newest addition to the ever-shocking cannibal horror genre. In her directorial debut, Mimi Cave gets straight to the point, combining shock value, absurdist humor, and a bit of social commentary, all of which add up to a decently solid horror flick. Paying homage to slasher and cult horror films from the 70s and 80s, “Fresh” provides not unheard of but still relevant commentary on the dangers of online dating and the power of female friendship. There’s cannibalism, too!

While the film is uncomplicated and rather predictable, this film has one of the most charming casts of the year. “Normal People” breakout star Daisy Edgar-Jones does her job very well as Noa, and she’s easy to root for and sympathize with, but Sebastian Stan really shines here with that serial killer charm. His performance is not unlike Zac Efron’s as Ted Bundy in “Extremely Wicked, Shockingly Evil and Vile” (2019), one of the only redeeming aspects of that film. Stan is easily the star of every scene he’s in, and it’s very effective in that we feel guilty for rooting for him, too. After all, that’s exactly what predators do. In her first film role, Jonica T. Gibbs does the most she can with her role as Mollie. While Gibbs herself is a joy to watch, she is boxed in as the token Black friend which we are supposed to overlook because she’s also queer! Again, she did the most she could with the role, and there is certainly a bright future for her in film if she is given a well-written character.

“Fresh” is a well-made film. There’s no question about that. Uninspiring? Perhaps. But it does not lend itself to ambitious technical filmmaking. It’s a good-looking, watchable film. The soundtrack is definitely a highlight, with synth-heavy songs of today that, like the film itself, call back to the 1980s. The film is very reliant on special effects with all of its body horror, and the effects are very well done. Most of it seemed to be practical effects, which I always admire.

What caught my attention most, however, was the title card. Title cards are severely overlooked in filmmaking these days, but this film is the exception. It’s a well-designed and fitting font, in a gross, fleshy color. It’s not overly elaborate, but it’s a small detail that clearly was treated like a big deal. I admire that greatly. This film, as predictable as its cinematography and sound design may be, was made with a lot of care, and that is so important and hard to come by now.

The film’s storyline is where I find it lacks the most. Again, it’s not shocking. There is certainly shock value given all of its gore and blood and flesh, but there was no point in time where I couldn’t see what was to come in the next ten minutes. The online dating cliché is also growing outdated. We’ve all heard such horror stories, but this film just takes it to the extreme. Regardless of how over the top the story unfolds, it’s just not very interesting.

Still, the lack of a single “final girl” in favor of three women banding together is a nice touch. It’s a heartwarming end in its own, messed up way. I just found much of the plot and its themes to be very surface-level. Worse, I felt I was being preached to instead of being allowed to deduce the themes for myself, which is one of the worst sins that a filmmaker can commit. I couldn’t help but compare it to Ducournau’s “Raw,” which was an incredibly nuanced body horror cannibal film about womanhood, sisterhood, and whatever else you personally might make of it. It left so much room for interpretation, but “Fresh” unfortunately left no room at all.

Regardless of its simplicity, it’s a good watch. It was entertaining, the cast was incredibly charismatic, and there was all the blood and guts you could hope for. It’s certainly an impressive directorial debut for Cave, and she’s left herself room to grow.