“All of Us Are Dead” review: Campy zombie film meets school life anime 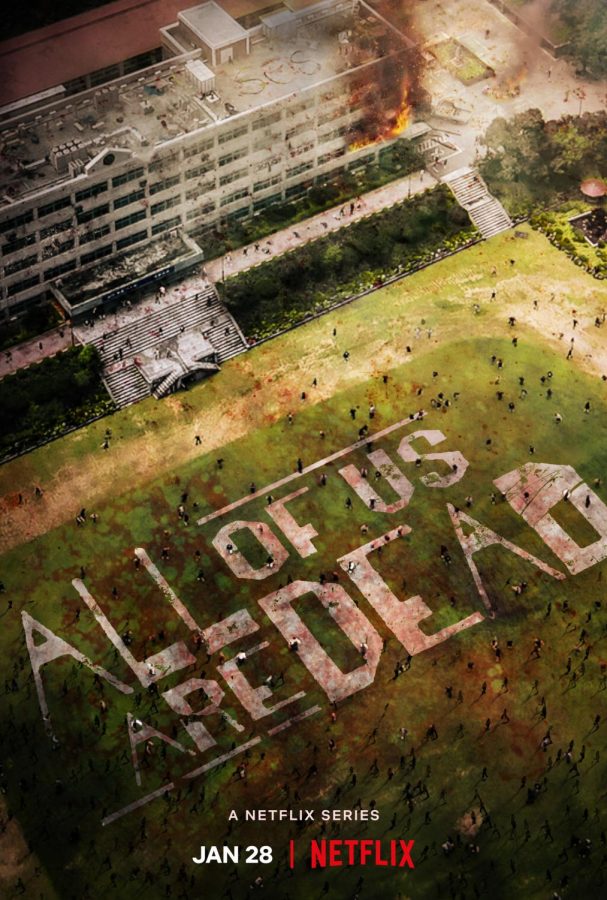 Editor’s Note: The following review has spoilers for “All of Us Are Dead.”

Netflix’s latest Korean series “All of Us Are Dead” is the perfect depiction of anime, K-drama, and campy zombie film mashed into one.

The hodge-podge of fights, bullying, and love triangles raises the stakes high for the main characters: teenagers who go to a local high school. Their survival skills, both dealing with school as well as the zombie apocalypse, must be strong for them to stay alive.

The main conflict of interest is the love triangle involving Nam On-jo (Park Ji-hu), Lee Cheong-san (Yoon Chan-young), and Lee Su-hyeok (Lomon). Early in the show, On-jo confesses to Su-hyeok that she has a crush on him, and he fails to respond before the zombie invasion starts. From the first episode, it is clear that Cheong-san has romantic feelings for On-jo but as her best friend, he keeps his feelings quiet and chooses to tease her instead. Because Cheong-san finds out about On-jo’s confession, he chooses not to confess to her until the end of the season.

Another source of turmoil is caused by the “popular” Lee Na-yeon (Lee Yoo-mi). Is she a friend or a foe? Her character is stereotyped as the “pick-me” girl in the first episode, and while she seems nice to everyone, her actions moving forward are nothing short of deceitful and selfish. She bullies Cheong-san’s best friend Han Gyeong-su (Ham Sung-min) for his family’s lack of money and status. Na-yeon even convinces everyone that Gyeon-su was “turning” when he had never been infected in the first place and results in his death. By the end of the season, we hope to see Na-yeon redeem herself for her past foul actions. When she finally has a turn of heart, however, she is unable to act upon it, leaving us dissatisfied.

Our main antagonist throughout the season, Yoon Gwi-nam (Yoo In-soo), is known for one thing – he just will not die! Despite becoming infected early in the season and suffering several injuries, Gwi-nam keeps coming back. We discover that Gwi-nam is the first of the infected that retains his human mental state after “turning.” This means that he has the physical strength and speed of a zombie, but the mental capability to think and act like a human. Therefore, Gwi-nam is unlike the other zombies in that he can choose not to attack a human on impulse. However, since Gwi-nam is an evil, violent human being to begin with, he decides to infect and kill humans anyway.

Now, is there a meaning behind the order of the student’s deaths? For example, the death of On-jo’s best friend Yoon I-sak (Kim Joo-ah) is the first that impacts the main characters. Most of the plot shifts are based off of the deaths that occur. But is there any real strategy to this? For several of the supporting characters, the death order felt random. Is this randomness purposeful, representing the random events that life sometimes brings us?

The final topic of interest: will Cheong-san return for season two? The last shot of the final episode leads us to believe that it is possible for Cheong-san to return despite what we saw in the last episode. Cheong-san was easily one of the most redeemable characters of the show, starting out by acting like a jerk and turning out to be a caring and protective friend.

Finally, the overall direction and production of the show is outstanding, from the precise fight choreography to the clever use of space. Over 90% of the show takes place in the same setting – the school – and still, every scene comes with a new vibe. The dialogue and plot course makes use of the smallest things to bring the action, and the directorial vision does a fantastic job of capturing the terror and claustrophobic feeling of being trapped in a zombie-filled high school.

To many fans’ delight, “All of Us Are Dead” has been renewed for a second season set to premiere in 2023. Hopefully viewers’ questions will be answered by then, as the next season will explore the students’ lives post-outbreak.

Click here to stream “All of Us Are Dead” on Netflix.