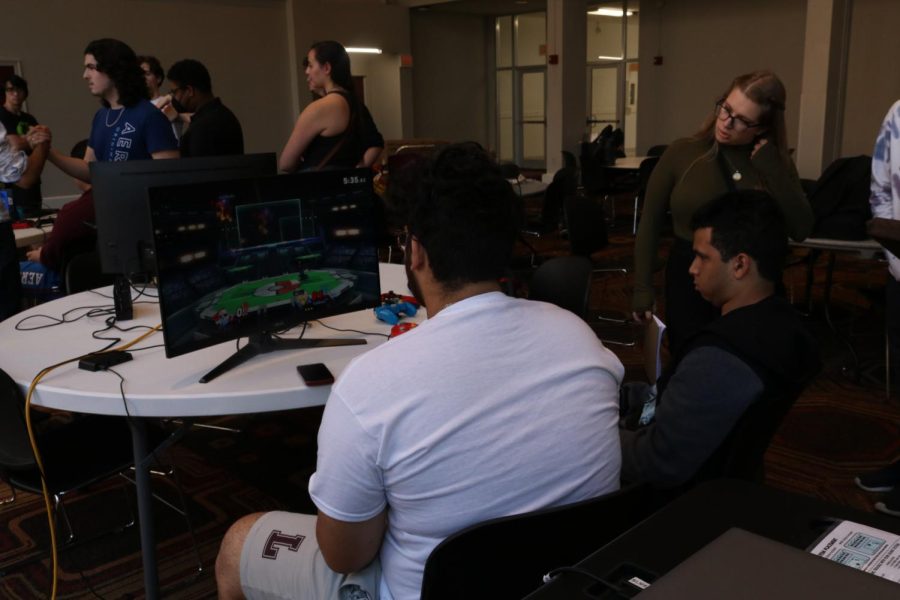 Two players at the Smash Bros tournament on April 8 in the Orleans Room of the Danna Center battle it out in a game. This was the first Smash bros tournament hosted by Esports Head Coach Lumen Vera at Loyola.

Sports at Loyola have expanded beyond the court and onto the computer screen.

Loyola Esports Coach, Lumen Vera, hosted the first campus Smash Bros tournament this past weekend. Vera said the tournament was for students who have a passion for video games.

The tournament was one of the first events Vera has hosted prior to recruitment, which is set to begin next semester. Esports is a new addition to Loyola’s athletic department, which Vera said he is excited to start. Ara Godshall, a senior psychology major, joined the esports discord a couple days before the tournament and said she was excited to be around people who shared the same interests with her.

“It’s an excuse to be around my friends and I just love competing,” Godshall said.

Blair Anderson, a junior English major, also shared his excitement to play. He said Smash Bros is not his favorite game, but he likes being able to be in a tournament with his friends regardless of the game. The more people that sign up also increases the prizes which is a bonus as well, he said.

“Lots of friends signing up; the more bodies, the bigger the cash pool,” Anderson said.

There were 21 competitors, and the winning prize was $250, along with a championship hoodie, T-shirt, stickers, and a $5 Taco Bell gift card. There were also second and third place prizes.

Some students went to the tournament to play, but others simply went to watch. Scarlet Mitchell-Yang, sophomore computer science major, said she did not have a chance to play because she signed up wrong, but she was glad to still watch. Mitchell-Yang said she hopes to play in the next one and not just spectate.

“Both are fun,” she said. “But when you’re playing you’re actually doing something.”

The tournament ended with junior Owen Salinas winning it all. Vera said he sees the event as part of the beginnings of a growing community at Loyola.

“Esports is a vehicle that anyone can use and anyone can thrive in,” Vera said.