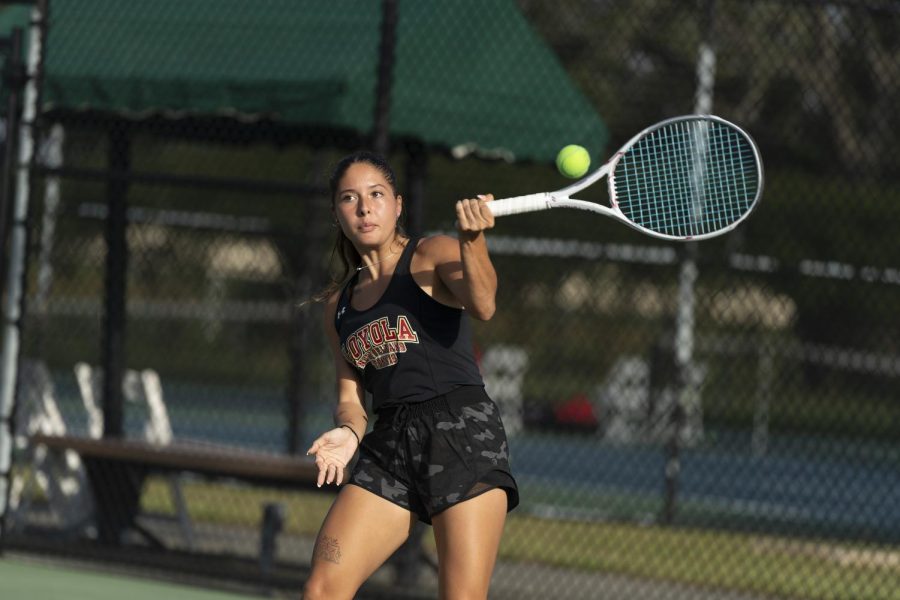 Senior Madelynn Chavez plays at the Xula Tennis Center this season. The women's tennis team hopes to win it all at the SSAC Championship April 21. Courtesy of Wolf Pack Athletics.

The women’s tennis team is ready to ace this month’s Southern States Athletic Conference Championships, and end their first normal season in two years on a high note, according to Head Tennis Coach Matthew Llewellyn.
The season has already started with high expectations according to Llewellyn. The team is currently ranked 17th in National Association of Intercollegiate Athletics women’s tennis, with a 7-10 record and 194 final points from the NAIA Coach’s Poll, according to the NAIA.
The team is picked to finish fourth and rated third overall, according to Llewellyn. He said that the team has below the top 25 rankings. Llewellyn said he has full faith that his players will come out fast and confident to take the trophy home.
“If we play the way we’re capable of and come together as a team we have a chance to win,” Llewellyn said.
The tournament is played to a clench, meaning the first team with four points wins the match.
“Anything can happen in that format,” he said.
They earned the number 12 spot in 2018 and kept up similar momentum through this season having been in the number 12 spot for a good portion of it, according to Llewellyn. He said the COVID-19 pandemic took much of their 2020 and 2021 seasons, including conference tournaments and nationals.
Llewellyn said he believes the team is benefitting from the normalcy and consistency in this season’s training and regular matches. They are making up for lost time and using their last two premature season cutoffs as motivation, he said.
Sophomore tennis player Isabella Leano said the team has been great at handling everything that has come their way.
“We can compartmentalize and put aside everything that is happening off the court in order to devote their utter attention and energy to their match,” Leano said. “This capability gives our team an edge over most teams in our conference.”
Going through the COVID-19 pandemic, Hurricane Ida, and various injuries throughout the last two years brought a new culture of resilience to the team, Leano said.
Llewellyn said the team is using their overcome adversities and their upset against Xavier in February as proof they can win the championships. It was the first time Loyola won against Xavier, who was ranked third for several years, according to Llewellyn.
Captain Madelynn Chavez, a senior political science major, believes the team is more than capable of holding up against top schools at the championships.
“Our hope for the SSAC Championships is to prove themselves and earn that top 10 ranking,” Chavez said.
If the team is focused and healthy with positive mindsets they will have the trophy, Chavez said.
Leano said she also believes they “truly belong” in the top 10 because of how far they have exceeded their own expectations from the beginning of the season to now.
“This sense of unity off the court has inspired a connection on the court that none of us have ever experienced. I can confidently and proudly call each of my teammates my sisters,” Leano said.