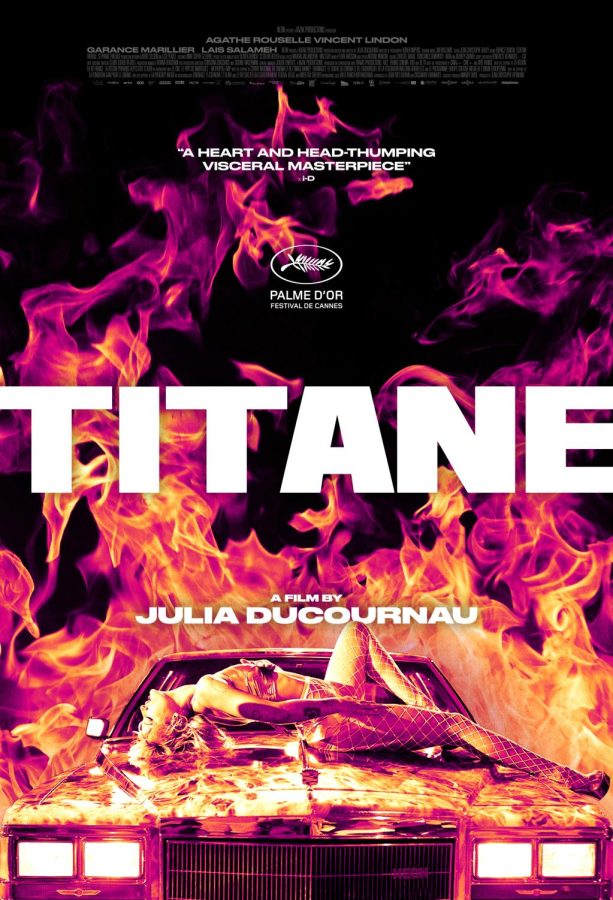 Editor’s Note: The following review has spoilers for “Titane.”

The film opens with our protagonist Alexia getting into a car accident with her unidentified father. She undergoes an experimental procedure that replaces part of her skull with a titanium plate, leaving her with a large scar and a curious attraction to cars. It then cuts to an older Alexia (Agathe Rousselle) as we are transported to a hypersexual world with clearly defined gender roles. We’re at a car show where women in tight clothes sensually dance on the hoods of cars as men ogle, ask for autographs, or attempt to grope them. Our protagonist grinds atop a flame-streaked vintage Cadillac.

Ducournau takes everything we thought we knew about this world and flips it upside down. In a scene filled with heat, passion, and motor oil, Alexia has sex with the car. Soon after, she becomes pregnant. From the car.

Alexia then goes on the run. She disguises herself as Adrien, a boy who went missing ten years prior. Attempting to hide her growing stomach and breasts, she binds them down and shaves her head. She breaks her nose to change her face. The scene is bloody. Violent. Painful. Raw.

It’s reminiscent of every portrayal of transmasculinity you’ve seen. They poorly cut their hair with a pair of kitchen scissors while bracing themselves on the sink, staring into an empty mirror. They bind their chest with ace bandages, a painful image every transmasculine person has seen. It’s almost like “Degrassi” or “Sex Education.”

From the outside, it appears to be the gut wrenching portrayal of a young transmasculine person blooming into their true self. Instead, it’s the opposite. She’s going into hiding.

Adrien enters their new life as a teenage boy with the realization that their time has an expiration date. Eventually, they’ll give birth to their half-baby-half-car child, revealing their true identity. Ducournau sets us up for Adrien’s downfall. We’re prepared for their assumed father Vincent (Vincent Lindon), a hyper-masculine firefighter, to reject them. But it never comes.

Even after their father realizes that Alexia is not his son, he doesn’t reject him. Before Alexia’s identity is revealed, Vincent walks in on them in a yellow dress. Rather than rejecting them for failing to perform masculinity, Vincent loves Alexia more every time they fail.

Adrien begins to work at the firehouse and continues failing to perform masculinity. Each time, Vincent reinforces his love. Becoming weaker with age, Vincent injects steroids to retain muscle mass. He often messes up his doses, either passing out or getting sick.

In film, especially horror, trans bodies are framed as monstrous. Ducournau doesn’t reject this but instead reframes it. All bodies are monstrous, trans or cis. Bodies are horrifying. They cause us pain. They fail us.

In “Titane,” Ducournau plays heavily with the idea of gender as a performance. It’s a set of protocols we must follow to be successful in our environments. Ducournau attempts to turn transphobic media tropes on their sides, equating everything but Alexia’s perceived transness as a monstrosity. At the same time, the film heavily hinges on shock. From multiple graphic sex scenes between car and human to the gory violence, Ducournau leans into taboo territory.

The French director’s attempt to reclaim transphobic cinematic tropes is both a hit and a miss. While she dismantles gender roles and exposes it as a mere performance, she also walks the line of using transness as a gimmick. By using a cisgender character’s murderous tendencies and mechanical attraction as a reason to falsely transition, she falls dangerously close to equating transness with deviance.

Depending on the viewer’s interpretation, “Titane” either acts as a satire on transphobic cinema or as a sex-saturated, shallow trans allegory.