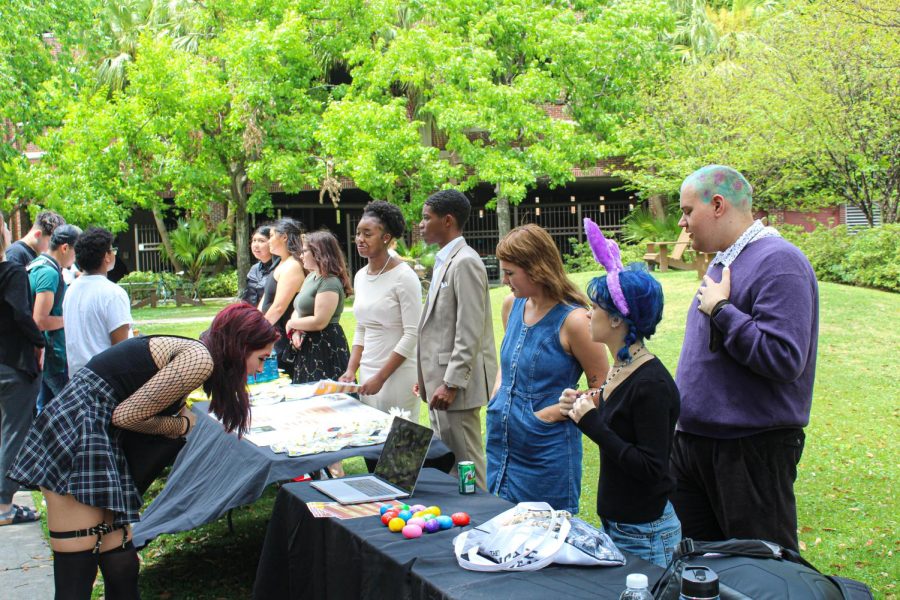 SGA presidential and vice presidential candidates talk to students during the SGA Meet and Greet on April 13. Adele Colson and Jospeh Pitre, Robert Morrison III and Destiny Sanders, and Stephanie Oblena and Vivian Alvarez are all competing for the positions, despite a delayed election season.

Despite a delayed election, three people are running for student government association president and vice president.

The duos, Adele Colson and Jospeh Pitre, Robert Morrison III and Destiny Sanders, and Stephanie Oblena and Vivian Alvarez are all competing for the positions.

Campaigning will resume on April 18 and run through April 29, and voting will take place on May 2 and 3, with winners announced on the 4.

Psychology junior Adele Colson and Joseph Pitre, criminology and political science junior, are running for SGA president and vice president for the 2022-2023 academic year on a three-tiered platform of administrative stability, community engagement, and inclusivity.

Colson, who is running for president, is a senator for the College of Arts & Sciences, a member of the university honors program, and is currently studying abroad in Spain. Off campus, she served as a regional and national board member for North American Federation for Temple Youth: The Reform Jewish Youth Movement and works in gun control and racial equality advocacy, she said.

Her vice presidential running mate, Pitre, is the student life coordinator for the University Honors Association, a senator for the College of Arts & Sciences, and the diversity, equity, and accessibility officer for the state chapter of College Democrats. Pitre previously served on the diversity, equity, and inclusion committee, the university programming board, and the first year council. In addition, he served as the chair for the student peace initiative this year. He currently works at the Women’s Resource Center and previously worked in the Office of Equity and Inclusion.

Their campaign, which they have titled “from art to action,” centers around equity and inclusion through art and creative expression, according to Colson.

For their inclusivity platform, Colson said she wants to bring the community together through student-led programming and art. The duo plans to start a lab fee fund to help students pay for classes with additional fees, like studio arts, digital media, and science lab classes, Colson said.

Pitre said he wants to start an intercommunity dialogue where all student-led organizations come together to discuss their goals and needs.

“We’re really pushing for student orgs to work together, so that not only are they like bringing their own community closer together, they’re bringing communities in general together,” Pitre said. “Perhaps they’ll open up to new audiences they wouldn’t have expected.”

Pitre said that he wants their plans implemented, and he wants them to last. He said the duo plans to strengthen the sustainability committee, form a student relations board, and work on SGA member retention.

“There’s really a big problem with attracting people to SGA and keeping them in those positions,” Pitre said.

To remedy this, Pitre said he hopes to build a universal calendar with all important SGA events and office hours.

In addition, Colson said that they would not be increasing SGA cabinet stipends and would instead allocate money towards community enrichment and arts.

Colson said that they’ve been joking about being the gay ticket, making them more marketable.

“We are both two white presenting people in a very diverse campus running against non white candidates,” Pitre said. “So I feel like sometimes people like just push us aside if we don’t have like something that sparkles.”

The duo is running on a platform of student quality of life, accountability, and student body-student government relations. Oblena said the ticket has a “student-centered and student-powered vision.”

Oblena is currently a senator-at-large for the College of Arts & Sciences, a krewe leader, and a student ambassador.

Alvarez is a justice for the SGA Court of Reviews, the secretary of the Pre Law Club, the secretary for the National Society of Leadership and Success, and a general member of Loyola University’s Community Action Plan. She previously served as the service coordinator for the University Honors Association and as a member of the university programming board.

Oblena said that during their time on SGA, the duo has heard from a lot of students who haven’t felt served by their representatives. She said she wants students to know what SGA does and to feel comfortable approaching them.

“It’s really hard adjusting back to a really active campus life coming out of COVID,” Oblena said. “We definitely want to help support the student body and make sure that they know that SGA is there for them, and that they have the resources they need.”

Oblena said that the most important piece of their platform is student quality of life, which she said they want to address through health, safety, and dining programing. Oblena said she wants to start a sexual assault prevention program, including self-defense classes and bystander awareness training.

“My hopes are that, as a whole, (training) would help not only just raise the awareness, but the instinctual consciousness within our student body,” Oblena said.

Alvarez said she’d like Iggy’s Cupboard to have more ready-made meal options, as many students don’t have the time or resources to cook.

In addition, Oblena, who is the chair of the SGA sustainability committee, said they want to strengthen sustainability efforts by moving forward with the development of the Green Fund, a student-led and funded sustainability fund. Oblena said she hopes to work with the university to reduce the amount of single-use plastic and build green infrastructure, such as bioswales.

To alleviate stress surrounding housing, Oblena said she’d like to work with residential life to make on-campus housing application-based beginning sophomore year and have financial aid be included in the housing selection process. Currently, some upperclassmen are struggling to find on-campus housing due to limited dorm space.

“I feel like and what a lot of students also don’t know is that we have direct, not necessarily control, but we have power in the hiring decisions,” Alvarez said.

To improve student perceptions of student government, Alvarez said she wants to advocate for all students, even those who aren’t heavily involved on campus. She said she wants students to feel like they can actually receive help on campus and that their money is being put to good use.

“SGA serves everybody,” Alvarez said. “You don’t have to be involved in anything for SGA to serve you.”

The duo is running on a three-pillar platform of creating a better student experience, a safer and more inclusive Loyola, and an SGA that represents “you”, Morrison said. Their ticket is centered around “creating your Loyola,” Sanders said.

Morrison currently serves as the SGA chief of staff, and previously worked as a senator at large and on the First Year Council. He is also the director of operations for Lemon Pepper, treasurer for the Rho Epsilon chapter of Alpha Phi Alpha. He previously worked on campus as the president of the Multicultural Leadership Council, treasurer for the Black Student Union, and student ambassador.

Sanders is currently an SGA senator at large and the speaker of the senate and previously served on the First Year Council. She also serves as a Krewe leader, campus ambassador, the president of the National Panhellenic Council, director of business affairs for Lemon Pepper, and the secretary, treasurer, and Ivy Leaf reporter for the Eta Theta chapter of Alpha Kappa Alpha.

To create a better student experience, Sanders said that they want to work with administration to bring Loyola out of the past and develop an app that would contain everything available on LORA, as well as a campus calendar, and a schedule including athletics. Sanders also said she wants to start Midnight Madness, an event where students can meet campus athletes, to help bridge the gap between athletics and the rest of student life.

In addition, Sanders said she hopes to partner with local businesses to start a student discount card, which would give students 10-15% discounts at local establishments.

On the pillar of creating a safer and more inclusive Loyola, Morrison said he wants to mandate diversity, equity, and inclusion trainings for all professors, which he said Kedrick Perry, Vice President of Equity & Inclusion, is already working on.

Morrison said he also plans to pilot a program called Connect to Loyola, which would connect first year students with groups that fit their needs, such as Black Student Union or Plus+.

“We want them to have an easy flow into their college experience,” Morrison said.

Morrison said he wants to ensure that students are taken care of both physically and mentally, so he’d like to advocate for two mental health days a semester, where students would be granted grace on attendance and minor assignments.

To create an SGA that represents you, Sanders said she wants to create a committee of both commuter and on-campus residents that meets to voice their concerns with their living situations.

“I know sometimes a lot of people say they don’t know what we’re doing, or they see us doing stuff, but they’re not sure what it is,” Sanders said. “So this will be an opportunity for students to come and hear our progress, like a progress report.”

Sanders said she also wants to revamp the existing PAWS and Reflect training with updated information and make it mandatory for all SGA members.

“At the end of the day, this is just to elevate the student experience and uplift students at Loyola and to really show them that they matter and that they’re more than just a number,” Morrison said.