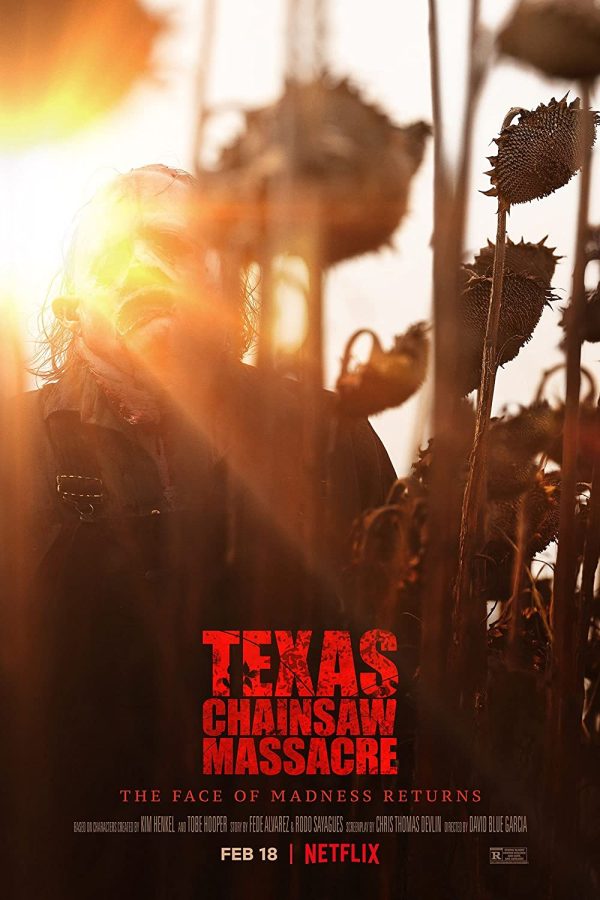 Director David Blue Garcia, alongside Netflix and Legendary Entertainment, reintroduces audience members to an iconic masked killer after nearly 50 years in “Texas Chainsaw Massacre.” Released Feb. 18, the slasher film is the direct sequel to the 1974 classic and is the ninth installment of the overall franchise.

Set in rural Texas, the plot follows a group of young influencers hoping to auction properties in a ghost town for content. Shortly after their arrival, they have an unsettling encounter, unaware that this is the first of many to come. Ultimately, their fate is met by a serial killer by the name of Leatherface, the villain in all nine establishments of the series.

Given the name Leatherface because of his liking for human flesh masks, he sets out to wreak havoc on the town’s newcomers following his signature. While this seems spine-chilling, the way Leatherface is portrayed in the 2022 film falls short of scary, especially considering his long terrifying reputation.

Aside from having a weak antagonist, the overall shock value necessary for an effective horror movie is entirely absent. As the plot drags on, it becomes obvious to anyone watching just what happens next. The killer’s plan seems to be apparent from the start, leaving viewers no room to wonder and no room for any actual scares. And while gore is certainly present, it contributes nothing to the movie’s ultimate goal of instilling fear in the audience, and its shock value wears off after a while.

Furthermore, the cast (including lesser-known actors such as “Eighth Grade” star Elsie Fisher, Sarah Yarkin, and Mark Burnham) do nothing for the film. While this might be a result of the weak script, their lifeless acting nonetheless makes it even harder for the viewer to stay invested to the end of the story. It seems that both the acting and the characters lack in depth that could have potentially enhanced the storyline. Without it, we are left bored and ready to look for something else to watch.

Overall, 2022’s “Texas Chainsaw Massacre” is not worth clicking on. The storyline is predictable, the acting is mediocre, and the film is sure to leave viewers unsatisfied.