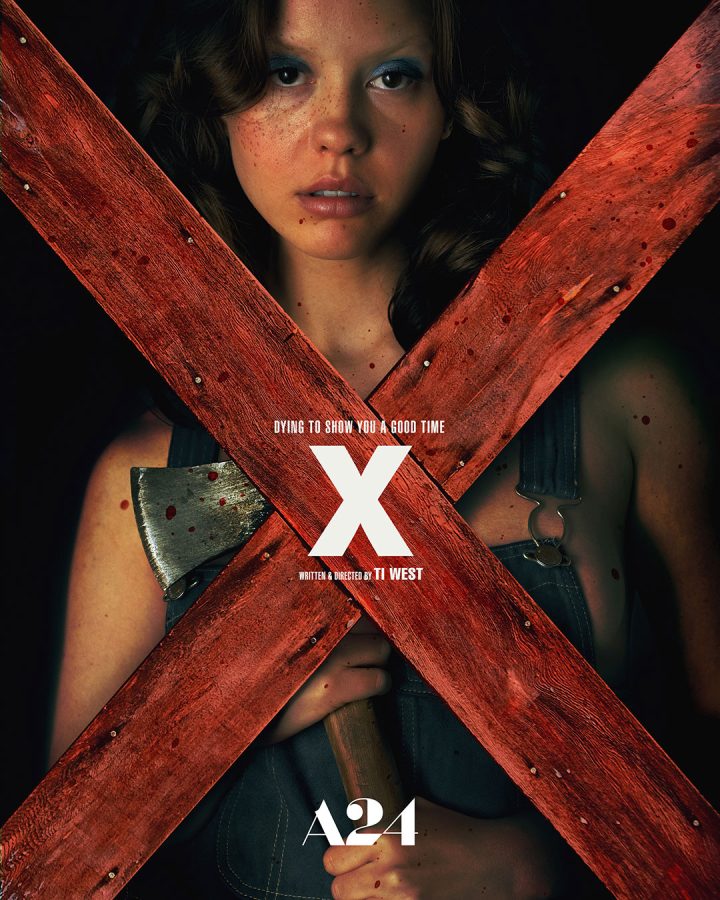 Set in 1979, a gang of amateur filmmakers travel across the Texas boonies to shoot an adult film at an old farmhouse owned by a seemingly harmless elderly couple. However, their producer Wayne, played by Martin Henderson, underestimates the couple’s intentions. Soon, he and the rest of his crew, played by Mia Goth, Scott Mescudi, Brittany Snow, Jenna Ortega, and Owen Campbell, will descend into a hellish blood-curdling night.

One of the many aspects that makes “X” pulse with such authenticity is how it plays into familiar character archetypes from classic slasher films so effectively. For instance, Snow’s actress Bobby-Lynne bears a resemblance to the likes of P.J. Soles’ character in John Carpenter’s “Halloween” with her bouncy-blonde appearance but mean-spirited personality. Campbell’s director RJ portrays the nerdy male character who remains distanced from the rest of the group, but because there is a tiny spark of self-awareness, he is more prone to noticing some bad omens around him. There are also jock-like characters whose big egos and cockiness tend to get their best, and last but not least, the iconic “final character” who outlives their peers but may or may not survive the night.

In addition, the film hosted many actors with diverse backgrounds. Goth, who plays aspiring porn actress Maxine, had prior experience working with art-house directors such as Claire Denis, Luca Guadagnino, and Lars von Trier. Ortega, who plays RJ’s girlfriend and quiet bystander Lorraine, is a former Disney Channel actress who recently starred in horror films like “Scream 5” and “Studio 666” this year alone. Mescudi, also known as rapper Kid Cudi, and who plays adult film star Jackson Hole, has starred in several movies in the past several years, notably in last year’s Oscar-nominated “Don’t Look Up” and Luca Guadagnino’s 2020 HBO mini-series “We Are Who We Are.” West’s ability to direct actors who face somewhat different approaches to their typical roles makes itself apparent and shines from start to finish.

While the editing and sound design were both solid, I felt it could’ve gone a little further to peak my interest as a period piece. Being someone interested in all things 1970s grindhouse and midnight movie culture and knowing that this was a homage, I suppose I was hoping to see more of their distinct qualities expressed in the film’s technicality and not just in the story and characters. There were times when I could tell it was a movie released in 2022, as improving the grainy visuals and color-grading could’ve gone a long way for the cinematography and authenticity of the material.

In addition, 1970s-stylized cinematography usually consisted of zooming in on subjects no matter how close or distant they were in the overall composition, which I feel the film could’ve easily incorporated. Besides, the first half didn’t compel me as much as I’d hoped. But on the other hand, the soundtrack included some of my favorite hits from Blue Öyster Cult, Fleetwood Mac, and Foghat, which I can safely say helped me get into the groove of things after a slow-boiling start.

A frequent comparison many audience-goers and critics have made about “X” is its similarities to Tobe Hooper’s 1974 classic “The Texas Chain Saw Massacre.” Both films follow a similar premise: a gang of young people traveling in a van seeking a good time and some refuge but who are unaware of the horrific consequences that follow. Over the past five decades, many new slasher flicks, remakes, sequels, and retellings of the classic tale have sat on the shoulders of Hooper’s masterpiece for direct or indirect influence.

However, I believe that very few have stood up and attracted such a crowd with praise in the way “X” has. Without giving anything away, there is a variety of themes to gloss over: sexual repression, aging, loss, evangelism, hedonism, and the American Dream. It would probably be a hassle to go over all of these themes that could potentially pave the way for spoilers, but what I can say is that they all efficiently weave together to create an adrenaline-pumping, explosive second act.

While not perfect or for the faint of heart and, which also may cause distance between you and your grandparents for some time, “X” is an outrageous, gruesome, and provocative horror film not to be missed. So, consider rounding up your buddies one night for one helluva picture show that you will never forget.

“X” is now available to rent or buy online.