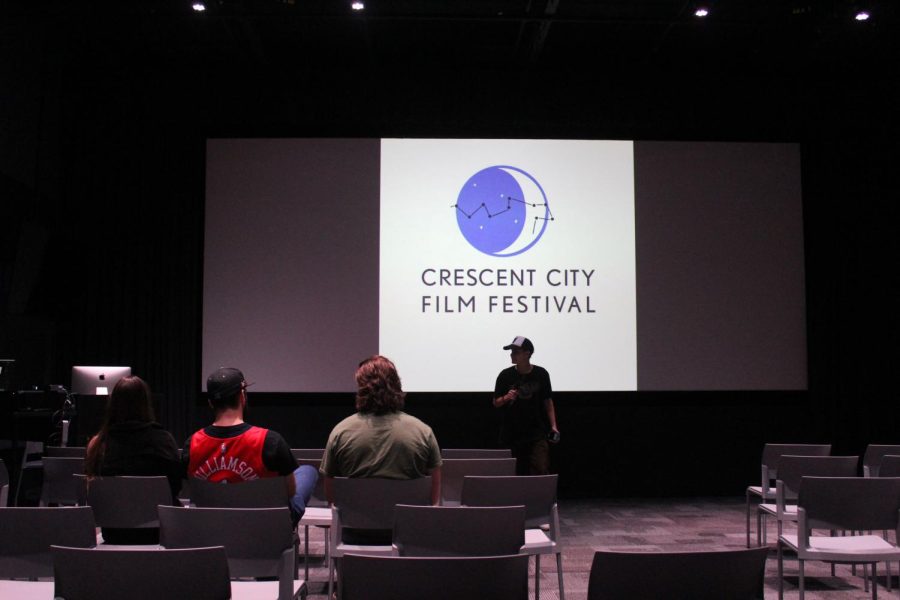 Students wait for a film screening to begin at the Crescent City Film Festival April 22, 2022. This is the fourth year that Loyola's filmmaking department has put on the festival.

The three-day event featured more than 50 films ranging from silent black and white shorts to full-length Westerns that were selected by the film festival programming class taught by Sekuler.

The festival intends to provide a platform for young and emerging filmmakers, according to a festival press release. The event was almost entirely student-led with junior Mia Upshaw serving as the executive director, junior Carmen LeJeune serving as the artistic director, and freshman Camila Capriles serving as the head of publicity for the program.

Opening on Earth Day, April 22, the program showed environmental shorts, followed by a program centered around social justice, international stories, and horror shorts on day two. The festival concluded its events with films from Louisiana locals and seniors in the digital filmmaking program.

Many of the programs within the lineup featured Q&A sessions with directors and producers of the showcased films.

Louisiana native Bradley Gueho’s short film “11” was shown in the Louisiana’s Own portion of the festival.

The eleven-minute film told the story of basketball, friendship, and taking a chance on yourself. It was Gueho’s senior capstone project at LSU and his first-ever short film, which he directed, edited, and produced.

“The people I got to work with were the best,” he said, “There’s a lot of love that goes into it, and I could feel it.”

The best films were selected by a three-person jury, featuring students Paulette Argeres, Maggie Chreene, and Ver Lumod, who serves as The Maroon’s reviews editor.

Best Narrative Short: “The First 280 Honest Words of my Life”

The festival was live streamed and made available to watch via Facebook.