“Everything Everywhere All At Once” review: An indie guide to the multiverse 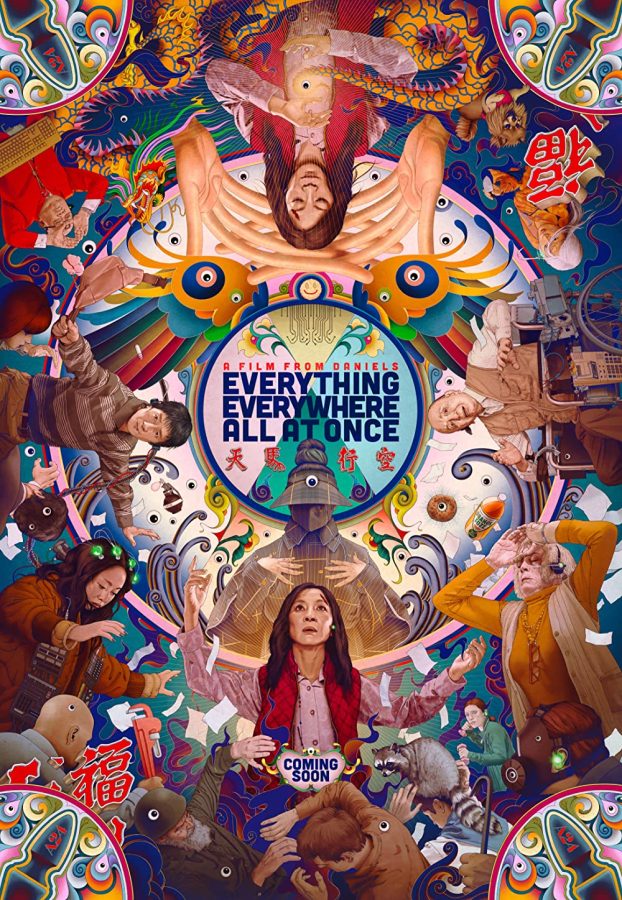 A24 and director duo Daniels (Daniel Kwan and Daniel Scheinert) take on the multiverse in the sci-fi action comedy “Everything Everywhere All At Once,” a cinematic juggernaut of epic proportions that somehow manages to have a genuine emotional core, something that modern blockbusters simply don’t have anymore.

The film follows Chinese-American immigrant Evelyn Wang (Michelle Yeoh), who runs a laundromat with her husband Waymond (Ke Huy Quan). Her business has been audited by the IRS in the form of intrepid inspector Deidre (Jamie Lee Curtis), and to make matters worse, Evelyn has a volatile relationship with her overbearing father Gong Gong (James Hong) as well as with her daughter Joy (Stephanie Hsu), who wants her mother to accept her girlfriend, Becky (Tallie Medel).

These everyday struggles are nothing compared to what Evelyn discovers: a series of parallel universes influenced by every choice she has made in her life. As she gains the ability to “verse-jump” through several timelines (which includes a “Ratatouille” parody, a kung fu-meets-Wong Kar Wai pastiche, and a tender romance involving hotdog fingers, among others), she is also tasked with saving the multiverse from Jobu Tupaki, a power-mad villain she created out of her bad decisions.

Yes, “Everything Everywhere All At Once” delivers on its title. I have reasonably tried to talk about the film as out of context as possible, without spoiling anything. I can only hope to entice anyone into seeing it, which is a testament to the unique storytelling that the directors Daniel have brought to the table ever since debuting with the surreal “Swiss Army Man” in 2016. That they have managed to take the nonsensical and turn it into something entertaining is nothing short of amazing.

Long hailed as the saving grace of indie film, A24 now tackles the multiverse, a trope that has recently inundated pop culture ever since the Marvel Cinematic Universe (MCU) introduced the concept (in fact, “Avengers” directors Anthony and Joe Russo are among the film’s producers). That the film provides an indie alternative to the exhaustive nature of how the MCU tackles the multiverse shouldn’t be overlooked. Never burdened by the weight of several previous media pieces in order to fully articulate the concept, Daniels goes all in. At the same time, they also make sure to dole out the exposition (through Waymond’s Alpha variant) so as not to sacrifice the film’s pacing, making it reasonably easy to follow.

In addition, the film’s exploration of the multiverse also lends itself to existential concepts very well. Learning about Evelyn’s parallel lives, the viewer sees many versions of what could have been if Evelyn did this or that in her past. As the multiverse opens up avenues beyond her being a struggling laundromat owner in the present timeline, the film then uses this to its existential advantage. As our Evelyn starts accessing skills from her parallel counterparts in her quest to save the multiverse, we also get to see how she gains the will to make her life better, for herself and for everyone else.

The ensuing emotional roller-coaster makes “Everything Everywhere All At Once” worth watching beneath all the multiverse mumbo-jumbo. As an Asian person, it certainly felt good seeing people like me on the screen, living normal lives and dealing with normal problems. Add to that the endless cinematic possibilities of the multiverse, and you just know I’m in for the ride.

But what truly separates this film from a lot of blockbusters is how it takes the multiverse and uses it to reckon with generational trauma in a way that feels earned. I cannot stress enough how many times I teared up when Evelyn tries to patch up her relationship with her daughter, as well as dealing with the weight of expectations set forth by her father and the possibility of falling out of love with Waymond. These are real people with real problems, and it just makes me feel overjoyed that I’m being represented.

No movie featuring the multiverse is ever easy to follow, and as such “Everything Everywhere All At Once” is not without its flaws. But it more than makes up for it by going all in on its genre anarchy. This film is, well, everything: multiverse, generational trauma, Asian-American representation, the struggles of relating to your queer children, existentialism, paying your taxes, etc. I could go on and on. And this should be reason enough to see it on the big screen right now.

“Everything Everywhere All At Once” is now showing in theaters.