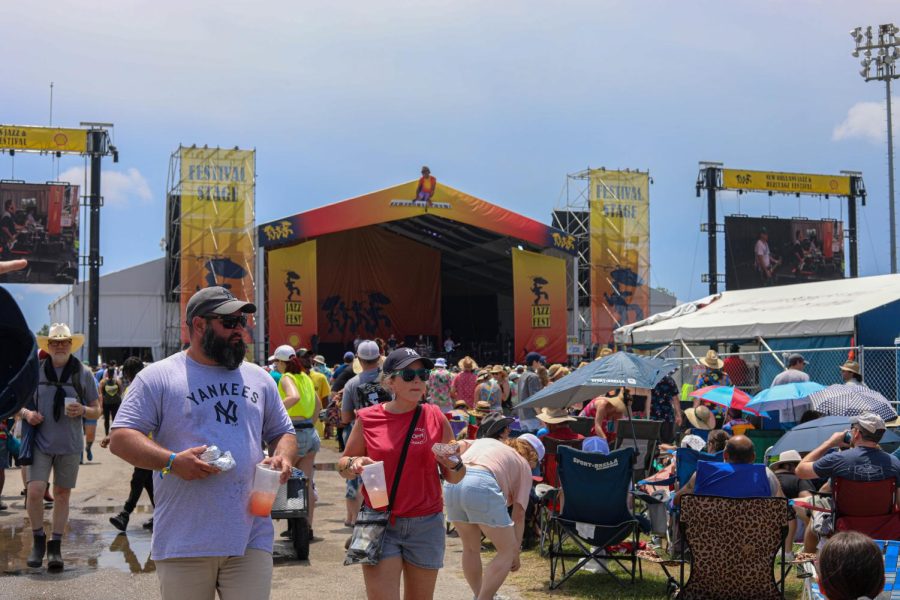 Festival goers wander past Jazz Fest's Festival Stage May 1, 2022. Ten professors and one student performed at the festival over its first weekend.

As the New Orleans Jazz & Heritage festival made its return to the city over the weekend, a few Loyola students and professors were among the hundreds of musicians who took the stage.

Ten professors and one student performed at the Fair Grounds and Slots over the weekend, according to a release from Loyola’s College of Music and Media. Loyola Senior Zahria Sims was the only student to perform during the festival’s first three days. Sims said she’d been dreaming of making her Jazz Fest debut for years.

“This is something I never saw coming, at least not this quickly in my career,” Sims said. “I’ve gone to Jazz Fest so many times in the past and always looked up to the musicians, and to say that I’m one of them – that’s going to be on stage is honestly insane.”

Sims, who plays the tenor saxophone, said she was most excited to perform in the festival’s Jazz tent because she said it was always the first stage she’d check out whenever she attended Jazz Fest as a fan.

“My favorite musicians come through there, people I listen to the most, you know,” Sims said. “It’s cool that I’m able to share a stage with them.”

No Loyola student or faculty member performed on a bigger stage last weekend than Jane Gabka, oboe instructor, and John Reeks, clarinet instructor, who helped fill out the woodwind section for legendary rock band The Who’s festival closing performance Saturday, April 30. Reeks said he grew up when The Who were at their peak of popularity and that he was most excited for the opportunity to play in front of such a big crowd.

“It’s going to be a large crowd, and I was thinking ‘wow, this is going to be great.’Then, I sort of got a reality check because I remembered The Who played at Woodstock, so they’ve seen way bigger crowds than this,” Reeks said.

Reeks also said he’s glad that he’ll actually get to play significant parts in the agangments of some of The Who’s classic songs rather than just being used as “background noise” as he’s seen other rock bands use orchestral sections.

“The arrangements they made are really good,” Reeks said. “For example on ‘Baba O’Riley’ the synthesizer part will be played by the orchestra, stuff like that. It’s really, really well done.”

More Loyola students and professors will take the stage next weekend for the festival’s final four days, including a performance Friday morning by Loyola’s student jazz ensemble.

Check out this comprehensive schedule of all the remaining Jazz Fest performances by Loyola students and faculty: