EDITORIAL: This isn’t just about abortion 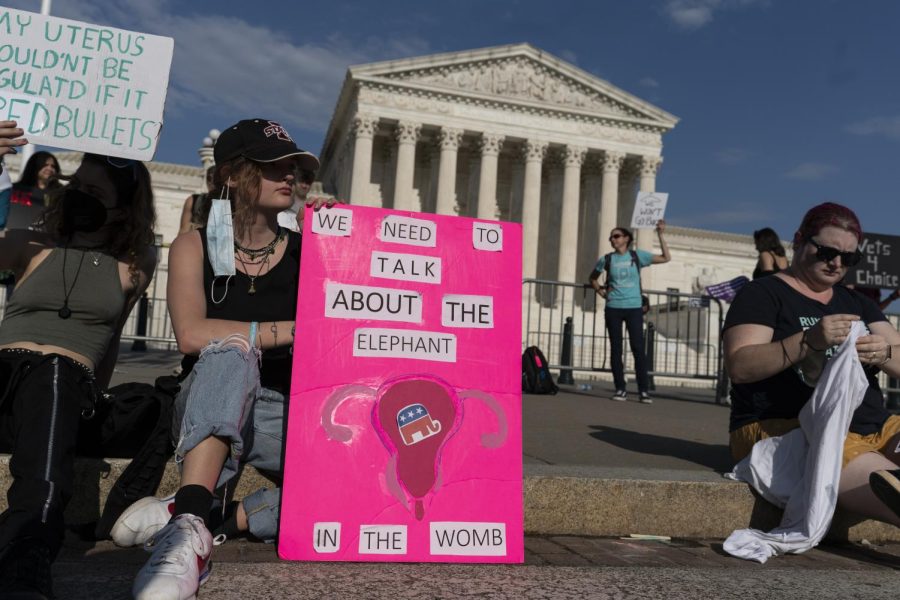 Demonstrators protest outside of the U.S. Supreme Court Wednesday, May 4, 2022 in Washington. A draft opinion suggests the U.S. Supreme Court could be poised to overturn the landmark 1973 Roe v. Wade case that legalized abortion nationwide, according to a Politico report released Monday. Whatever the outcome, the Politico report represents an extremely rare breach of the court's secretive deliberation process, and on a case of surpassing importance. (AP Photo/Alex Brandon)

As the Louisiana legislature eagerly waits for the U.S. Supreme Court to overturn Roe v. Wade, the implications of this possible decision impact more than just abortions.
On Monday, a draft of a Supreme Court opinion that would overturn Roe v. Wade was published by Politico. On Tuesday morning the court confirmed its authenticity, and we’re afraid of the consequences.
We recognize that Loyola is a Catholic institution that officially stands against abortion, and we respect that. We also believe in a person’s right to privacy, bodily autonomy, and access to health care.
Roe v. Wade establishes protection for people seeking to decide the fate of their pregnancies, but it goes further than that. The case established a precedent that access to safe and legal abortion is an individual’s constitutional right.
The intal Roe v. Wade decision was built upon the 1965 U.S. Supreme Court ruling of Griswold v. Connecticut, which stated that the Constitution protects married couples’ right to privacy when deciding if they would like to use contraceptives. The court used this right to privacy foundation in the initial Roe v. Wade decision, saying that the right of privacy includes a woman’s decision about her pregnancy. According to Cornell Law School, the right to privacy is a right that prevents undue government intrusion into fundamental personal issues and decisions.
The implied right to privacy ​was supported by the personal protections stated in the First, Third, Fourth, Fifth, and Ninth Amendments. Roe v. Wade’s decision was also assisted by the 14th Amendment, which addresses the concept of individual liberty. The court ruled that the 14th Amendment was broad enough to include a person’s decision of whether or not to end a pregnancy.
The implications of abortion rights falling back into the hands of states are significant. First, 13 states across the country, including Louisiana, will enact “trigger laws” that immediately ban abortion once the Supreme Court decises to overturn Roe v. Wade.
The Louisiana Human Life Protection Act states that in the event that Roe v. Wade is overturned, abortion in all aspects is illegal. While this act specifically states that access to contraceptives will not be impacted, the opinion is written to allow for open interpretation by the state.
The 14th Amendment is at the core of this discussion as it was used to grant individual liberty to each person without government intervention. That indivuidal liberty has been used to decriminalize sexual conduct between same sex individuals, support the court’s decision to grant marriage equality, and uphold an individual’s right to marry any race without government intervention violated.
If combined rights listed in the Amendments that help to support Roe aren’t enough to keep it from being overturned, what’s to say that these other protections and rights aren’t up for grabs as well?
According to the leaked opinion, the court believes that while the 14th Amendment has previously been used to guarantee some rights not specifically outlined in the Constitution, those rights must be “deeply rooted in this Nation’s history and tradition” and “implicit in the concept of ordered liberty.” Basically, it has to have historical precedent.
However, historical precedent has frequently discriminated against marginalized communities. While it’s important to recognize our history and utilize it to inform our current policy decisions, the history of the United States is rooted in racism, sexism, and homophobia that we have allowed to thrive within our legal system. Overturning Roe v. Wade is a violent decision that discriminates against women, people of color, trans people, and other members of the queer community. It targets the people who are in need of the most help, those who are’t afforded the same liberties as the cisgender white men that formed the “nation’s history and traditions.”
This decision goes beyond attacking abortion rights — it’s an attack on the foundation that protects marginalized populations from state-sanctioned violence. Overturning Roe v. Wade puts a wide variety of rights in danger, including same-sex marriage, interracial marriage, access to gender-affirming and reproductive care, and more.
When it feels like your legal protections are crumbling around you and there’s nothing left to do, what can you do? We won’t sit here and tell you to vote. Everyone said voting blue in 2020 would fix things, and look where we are.
Right now, support and be a part of your community. During times like this, it’s necessary to lean on each other and seek and provide support.
Don’t go to Walgreens and buy as many morning after pills as possible unless you plan on using it or distributing it within your community. Recognize that you’re not alone in your fears and that other people also need support.
If you care to and are able, donate to local abortion funds, like he New Orleans Abortion Fund or the Goldstein Fund. Remember that abortion isn’t illegal in Louisiana yet, so don’t give up hope. Support your community and local healthcare providers while you still can.