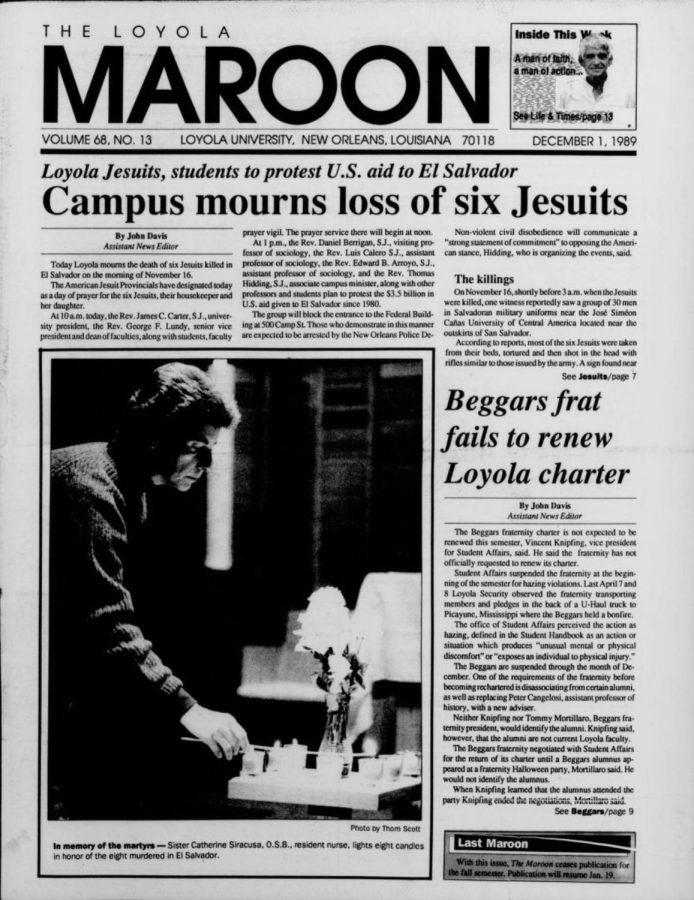 In late February, prosecutors charged the former president of El Salvador, Alfredo Cristiani, for the murder of eight people, including six Jesuit priests, on Nov. 16, 1989 during the Salvadorian Civil War.
The Peace Quad at Loyola University was implemented as a memorial to this tragedy, and the news of Cristiani’s arrest has faculty members on campus remembering the meaning of the university space.
The. Rev. Justin Daffron, S.J., interim university president, spoke to the significance of the Jesuits’ work and their immense amount of bravery in the face of countless threats on their lives. He said Jesuits dedicated themselves to providing food and shelter to the most vulnerable in society in the midst of the civil war.
They were also professors at the University of Central America in El Salvador and sought to spread the Gospel to those in need. They did all of this amidst countless death threats and numerous human rights violations levied at the people at the hands of the government, he said.
It was this extreme dedication and bravery that angered the Salvadoran government and cost them their lives, he said.
The public in El Salvador had difficulty persuading the government to prosecute those responsible after the passage of an amnesty law in 1993. This law pardoned two previously convicted military officials involved in the murders only three years into a 30-year sentence. This law would stay in place for more than two decades, until its eventual overturning in 2016.
Susan Weishar of the Jesuit Social Research Institute at Loyola also spoke to the great amount of bravery that was required for the Jesuits to continue their work. On top of death threats, they were also called communists, she said, an accusation that has carried significant weight, especially in the United States, since the days of the Cold War. Weisher also discussed the United States’ involvement in the massacres – something the United States has never taken accountability for. The battalion responsible for the murders, the Atlacatl Battalio, an elite unit of the Salvadoran army, was trained by the U.S. Army at the School of the Americas. This unit had committed many other atrocities during the war, such as the massacre at El Mozote that took the lives of 1200 people eight years prior to the death of the Jesuits.
Alvaro Alcazar, who teaches a class on the subject at Loyola and was an integral part in establishing the Peace Quad as a memorial, said the faith of Jesuits is silent and blind to domination. He considered the current status of Jesuits in Latin America.
“The colonial power that is still very much in place in Latin America has created a ‘faith’ that is blind to or silent about injustice,” he said.
It was this faith that inspired the Jesuits’ activism, but it cost them their lives, he said.