Community wants Loyola to do more for accessibility 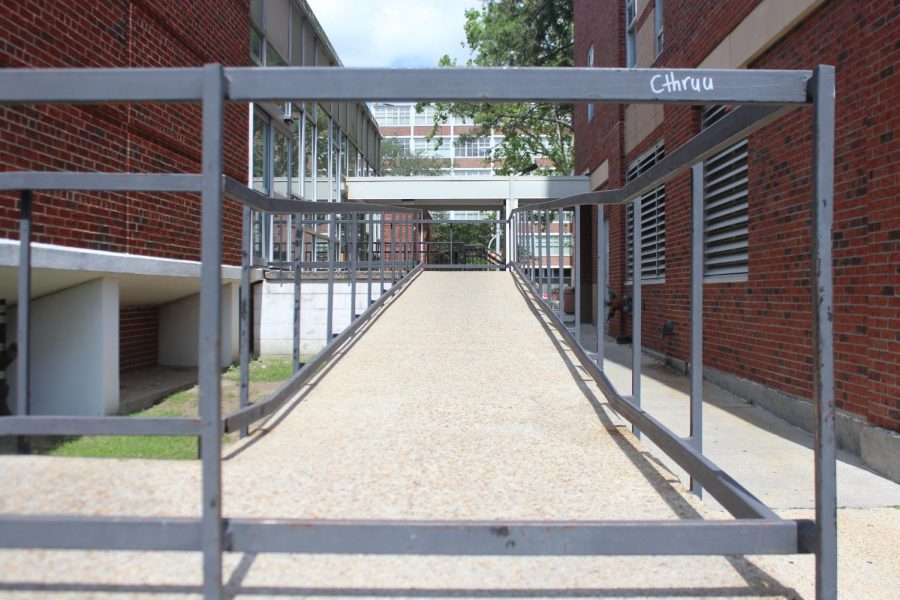 A particularly steep ramp leads into the Dana Center. Students cite examples like this that are technically legal but not the best accessibility options.

“Going above and beyond that would make the campus really inclusive,” the advisor coach and adjunct professor said.

Crago is not alone in his thinking. Other members of the Loyola community with disabilities as well as SGA’s Ad Hoc Accessibility and Disability Committee think Loyola could be doing more to improve on-campus accessibility, especially in buildings without elevators like Broadway campus dorm, Greenville Hall, and the nursing building, Stallings Hall.

These buildings are considered historic and have been “grandfathered into current building codes” which exempts them from some ADA requirements, according to Associate Director of Public Affairs Patricia Murret.

Director of the Office for Accessible Education Andrea Rodriguez said she is not aware of any activities or classes that take place on the second floor of Stallings Hall. She said she has reached out to the university about further steps to provide access to the building.

“It is not advised to have offices or activities on a floor where an elevator is not available,” she said. “At any moment any person could become injured and would need to use an elevator.”

Musical theatre senior Vivian Bulleit has been in several productions throughout her time at Loyola and her father, who uses a wheelchair, has been unable to attend any of her performances until this semester. The Lower Depths Theater is inaccessible, except down a flight of stairs, making it impossible for someone who uses a wheelchair to navigate without assistance.

“That’s not the theatre department’s fault,” Bulleit said. “That’s the school’s fault for not putting in accessibility measures.”

Murret said the university has discussed adding a lift to Lower Depths Theater in the future.

To see Loyola’s recent production of “Head Over Heels,” Bulleit said her father had to take the elevator to the 2nd floor of Marquette and exit out “a little door” onto the balcony before navigating into Marquette Theater.

She said this problem persists in other places too, like her dorm building. Although Loyola’s dorms are ADA compliant, according to Director of Residential Life Chris Rice, Bulleit said even entering the dorm building is a “process.”

“There’s just not enough space for him to hang out (in my dorm),” she said.

Analene McCullough, who has a physical disability and is the chairwoman of SGA’s Ad Hoc Accessibility and Disability Committee, thinks elevators are another problem space on campus. She said that elevators are often down without any notice to the community and that this was a constant when she lived in Carrollton Hall as a sophomore.

“That was a day of having to go up and down seven flights of stairs which my body really could barely take then and definitely couldn’t take now,” she said.

Crago has similar complaints of Loyola’s campus, noting the difference in ease of access for those with disabilities when compared with those without.

“We can’t make assumptions that just because everybody else could do it, or most people can do it, everyone will,” he said.

Crago said parking is also an ongoing issue at Loyola.

Until recently due to legislation passed by SGA, the accessible parking spots in the West Road Garage would get blocked off during events, according to McCullough.

“The campus is not set up to accommodate the physically disabled and it has definitely been a fight leading to some very, very specific SGA legislation,” she said.

Now that accessible spaces aren’t being blocked off, Crago said he thinks there should be wider and more spaces available rather than just the federally mandated minimum.

“If somebody is in a motorized wheelchair instead of one like mine that folds up and goes in the back of my car, they’re going to find it hard to get in and out,” he said.

Senior Vice President for Equity and Inclusion Kedrick Perry reached out to the university last week in hopes of addressing some of these concerns. In his email, he asked members of the Loyola community to provide the office with information on any spaces on campus that are inaccessible.

Murret said there are plans to add an elevator to Greenville Hall during upcoming Broadway campus redevelopment, but that there are no “firm” plans in place to add one to Stallings Hall.

“Our aim with any renovation is to make meaningful, enduring changes and to ensure the student experience at Loyola is an excellent one for all of our students,” she said.

McCullough wants to see changes like these made but doesn’t think Loyola’s accessibility problems are malicious.

“I do think that there’s just a level of ignorance that leads to these problems,” she said. “I think that is why awareness to my committee is what’s so important. Because once people realize things, you can’t stop noticing them.”