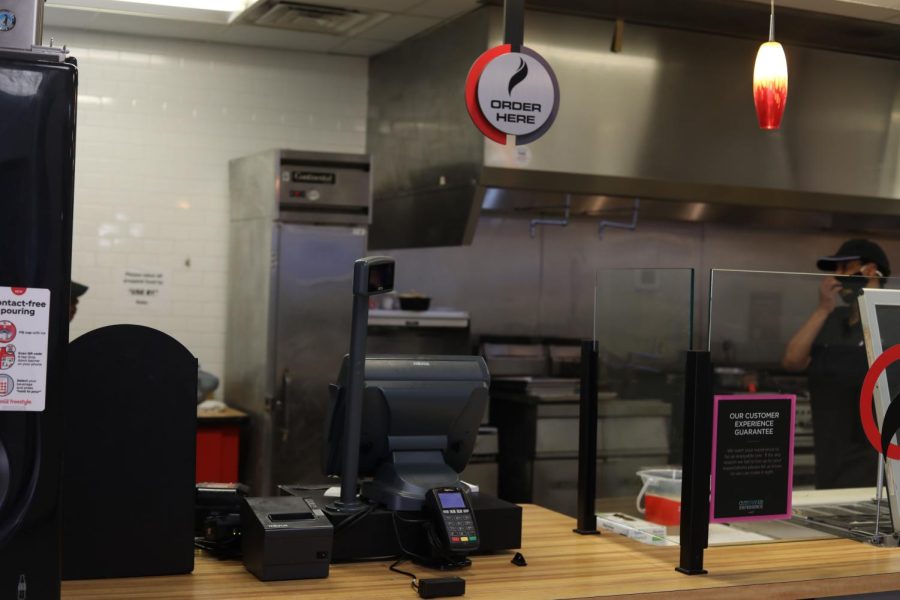 The Original Burger Company register sits in front of empty grills in the Danna Canter on May 4, 2022. The OBC register failed to take wolfbucks during transactions for the current and past semesters, leaving students with the bill less than two weeks before graduation.

With less than 12 days before graduation, Economics Senior Anthony Cesario got an email saying they owed the university more than $80 for purchases at the Original Burger Company they thought they had already paid for.
The email they and many other students received from Chris Rice, director of student affairs, said that a register at the Original Burger Company did not actually deduct Wolf Bucks when used to make purchases at the time the transaction took place. Rice said in the email that the charges would be applied to everyone’s student accounts after May 6. The charges come from both the fall of 2021 and the spring of 2022, according to the email. While students were notified of the issue May 3, Rice told The Maroon the issue was discovered sometime during late March. Amanda Santos de Oliveira is a junior criminal justice major, who was charged more than $45. She was confused as to why it took so long for the issue to be discovered and brought to the attention of the students.
Cesario said they felt the actions of the university were misleading.
“I use that balance for my own purchasing decisions to see, ‘ok, how much do I have, how long am I gonna stretch it out,” they said. “I rely on that to be accurate, and so, as it turns out, it wasn’t accurate. I had spent more than I otherwise would have paid.”
Julia Porari, a junior English and mass communication double major, said they were charged $23 from the university. When she first read the email, she thought it was a scam at first. For only one trip to the Original Burger Company where she used Wolf Bucks, the amount she was charged feels large for an order of a burger and fries.
Rice said students can email [email protected] to get a copy of the charges from the register, as well as a copy of their Wolf Bucks charges from this spring semester. Santos de Oliveira said she just worries about what prevents this from happening again.
“Do I even want to spend my money with Wolf Bucks again?” she said.
As a senior, Cesario was concerned how these charges will affect graduation. Rice confirmed there will be no effect on this year’s graduates getting their diplomas.
Even still, Cesario said they believe the responsibility for paying the charges should fall on the university.
“From a university standpoint, from a Catholic standpoint, trying to put this mistake on the students financially rather than the school eating it on its own, footing that bill for however much that amount may be, again it brings up a whole bunch of ethical issues on where their values are really at,” Cesario said.
Cesario said if the university doesn’t rectify the situation properly, they may need to start thinking of legal actions.
“They claim it wasn’t intentional,” they said. “I don’t really care whether or not it was intentional. It still seems like they had information that was unreliable, misled myself and probably others into making financial decisions they otherwise would not have made, and now they’re trying to go after us for that.”