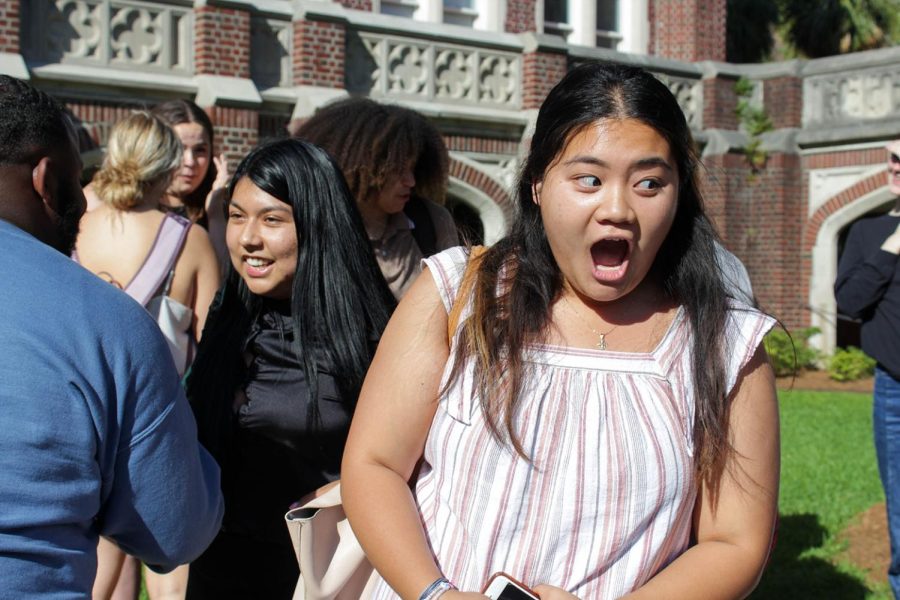 Student Government Association Commissioner of Elections Emma Trunkle announced May 4 at 5 p.m. that Stephanie Oblena and Viviana Alvarez will be president and vice president, respectively for Loyola’s 2022-2023 school year.
Despite a delayed election season and tensions within SGA, three tickets ran for office, with the Oblena/Alvarez ticket winning the race. They ran on a three-tiered platform of student quality of life, accountability, and relations between student government and the student body. Oblena said that the announcement was overwhelming but she’s beyond happy.
“I’m still processing a lot of emotions, like excitement,” Oblena said in the aftermath of the win. “This is all so overwhelming, and there’s just a rush of adrenaline.”
Alvarez also shared her excitement and said she’s ready to start working. She said she owes a lot to her mom, who helped Oblena and her make campaign materials.
“I’m ecstatic,” Alvarez said. “I’m really happy, but as you can see, we have our work cut out for us.”
The duo is prepared to hit the ground running and is already planning for next semester, they said. Oblena said that their first priority is communicating with the outgoing SGA cabinet to see what issues they ran into and discuss possible solutions.
“We just want to see where they’re at,” Oblena said. “We can see if they had any issues and work off of those so we don’t have to start from scratch, and we definitely don’t need to.”
The Oblena/Alvarez ticket took home about 45% of the vote, followed by Robert Morrison III and Destiny Sanders at 37% and Adele Colson and Joseph Pitre at 19%, according to Trunkle.
This year’s voter turnout was higher than last, with 377 students, or around 8.5% of students voting. Last year, voter turnout was around 7%.
Oblena thanked the student body and said that she wants to serve every student, even if they didn’t vote for her.
“Thank you to everyone that supported us and helped us get to this point,” Oblena said. “We’re here to work for you and absolutely want to hear your needs.”
Alvarez echoed her sentiment, thanking students for their support and promising to serve them.
“We’re going to make Loyola better than what it is,” Alvarez said. “You deserve better. Everyone deserves better. No matter your opinions, no matter your walk of life, no matter where you’re from, you deserve better.”
Trunkle also announced the winning senators for Loyola’s colleges. Because there were more empty seats than candidates running, every person who ran won their seat. Blake Makofsky and Gillian Ladd took home senator-at-large seats. For the College of Arts & Sciences, Akilah Toney, Mia Vitello, Amari Glover, Nia Woodside, Kalena Myers, Rowan Sawyer, and Kaley Decker were elected. Kourtni Harding and Leslie Williams will represent the College of Nursing.
Students also voted on the Green Fund, a student managed and funded allocation towards sustainability efforts on campus. The Green Fund passed, with around 72% of students voting yes.