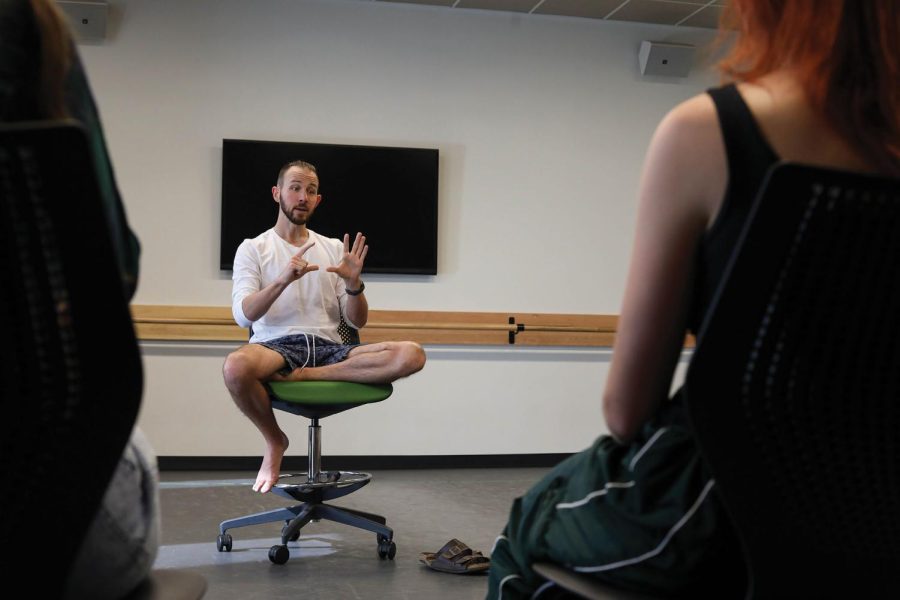 Hardy Weaver rejects the idea of the suffering artist. This adjunct professor and director of the recent Loyola production “Head Over Heels” said lack of boundaries and poor treatment are normalized early in theatre arts training.

Weaver is trying to change that established narrative by bringing Vedic meditation to Loyola’s Department of Theatre Arts and Dance. This involves the silent repetition of a mantra given to you by an instructor for two 20-minute sessions daily.

“There is a more healthy, sustainable way to create, and that stress and suffering does not have to be the impetus for creating art and making art,” he said.

Before finding Vedic meditation in his mid-20s, Weaver said he was living a “perfect” life on paper with a career performing in national tours. However, he said he suffered from anxiety, panic attacks, insomnia, and even stress-induced psoriasis.

After discovering Vedic meditation, Weaver said his life improved drastically. Eventually, he decided to leave Broadway to study with Vedic masters in the Himalayas. Now, he hopes to bring his meditation knowledge to students around the country.

Musical theatre senior Haley Sliker said she tried other methods of calming her anxieties and nothing clicked – until she joined Weaver’s meditation class the first week of rehearsals for “Head Over Heels.” After a few meetings, she recognized a change.

Weaver sees this style of meditation as an easy thing to integrate into anyone’s routine.

“I think of it like brushing your teeth, but for your nervous system,” he said.

To get rid of the stress your body accumulates, Weaver said Vedic meditation gives you the opportunity to put yourself in a state of deep rest.

“The body knows how to heal, knows how to repair, restore, replenish,” he said. “We’re just not giving it enough time and access to that state.”

Weaver’s meditation technique helped reduce the stress of the rehearsal process for some cast members of “Head Over Heels.”

Musical theatre junior Illeana Yanez-Pastor said that she can get overwhelmed with thoughts of school and the ins and outs of the rehearsal process while working on a show. However, with “Head Over Heels,” she said the mediation calmed her.

“The meditation, like having that mindset of giving your body time during the day to actually like rest, actually did really help,” she said.

Sliker said the meditation and Weaver’s open mindedness were helpful during rehearsals. She said she never felt like she had to leave her emotions at the door or force herself to feel one way or another to rehearse.

“I feel like I don’t have to sacrifice myself to be a good artist,” she said.

Weaver said integrating Vedic meditation into the rehearsal process for “Head Over Heels” gave him the opportunity to combine his two passions. After sharing photos of the “Head Over Heels” meditation group, he said he’s had other universities reach out about sharing his knowledge.

“Loyola has really allowed me to create a blueprint for how to go about, you know, infusing this into a curriculum, into a rehearsal process,” he said.

Both Sliker and Yanez-Pastor intend to continue with the practice beyond “Head Over Heels” and into their creative futures.

“I hope Hardy continues teaching it and brings it to other places because I just think it’s amazing,” Sliker said. “I wish somebody would have taught me that sooner.”

Yanez-Pastor said she’s going to try her best to fit the meditation into her daily life.

“It’s going to be really useful for me in the future,” she said.