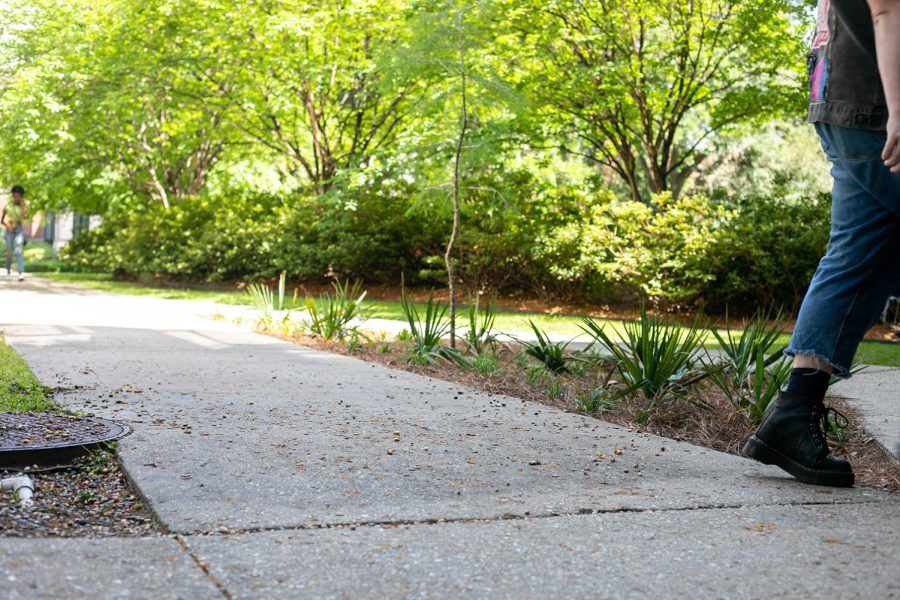 A student walks past a newly built bioswale outside the Danna Center on May 3, 2022. A bioswale was built by the university and SGA sustainability committees to address flooding.

In order to address flooding caused by frequent rainfall, Loyola University New Orleans is installing bioswale structures across campus. The first bioswale structure is currently under construction and is located near the Danna Center.

These systems also benefit Loyola’s natural surroundings in addition to flood prevention, according to Robert Thomas, the university’s current director of the Center for Environmental Communications.

Bioswales are drainage systems that offer relief from flooding by preventing excess water runoff, Thomas said. They are both more efficient and gentle on the environment because they allow soil to stay properly moisturized, he said.

The introduction of bioswales marks a shift in the way flooding is addressed, according to Thomas. Historically, emphasis has been placed on removing water rather than redistributing it, Thomas said. Dry soil negatively affects ecosystems in New Orleans because it is unnatural, Thomas said.

Additionally, the introduction of bioswale projects on campus presents new opportunities for the Loyola community to learn about and interact with the school’s natural surroundings.

Stephanie Oblena, a sophomore environmental studies major who serves on Loyola’s Student Government Association as a senator-at-large for the College of Arts & Sciences and as chairwoman for the school’s sustainability committee, said that bioswales are just the beginning of environmental infrastructure at Loyola, as there are many ways in which the campus could improve its sustainability. However, she is also concerned about funding the new infrastructure.

Phase one of Loyola’s bioswale project will cost $30,000, Oblena said. Funding came from the university president’s office, as well as Loyola’s Student Government Association, she said.

“We’re trying to start a Green Fund so we can better address these issues,” Oblena said. “There’s a lot of room for green infrastructure on campus.”

Oblena said that educating students is another driving force behind this program’s creation.

“Water is the center of life,” Oblena said, “especially in New Orleans.”

She believes that it is important for the Loyola community to understand the natural environment they live in so that they can better work to protect it.

Thomas agreed with this sentiment.

“We are very excited,” he said. “I think it is a great process for the students to pitch in and help design and go through conversations about this.”