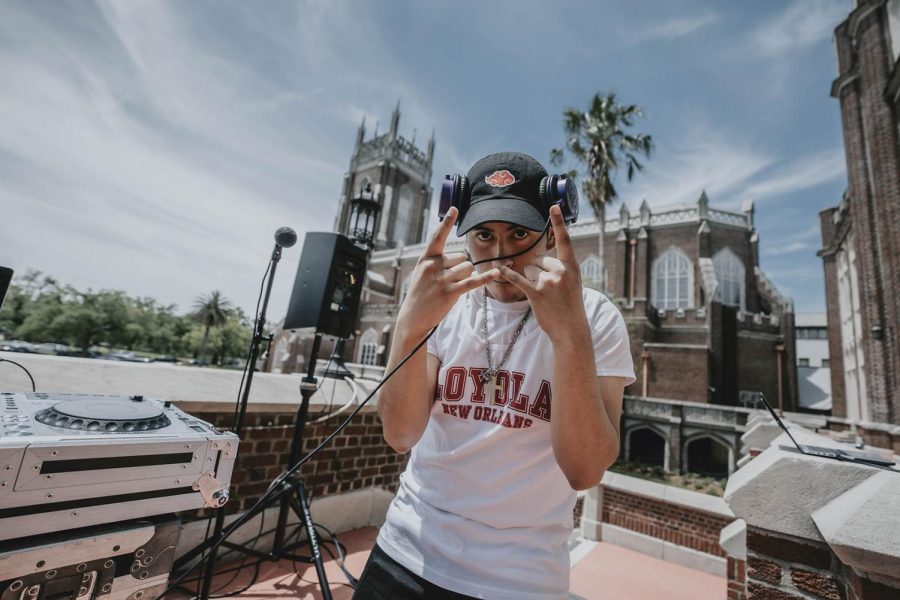 Jesus Tiscareno stands in front of Marquette Hall at Loyola while DJing at Senior Fest on April 19, 2022. Tiscareno is graduating from the Urban and Electronic Music Program this May. Courtesy of Angelo Joseph

The first time Jesus “DJ Squishy” Tiscareño set foot in a music studio at Loyola he cried.
It was when he first visited Loyola his junior year of high school and met Jacob DeRusha, a university minister, who he told about his interest in music.
“That’s when he said, ‘you wanna go see the studios?’ I was like ‘yeah,’” Tiscareño said.
And he got there, it was emotional.
“My heart started racing, and I knew this is where I’m meant to be,” he said.
Tiscareño is set to be graduating this spring from the Urban and Electronic Music program. He, along with Kyron Adams-Brown, will be the first graduates from this first-of-its-kind program, according to Kate Duncan, associate director for music and theater professions and the director of hip-hop and R&B music programs. The program started in 2019, yet will go by a different name after this year. Tiscareño and Adams-Brown, along with all other students currently in the major will have Urban and Electronic Music on their diplomas. Going forward, students entering the program will have hip-hop and R&B production as the official title for their major.
“We realized that we had far more students who wanted to focus in a more boutique way of hip-hop and R&B production than the broader term of electronic,” Duncan said. They decided to change the title to reflect what students wanted to focus on for the degree. In addition, she said “recent trends in the music industry have steered away from the term urban. It was a connotation we weren’t going for.”
For Tiscareño, as an artist that has dabbled in most genres but specialized in electronic dance music, he said he doesn’t like such a strict classification as someone specializing in electronic music. Despite not being a fan of the new title, he was glad to have attended Loyola and benefited from opening up his repertoire in the program.
The degree has seen a lot of changes since it was announced back in 2018, Duncan said. That includes creating a more robust technology sequence and increased one-on-one training in the studio with professors.
She said what makes the program so special is that it is one of very few degrees in the country to focus on the production, creation, and artistry of hip-hop and R&B music.
“There are many degrees in the country that focus on more of like a cultural study of, or like a dabbling of, ‘I’m a classical musician but I can take one or two classes in hip-hop production,’” Duncan said. “We are one of the only degrees in the country that are centric to this.”
Much like the urban and electronic music program, Tiscareño has evolved through his time at Loyola, having first been interested in trap music, before switching to focus on another sub genre of EDM known for its more pop vibe, house music. Trap music generally has faster beats per minute, as well as more drops and intensity compared to house music, he said. One thing that hasn’t changed since coming to the school was his stage name, DJ Squishy.
The namesake wasn’t his idea. A friend in high school had affectionately given him the nickname Squishy, he said.
“It wasn’t until the soccer team met up, and then she was like ‘squishy come over here, come give me a hug.’ I went over and gave her a hug, and I looked back around and the whole soccer team was scheming,” he said.
After that, it followed him.
“I hated the name my whole freshman and sophomore year, and half of my junior year, but then I was like, ‘You know what, I’m Squishy. It’s a better name than my old DJ name,’” Tiscareño said.
His previous name was Little Mexican Friend, an alias he still uses as his gamer tag.
In his future he hopes to see himself being a headliner at Red Rocks Amphitheater in his home state of Colorado, but for now, he hopes to move away from DJing at parties and quinceañeras to do more gigs at venues as an artist.
Most recently, Tiscareño was the DJ for Senior Fest at Loyola on April 19th. He also released a song on April 22, “Be With You,” that is available on all streaming platforms in a collaboration with Piper Stringz.
He said some advice he would give to students coming to study at Loyola in his degree program is to, “be open minded, open your ears, and just vibe out.”
Tiscareño said that after graduation he plans to do just that by going back home to Denver and getting into the music scene there, which he said is friendly to EDM. The market is easier to break into than New Orleans, Tiscareño said.
“I think every genre works (in New Orleans),” he said. “It’s just from my experience of being here that everyone is trying to play and everyone is trying to make it here, so I think I would have better chances of making it there since I would be heard even more.”