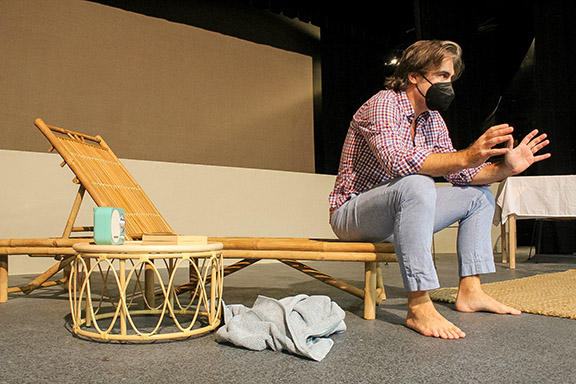 Executive Director of Crescent City Stage Michael A. Newcomer rehearses for the debut show "Pantomime" on Aug. 30, 2022. The theater company began their residency at Marquette Theater in the fall.

Crescent City Stage is the first professional regional theater to open in New Orleans, and their debut is happening right on Loyola’s campus at Marquette Theater.
The new theater company and Loyola’s theater department are partnering together to put on Crescent City Stage’s first show, “Pantomime”, a two-man production, starring Michael A. Newcomer, executive director of Crescent City Stage, and Michael C. Forest, an award winning New Orleans actor, showing Sept. 8 through Sept. 25.
Through Loyola’s partnership with Crescent City Stage, the university’s theatre students will have new educational opportunities to network with theater professionals and explore the professional world of their field.
“In theater, partnerships are a key piece to our ecosystem, and I’m very proud that our department can help companies around New Orleans,” said Salvatore Mannino, Loyola’s artistic director and extraordinary professor of theatre arts.
Despite the major setbacks and slowed-down conversations about hosting the show due to the pandemic, Newcomer and Mannino have worked closely together for more than two years to bring their collaboration and ideas to fruition.
“CCS has a home to present its first season, and we all plan for that to continue. They have been great to collaborate with, and we’re excited about the future of the relationship,” Mannino said.
The itinerant group selected Marquette Theater in its hunt for options to partner with a more “traditional” theater venue that had the capability to sell a sizable number of tickets, according to Newcomer.
Although no current students are participating in Crescent City Stage’s debut performance, Mannino has hopes for students to participate in future productions and have the opportunity to take master classes with the new company.
Founded on the principle that “without the artist, there is no art,” the Crescent City Stage has since worked to build a diverse and accepting community in which each participant reflects unique perspectives, according to the organization’s website.
“Crescent City Stage was born out of the desire to create an organization that has a focus on diversity and sustaining wages for arts workers, and aims to create a new business structure that gives hope for the future of theatre arts workers right here in New Orleans,” Newcomer said.
The organization is looking forward to expanding, and via cross-collaboration and engagement with Loyola, theater students will have the chance to work post-graduation with the group, whose primary goal is to provide sustainable pay for those who work in the arts, according to Newcomer.
The upcoming show “Pantomime” focuses on issues concerning racial identity, post-colonialism and politics, which Newcomer and Forest both agree is still highly relevant to modern society.
“I’m very honored to be a part of the first production of Crescent City Stage, and (to be) able to tell such a timeless story that is still culturally relevant even today,” Forest said.
“Pantomime” was written more than four decades ago by Derek Walcott, a Nobel-prize-winning West Indian poet. The play explores the relationship between a White hotel owner and a Black servant. It shows their attempts to entertain hotel guests through a satirical take on the Robinson Crusoe story.
“It’s couched in a humorous, funny, absurd way, which mirrors the society in which we’re currently living, where we’re having this racial reckoning,” Newcomer said.
Although the topic matter is challenging in that it discusses the nation’s prejudices, Newcomer said he hopes that this show will inspire the community to engage in “healthy, useful, and healing discussions” about the racial injustice that exists in the U.S.
“Even though this play was written some 50 years ago, it is now more than ever a prominent way for theater to do what theater does best, which is raise a mirror up to the society and community in which it’s engaging,” Newcomer said.
Tickets for “Pantomime” are on sale now through Crescent City Stage’s website.