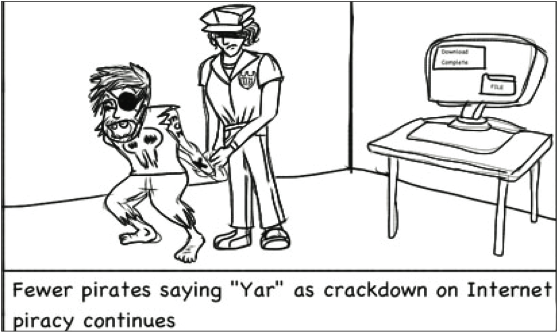 If you have ever downloaded a song or movie from the Internet through BitTorrent (or uTorrent), then this opinion is for you.

In the upcoming weeks, the Recording Industry Association of America (RIAA) and Motion Picture Association of America (MPAA) in association with our Internet service providers (ISPs), will implement an anti-piracy “six-strikes” warning system to identify users that illegally download music or movies through peer-to-peer (P2P) software, including BitTorrent. This is an attempt of copyright holders to dam the flood of unauthorized P2P file sharing that continues to permeate our digital world. Will this put a stop to the way we share and distribute movies and music? In my opinion, it will not.

How does this work? Third party monitor companies (known as media defenders) hired by the RIAA and MPAA monitor commonly visited torrent sites (like The Pirate Bay) to hunt down and report illegal downloaders. These media defenders connect to so called ‘trackers’ embedded in all torrent files. Trackers identify ‘seeds’ (computers that have fully downloaded a file and are sharing it) and ‘leeches’ (computers that are still downloading a file) and communicate with them via the computer’s IP address (what connects you to the Internet) to determine which computers need, or already have, a given file. Once a computer is tracked as a seed or leech, the media defenders report the computer’s IP address to its respective ISP. Finally, the ISP sends a notice to the suspected infringers and voila – strike one.

Among the Internet Service Providers involved are Comcast, Time Warner, Verizon, Cablevision, and AT&T. Cox, however, is not one of them.

What do strikes do? Under the “six-strikes” system, a suspected media pirate will receive a notice from their ISP that their IP address was used for illegal downloading. The notices following will contain alerts of the same nature along with direct links to educational pages on copyright infringement and laws. After the six notices, mitigation measures in the form of decreased Internet speed will follow. Although notices and temporary Internet lag do not seem too scary, careless and persistent media buccaneers stand the chance to be sued for infringement by the copyright owner.

What does this mean? According to the Copyright Information Center (CIC), the goal of the strike scheme is to warn users that their downloading is unacceptable and to educate them on the importance of honoring copyright protection. This will likely have the most effect on young children new to the Internet and their parents, not so much the big-league freeloaders like us.

Still, there exist myriad ways for peers to continue to pirate (or ninja) music. Uploading albums to Dropbox and sharing them with friends has become a new custom to many. Additionally, hard-drive swapping and CD burns do not seem to be dying practices. Though I do not condone these methods, the point is that the copyright owners, RIAA, MPAA and the new strike system face an endless battle ahead given the widespread acceptance of free music and movie acquisition via torrent. Recently, a Music Metric study reported that 405 million music downloads took place during the first six months of 2012 on BitTorrent. As BitTorrent’s website questionably boasts, over 121 million of those downloads were legal, leaving a paltry 284 million downloads unaccounted for.

Personally, I believe in both sides of the broken record. Musicians and film makers deserve to be compensated for their creative expressions that we the consumers enjoy on a daily basis. But with the advent of torrents, free watch sites like Hulu and other listening mediums such as Grooveshark and Spotify – where you can listen to almost anything at any time for free – there is little to no incentive to spend what money we don’t have on music and movies when it is seemingly free.

Unless record labels are ready to resort back to selling only vinyl LPs or the Internet suddenly disappears, I do not foresee the ongoing torrent ninja-ing of music and movies slowing down soon. But if you’re not careful, and you find yourself getting strike notices in the mail – your Internet could be the thing slowing down.

In My Opinion is a weekly column open to any Loyola student. Those interested in contributing can contact [email protected]