Readers think that print news is moving towards online

As The Times-Picayune cuts down to three days a week, students look for other news outlets 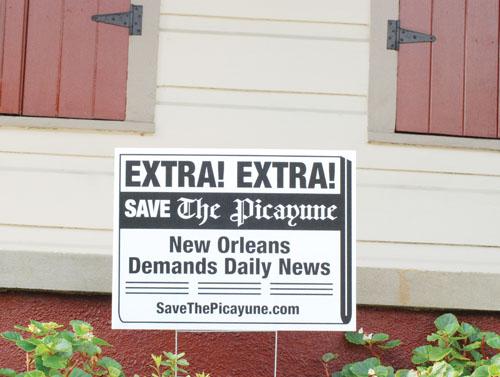 A "Save The Picayune" poster sits out front on an uptown lawn. Since The Times-Picayune cut down to three days a week, many citizens have joined this movement to try and restore the paper to full place.

In an age of smart phones, tablets and social media, more college students are pushing away from the traditional print copy in favor of free, more convenient online sources.

Two-thirds of editors surveyed at the 2008 World Editors Forum cited the greatest threat to the future of newspapers is the steady decline of young readership. As of May 2012, that threat is valid. NPR Audience Insight and Research reported that only 22 percent of 18-to 24-year-olds read the newspaper every other day.

“I understand people’s nostalgia for paper, I really do,” CEO and executive director of the Investigative News Network Kevin Davis said, at the Loyola-hosted Public Forum on Journalism on Aug. 8. “I still get the paper and I hope my kids will remember getting the paper, but they’re not going to buy the paper probably in the future.”

Students agree with this thought.

“I think it’s sad that people don’t read the newspaper, but I don’t either,” said Jordan Riewer, environmental studies junior. “It’s hard to physically read in comparison to clicking around on the Internet. I feel like a grandpa when I do.”

The Pew Research Center’s Project For Excellence In Journalism the State of News Media 2012 says that nearly a quarter of adults get news from multiple online sources, with 46 percent of U.S. adults seeking daily news on four to six different platforms. Much of that news is sought through an organization’s website or app.

“I haven’t bought a newspaper in about six months,” said Zachary Lund, music industry senior. “I usually look for news on CNN, Huffington Post, NPR, and MSNBC on my phone or laptop,” Lund said.

Many prefer online news because of free content, quicker results, better graphics and increased mobility. “I would love tohave a subscription to a newspaper like the New York Times, but I don’t have the money or the time and place to read it,” Lund said.

“We have to match the content to the consumer in the way the consumer is used to getting information,” said Poynter senior faculty, Kelly McBride. at the Forum. That content for the Generation X consumer is predominantly digital, with nearly 100 percent of college students using the Internet.

According to the Pew Internet and American Life Project, 95 percent of undergraduates have at home access to broadband Internet – a rate 29 percent higher than the national adult average.

Although more and more students receive news digitally, that does not mean that all are allergic to print – they are just opposed to paying for it. Free college newspapers continue to have high pick up rates, such as The Maroon with a monthly rate of roughly 80 percent.

Some students who chose to subscribe to daily publications say it helps bring the real world into the classroom. “I subscribe to the Wall Street Journal,” said senior accounting major, Claire Witkewicz. “I’ve always enjoyed reading the paper, so when a professor suggested I subscribe, I did. I like knowing what’s going on in the world and being able to relate it to what’s going on in class.”

Lauren Irwin can be reached at [email protected]