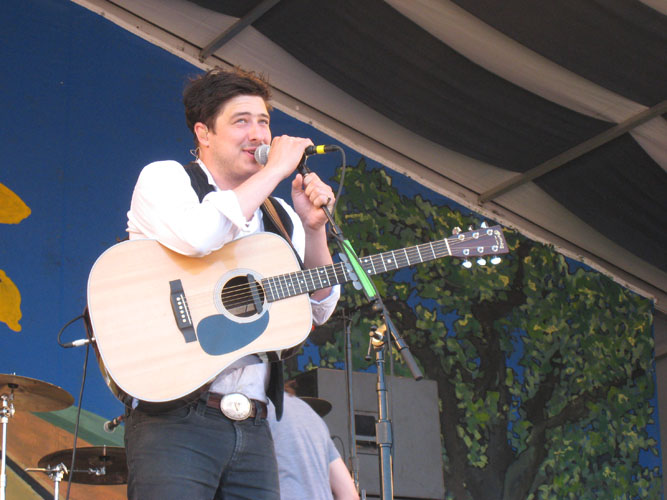 Marcus Mumford of the band Mumford and Sons performs at Jazz Fest on Friday, April 29. Jazz Fest will continue this weekend at the Fair Grounds Race Course on Gentilly Boulevard.

The New Orleans Jazz and Heritage Festival began the first weekend of its 41st year with some of the mildest and breezy weather the city has seen all spring. The mood of the revelers ran extremely high as they took in a wide range of musical selections in a variety of genres.

The Highlights of the first day were two British offerings: the two time Rock and Roll Hall of Famer blues-rock guitarist Jeff Beck and the popular and impressive folk-rock band Mumford and Sons. While the crowd demographics for the two choices couldn’t be more varied, they both drew an extraordinary number of fans. Beck blew his audience away with awesome guitar pickings, and Mumford and Sons’ audience went crazu during their set, especially when they played their biggest hit. “Little Lion Man.”

On the other end of the spectrum, hip-hop artist (and former Fugee) Wyclef Jean stuck to his usual performance style: letting his recordings run while he sings/raps over them. Though he does put on a convivial show, more should be expected from such a talented artist.

Even without lead guitarist Richie Sambora (in rehab…again), Jon Bon Jovi and company proved that no one rocks and arena quite like them. They played most of their greatest hits and had some fun tricks up their sleeves, like transitioning into Roy Orbison’s “Pretty Woman” during “Bad Medicine” and closing with a crazy fist-pumping rendition of “Living on a Prayer.” Bon Jovi also wore a Saints jersey, which obviously made the crowd go wild.

The other great act of the day was Jason Mraz, who also drew an enormous crowd. While his style conveys a mellower attitude, his fans loved his performance. He gave a rousing rendition of his biggest hit, “I’m Yours.”

Unfortunately, the biggest shows of the day all took place right at the end, and they included John Mellencamp, John Legend and the Roots, Kenny G, Ario Guthrie, and The Decemberists, nut the most interesting set belonged to the blues/gospel-infused 71-year-old Tom Jones. Jones began with songs from his latest album, ripped into John Lee Hooker’s “Burning Hell” and blew the pants off the audience. he kept the crowd pumped by interspersing his hits and telling tales of Elvis and Jerry Lee Lewis.

Ari Silber is a Loyola MBA student. Before graduate school, he worked for nine years in the Los Angeles film industry, focusing on marketing, publicity, and distribution. He can be reached at [email protected]