Senior sprinter started as walk on 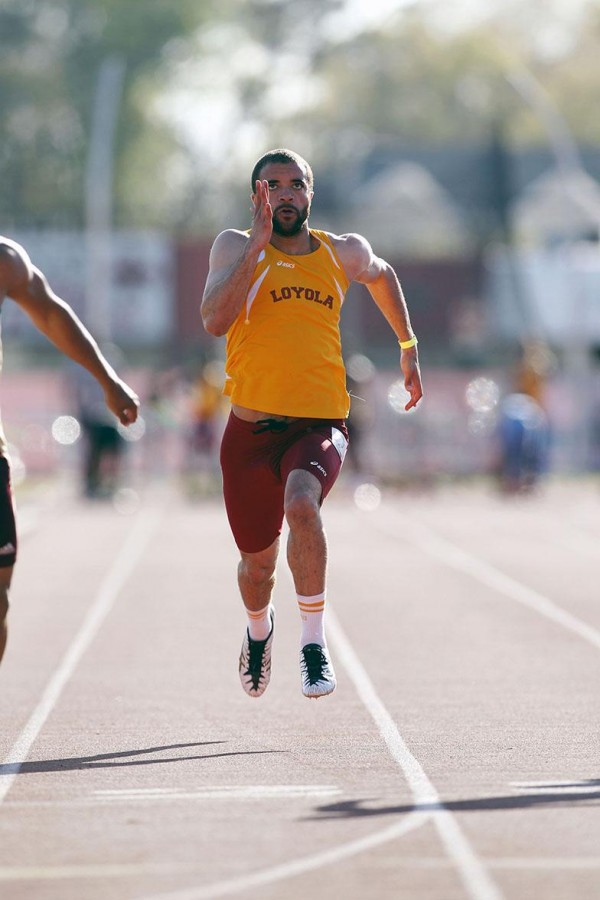 Managment senior Claude Nelson will finally put down his spikes and spandex as he looks to wear a cap and gown in the upcoming week. Nelson, known as Mookie, is one of Loyola’s strongest and most valued sprinters and helped his team break over 20 records in just this one season.

Unfortunately, it is time for Nelson to step off the track field, but only physically.

Nelson came to Loyola from Boston to play for the baseball team. When those tryouts didn’t go according to plan, he thought he would try out for the track team “on a whim.”

According to both him and his coach, Andy Canegitta, Nelson could barely run 400m when he first tried out.

Now, after three years of practice and dedication, he runs the 100m, 200m, 4×4 and 4×1, but claims his strongest is the 200m. He has broken his Loyola record, twice. He was even named SSAC athlete of the week last week. But he admits he would be nowhere without the support of his team.

“I can see how far I’ve come, but I wouldn’t have made it anywhere without my team. Whenever someone is going through the same type of thing, only they know what you’re going through. You can’t help but build strong relationships,” Nelson said.

Looking toward the future, Nelson hopes to keep up his athleticism, maybe even run a marathon just to “see what it’s like.” He is looking to move into a career in childcare development and hopefully at Life’s Good non-profit sector, working with underprivileged kids teaching them optimism and healthy lifestyles.

“I’m just like everyone else, trying to make everyone’s life a little more enjoyable. I’d like to consider myself an optimist, and if that can be the one thing I leave behind, that will mean more to me than any award,” Nelson said.

Sarah Szegeti can be reached at