A day with Google Glass

After wearing Google Glass for a day, a student recounts the pros and cons of the device 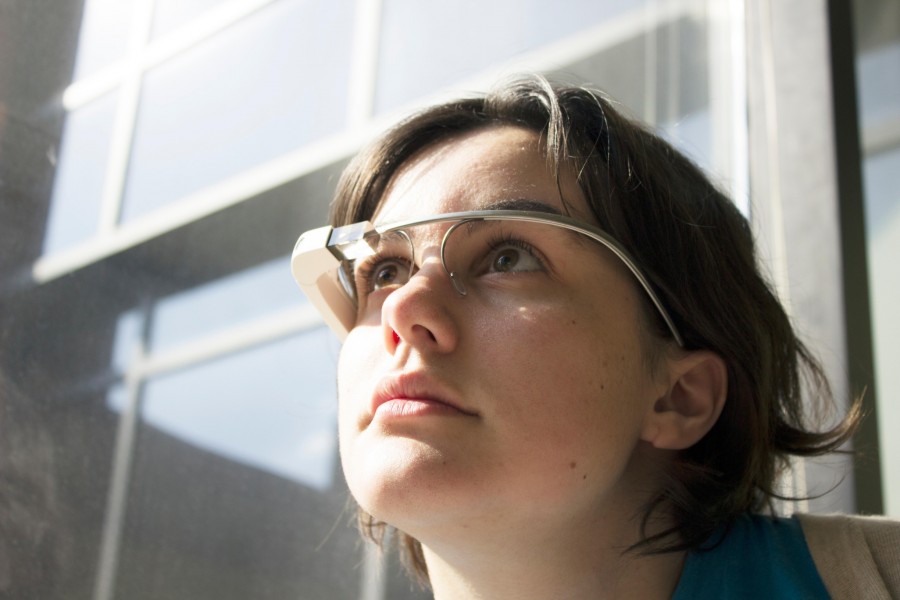 Emily Andras, English writing and mass communication senior and design assistant for The Maroon, wears the School of Mass Communication’s Google Glass. Glass, which is receiving mixed reactions from users and critics, is available in the mass communication office for student use.

I put the Google Glass on as part of my routine in the morning: brush my teeth, pack my bag, check my ID, grab a sweater, put a tiny, powerful supercomputer on my face.

“OK, Glass” hovered before my right eye; the clock just above it was telling me I was almost late for class.

I took a deep breath, and stepped out of the door into my first day as a cyborg.

START AT THE BEGINNING

The School of Mass Communication is taking part in Google’s Explorer program, in which people or organizations pay Google $1,500 – plus tax – to test the preliminary models of Google Glass.

“We’re pretty much beta testers,” Nelson said, when I met with him to discuss the Glass. “Which is cool, because you’re on the front lines of this new technology. It’s something that I’ve started to incorporate into my classes, having students learn how to use them and communicate with them.”

Patrick Gonzalez, mass communication sophomore, was in Nelson’s office during my interview, returning the Glass after a trial run.

His response to the technology and its practial uses was positive.

“It’s a really cool opportunity,” Gonzalez said. “It’s really teaching us to expand our communication horizons and to explore new parts of technology.”

I asked Nelson if I could try them on during our interview.

“Sure,” he told me, and Gonzalez handed them off to me. I put them on and was immediately overwhelmed.

“How do I do anything?” I asked Nelson. He laughed.

“Take them for a day,” Nelson said. “Is tomorrow good?”

HOW DOES IT WORK?

Google Glass was strange at first. I spent the better part of my first day with them watching tutorials on how to use Glass’s many features.

By the time I went to bed that night, I had mastered it enough to feel comfortable teaching others. My roommate and I were watching a movie on Netflix, and I searched an actor in the movie, pulled up his Wikipedia page and read off his personal history. My roommate didn’t even notice that I was using Glass instead of my phone.

It’s a deceptively simple voice- and touch-based system, a lot like an iPhone with Siri – if Siri were the sole method of operation. Tapping the side of the Glass brings it out of sleep mode – which it uses a lot to preserve its not-impressive battery life – pulling up the home screen, which shows the time and the phrase “OK, Glass.”

“OK, Glass” is the key activation phrase, which keeps you from accidentally searching things in conversation. It’s useful, except when other people know about this and take advantage of it; “OK, Glass, take a picture!” shouted one of my co-workers.

Glass obeyed, much to my frustration.

You can also use the side bar to slide through the options Glass gives you – making a Google search, taking a picture, getting directions, recording a video, sending a message, making a voice call and making a video call. Tapping lightly on a selected slide allows you to use the action. Some require a verbal command.

My Italian professor was interested in Glass. He seemed suspicious. “Are they recording all the time?” he asked.

I told him that they don’t have the battery for that, that they spent most of their time in sleep mode. After wearing them from 8 a.m. and using them as frequently as I pull my cell phone out of my bag, the battery was down to 24 percent by noon.

He didn’t look convinced, and neither did any of the other people who asked me the same question throughout the day. People were concerned about what I was seeing or who I was sharing it with, even people who weren’t doing anything but standing in line at CC’s.

Two people – a man and a woman – shied away from me when they saw the Glass. The man put his hands up to hide his face. I tried to talk to them, but they were having none of it. On the whole, though, the reaction was one of overwhelming curiosity.

“Before I saw them just now, I didn’t believe they were real,” Virginia Mitts, an English literature sophomore, said

At the condiment bar next to the CC’s kiosk, I ran into Gary Washington, a performing arts junior. He looked astonished when faced with Glass. He tried them on, shook his head and handed them back. “I just don’t get it,” he said.

Glass pulled up the coffee’s Wikipedia page and began to read it aloud to me. It was too quiet for Washington to hear, so I read the words on the screen.

“Coffee is a brewed beverage prepared from the roasted or baked seeds of several species of an Evergreen shrub of the genus Coffea,” I told him.

“This is beyond real, man,” Washington said. “The future is here.”

TELL ME THE FUTURE

Robert Kargon, Willis K. Shepard Professor of the History of Science at Johns Hopkins, specialized in science and social change and the history of science and technology in America. I called him to ask him about Glass and whether it had a future.

“I don’t know that much about Google Glass,” he told me in our interview, “but one way to measure the success of a technology is through the potential cultural impact, and I just don’t personally see it having that much of one.”

I asked him about the buzz surrounding the Glass, about the popular interest and whether that could give it the staying power he was talking about.

“Well, sure,” he said, “but you look at the convenience of it, the long-term impact – it’s like a cell phone you can wear, like Internet on your face. It’s something that has a rather limited use, and in the long term I don’t think that that’s a recipe for success.”

Robert Hernandez, an assistant professor of professorial practice at University of Southern California Annenberg, disagreed. I called him and he answered – with his Glass. We held our entire conversation through the headset.

“I mean, first off, I’m a technology nerd,” Hernandez said. “And I heard rumors about Google developing a wearable piece of technology, but I didn’t think that it would really happen. So when I heard about the Explorer program, I knew that it was something that I wanted to do. I won the chance to give Google my money to test Glass when I entered the #IfIHadGlass contest on Twitter, and it’s been an amazing experience.”

It was so amazing, in fact, that Hernandez decided to teach a class about Glass.

“I think it has great potential in the journalism field in the future. It’s not going to be replacing broadcast equipment anytime soon, no, and the video is shaky – even the slightest tilt in your head gives you a pretty weird effect,” he said. “But for certain kinds of stories, more emotional stories, it gives us a unique chance to really capture somebody’s side of a situation.”

Nelson agreed with Hernandez, and also emphasized the usefulness of the device for hands-free communication.

“It gives you a greater level of interactivity with the world than just using your cell phone or your recorder,” Nelson told me. “And in the field that can make a big difference to a journalist. It’s a new and innovative way to communicate, which is ultimately what we need to focus on in the School of Mass Communication especially.”

Kargon noted the importance of getting away from cell phones, but he raised a point of concern: hands-free doesn’t create focus.

It was a concern that many of the students I spoke to on campus shared.

My friends constantly tried to guide me as I walked, afraid I would run into objects or people; when others tried them on, their immediate question was if they could get on Facebook.

In a time when governments actually have to ban using social media while driving, it was a scary possibility. I brought this fear up to Hernandez.

“The directions feature is actually really useful, especially for a directionally-challenged individual like me,” Hernandez said.

“I get lost pretty easily, and it’s actually safer for me to pull up a map using Glass than it is for me to fumble with my phone and try to get directions from the screen while I’m driving,” he said. “Plus the screen is so small that it’s almost impossible to lose your field of vision.”

But while I sat and worried about potential ramifications, already there are people making huge steps with Glass.

This includes people like Christopher Kaeding, M.D., a professor and surgeon at Ohio State University, who performed a surgery and broadcasted it live to a Google Hangout using Google Glass in August 2013.

“If people can use it in a certain way, if they can overcome their fear of the technology, if it can develop to an extent where it becomes something new, like the car, like the invention of the motion picture or the cell phone, then it has the potential to be something revolutionary,” Kargon said. “I don’t know if it will happen. It’s not something that I see developing. But there is that chance.”

“This technology is the precursor to the next age in technology,” Hernandez told me.

“I used to think that wearables, like cell phone watches and Bluetooth earpieces, were just a fad, but this is really the start of something new. We joke around about, ‘Oh, I’ll just wait for the chip in the brain,’ but that’s happening now.”

Throughout the course of my own mini-Explorer program, I was constantly asked: “Is this the next big thing? Or is it a flop?”

“Is this Facebook? Or is this Google Plus?” asked a girl on the library steps as she craned her head around, eyes focused on the tiny screen.

There are, of course, problems, but as Nelson reminded me, School of Mass Communication is just beta testing, among the first wave of users finding all the bugs for the developers to patch.

“I don’t know if it’s the next iPhone or the next Segway – something with mass appeal or a niche market,” Hernandez said. “But it’s here, and developing, and I suspect that it’s here to stay in a big way.”

Hernandez was adamant about the permanency of Google Glass. He told me time and again that it wasn’t a niche, it had a future – in communication, in medicine, in storytelling and in our lives in general.

“There are blind people who are learning to ‘see’ shapes and deaf people who are starting to ‘hear’ because of chips using the same kind of technology as Glass that are implanted. Who knows? Maybe one day there will be Google Contacts. It’s a whole new world, and it’s coming now.” 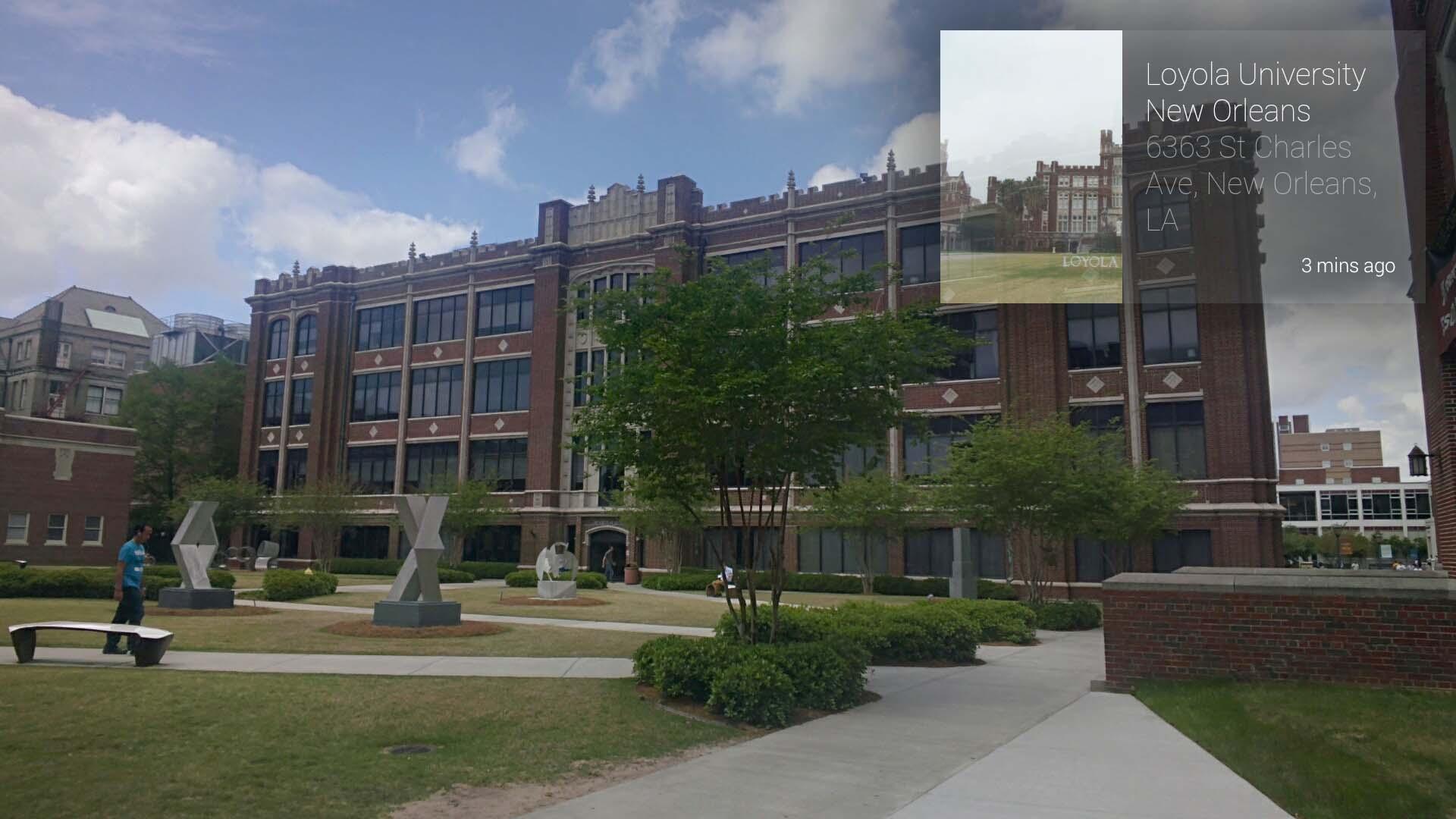 This photo of Bobet Hall was taken by voice command with Google Glass. The display in the top-right corner shows information on Loyola University that Glass pulled from the Internet, completely hands-free. (EMILY ANDRAS/The Maroon)