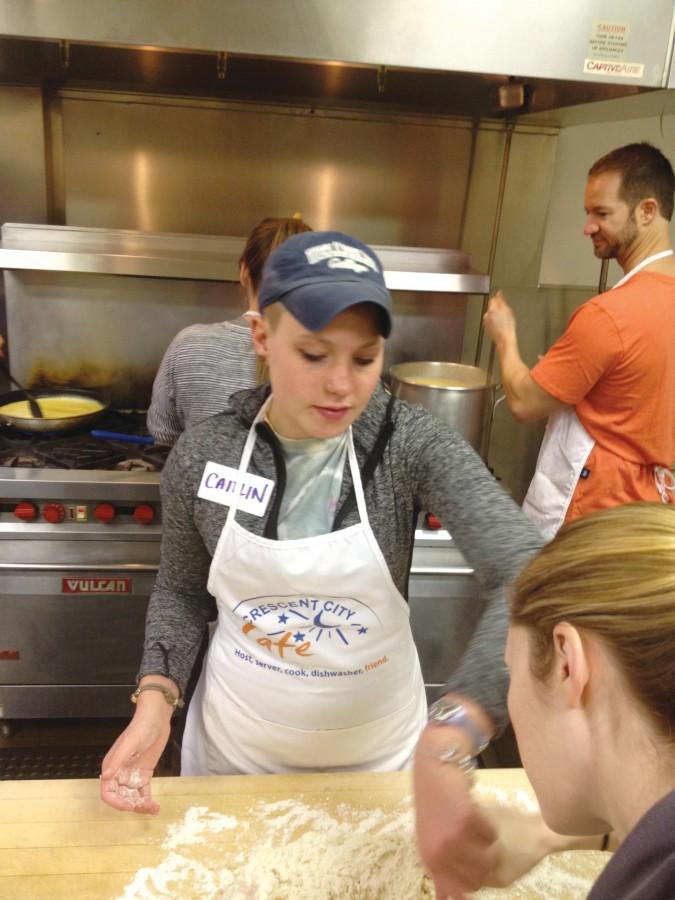 Caitlin Vanderwolf, English writing freshman and first-year group member, helps cook breakfast in the kitchen at Crescent City Cafe. Vanderwolf is one of several individuals in Loyola’s Christian Life Communities who sought to strengthen their relationships with each other and with the greater New Orleans community by volunteering at Crescent City Cafe on Jan. 18.

At 6:45 a.m. on Jan. 18, Katalina Mananghaya got into a van with nine other members of Loyola’s Christian Life Communities and set out to serve meals to the homeless and poverty-stricken at the Crescent City Cafe.

Mananghaya, political science freshman and first-year group member, found the outing to be a bonding experience with not only the cafe guests but also with the other group members, who spent the early morning ride singing along to musicals.

“I think everyone should have the opportunity to drag their feet into a white van that is blasting the soundtrack to ‘Frozen’ at 6:45 on a Saturday morning,” Mananghaya said.

Psychology senior and community facilitator Noelle Lyons explained that service is an integral part of the communities, and that the Crescent City Cafe provided a great opportunity to fulfill that aspect.

“Crescent City Cafe is an awesome volunteer opportunity in which volunteers sign up for certain dining establishment positions: cooks and dishwashers in the kitchen, hosts/hostesses and waiters/waitresses. Volunteers provide a sit-down dining experience for the guests while having the opportunity to interact personally with the guests,” Lyons said.

Lyons described a Loyola Christian Life Community as one of several small groups that meet and use methods taught by St. Ignatius to talk about faith and spirituality.

“It’s a chance to discuss faith and hopefully expand upon one’s own spiritual life, whether you’ve grown up in a church community or are just thinking about incorporating faith into your life for the first time,” Lyons said.

In addition to the sense of community and spirituality the groups provide, Lyons expressed how service also stands as a foundational value within a Christian Life Community.

“Service is an important aspect of CLC because, as Christians, we believe that we are called to serve others. In Ignatian spirituality, service is being with and for others, a chance to connect with those around you who are struggling or who live in absence of dignity, respect and love,” Lyons said.

Lyons said she was glad that members of the groups were able to put their group values into action and that she believes volunteer work at organizations such as the Crescent City Cafe has enriched the CLC experience even more.

“Many times volunteer work has led me to see God in the world and people around me, whether through the people I am working for or working with,” Lyons said.

Adam Suter, the program director at the Crescent City Cafe, has also expressed his delight with the impact that the group members have made on the individuals they serve.

Suter said he knows the impact that these volunteers make by comments made to him by guests, particularly one who called him over and shared how the Crescent City Cafe had inspired changes in his life.

“He was not able to communicate well what exactly these changes were, but as I stepped back, I realized he looked different. He was dressed differently and his face reflected, ‘No really, I’m not the same’,” Suter said.

Mananghaya said she found connections with the homeless in her first service event with the Christian Life Communities.

“In serving the homeless, I was reminded that we all are so much more than our label. A person should not be seen or defined by what they don’t have,” Mananghaya said.

Mananghaya found that her expectations were exceeded by the event.

“Sometimes I feel that I attend CLC to help myself, but this morning, CLC was not about myself. It was about the betterment of our greater community,” Mananghaya said.

Lauren Saizan can be reached at [email protected]