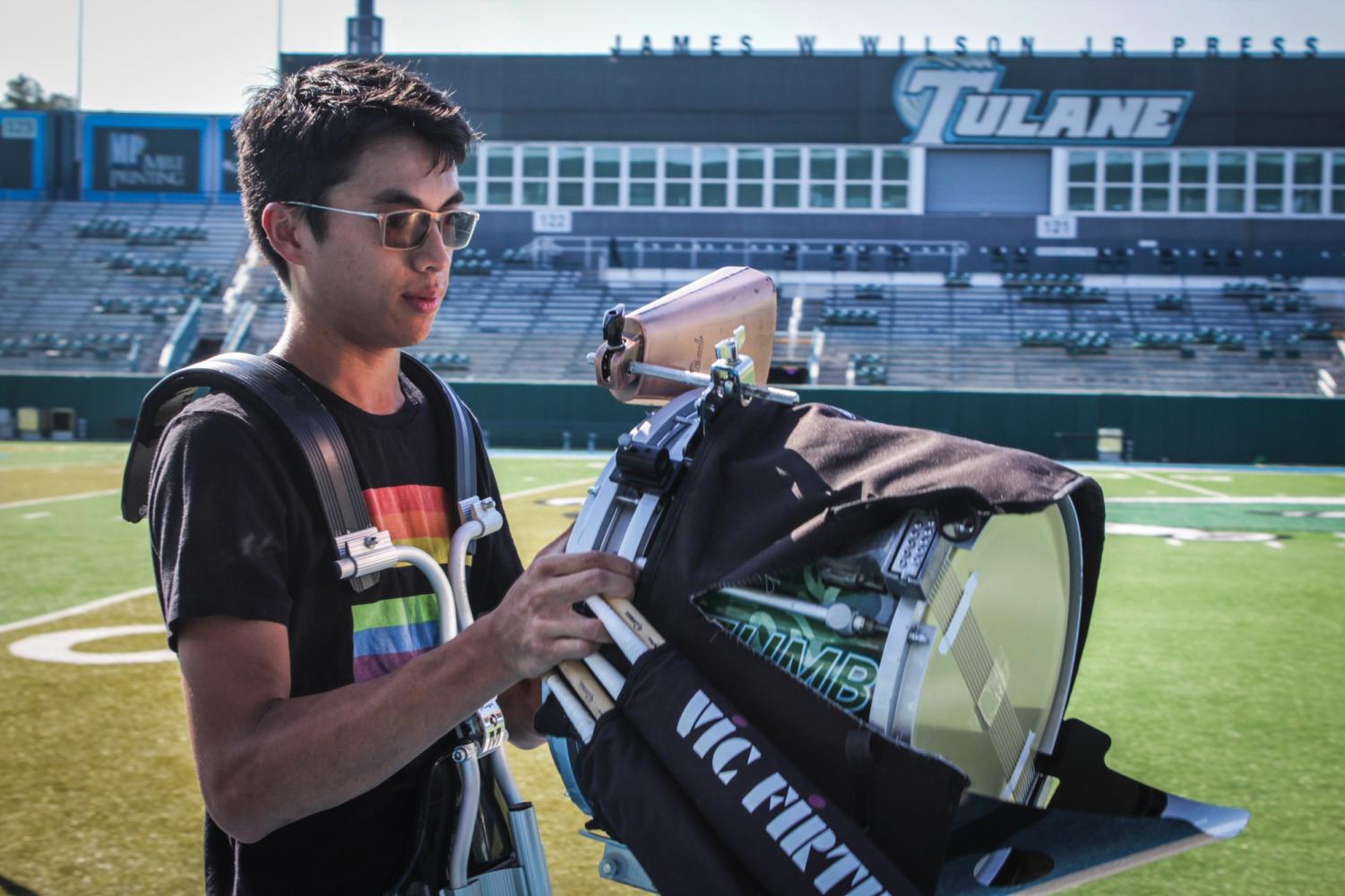 Under the August sun in Tulane’s Yulman Stadium, Demetrio “Dane” Castillo wipes a bead of sweat from his forehead and bounces his drumsticks off a nearby practice pad, waiting for marching band practice to start. Cracking jokes with the other members of the drum line, surrounded by Green Wave billboards and Tulane T-shirts, few would guess that Castillo is not a registered Tulane student. In fact, he goes to Loyola.

Castillo, music composition senior, is one of three Loyola students that make the almost-daily trek across Freret Street to join in on the brass blares, choreographed moves and roaring cheers of Tulane’s marching band.

Barry Spanier, 15-year director of Tulane’s band program, said outside students have been a part of the program since its inception and whether or not to allow Loyola students to participate was never much of a question, considering the history of New Orleans.

“We are the only collegiate marching band in the city,” Spanier said. “Marching bands are so central to the culture of New Orleans, that people want to come here to New Orleans from other states or they have had the experience in high school and want to continue it.”

For Castillo, marching band culture was something he couldn’t quite let go of, even after enrolling at a university that lacked a football team and a band to match. In fact, Castillo’s ties to Friday night lights stretch as far back as he can remember.

“I first saw my brother do marching band when he was in high school (at Jesuit) and I always went to the football games. With my dad, I helped give out the plumes and fill up the water bottles and give water to all the band,” Castillo said.

After his brother’s high school graduation, Castillo was distanced from the field, until he enrolled in Jesuit High School and began playing percussion and low brass in the band he grew up watching from the sidelines.

When it came time for college, Castillo enrolled at Loyola, knowing he could find the subculture of marching band next door at Tulane. Castillo played tuba in the band for two years before taking a year off and returning as a snare drummer for his senior year, a decision that Castillo said has broadened his horizons.

“The band culture is really quirky and fun,” Castillo said of his experience. “I like to be part of another community as well, to meet a whole lot of different types of people and be able to be friends with them too.”

Samuel Orr, forensic science sophomore at Loyola and cymbal player in the band, was also drawn to the band because of his experience in high school.

“I did it my senior year of high school, and it was a more competitive style. Coming over to college, it’s more of a focus on half-time shows, entertaining the crowd and keeping the spirit up,” Orr said. “I have found it is an easy way to make friends and help me stay grounded to home.”

While Orr feels at home within the band, he acknowledged that it can be strange being part of a community at a school he does not attend.

Josie Gottsponer, biology senior at Tulane, has played snare in the band for four years and now serves as the section leader for the drum line. Gottsponer said there is a synergy that comes from Loyola students’ participation in the band and Castillo and Orr’s membership in her section.

“It’s a good time. I think they bring something else to the line,” Gottsponer said. “I think it’s interesting that they don’t go here but they have at least as much school spirit, Dane and Sam especially, … for Tulane football as the rest of us do.”

Spanier echoed Gottsponer’s enthusiasm about the participation of Loyola students in the band.

“It’s been great,” Spanier said. “If they are enrolled and participating, they are an equal band member like everyone else. And yet, they do bring a different perspective. It just adds to the breadth of experience and personalities and perspectives.”

Spanier added that the inclusion of Loyola students in the Green Wave’s marching band has helped shape a culture of collaboration between the two universities and their music programs that goes beyond the football field.

“Beyond the marching band, that’s where the relationships first developed, but in concert band, jazz band, things like that, we share music, host masterclasses with touring artists … we work with Loyola’s music department faculty on other projects as well,” Spanier said. “That’s the nature of our welcome mat for Loyola students to be part of the Tulane band,” Spanier said.

And that “welcome mat” has served as more than just an opportunity, for Castillo, it has helped him to define his future career.

“I want to try to make band music for marching bands from different high schools and try to compose for other ensembles as well throughout the country and maybe the whole world,” Castillo said.

But when asked why he has structured his entire life and his goals around the choreographed pomp and articulate notes of marching band, Castillo simply cracked a smile.

“I like to ask myself that same question as well,” he said.