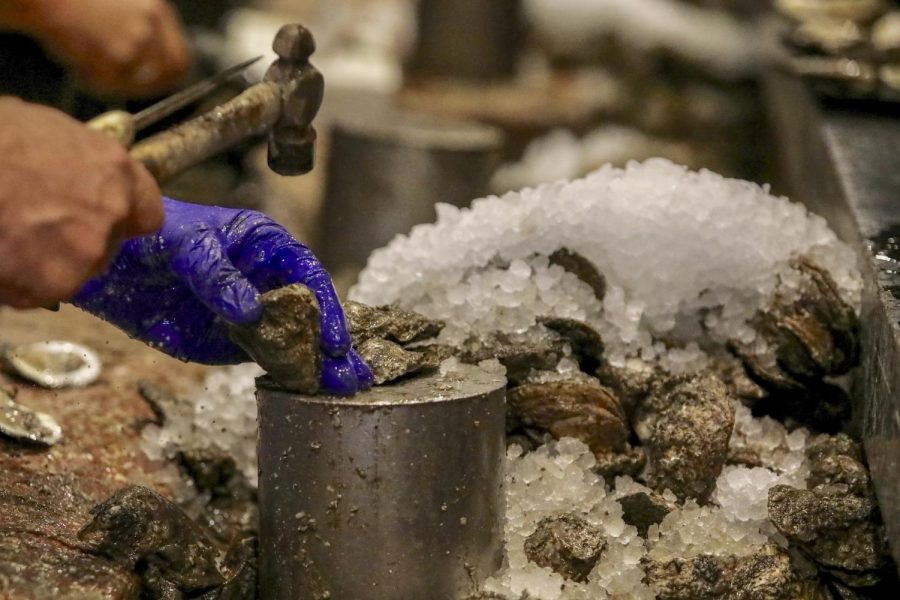 Shuckers crack open oysters at Drago’s Seafood Restaurant in Metairie, Louisiana. The restaurant business is one of the industries impacted by the Bonne Carre Spillway openings this year. Photo credit: Andres Fuentes

It was a quiet September afternoon at the Bucktown Harbor in Metairie.

The water rippled with small blue waves and the wind clapped the nearby flags and banners.

The boats sat on the surface of Lake Pontchartrain, clean, white and empty.

But the docks stood vacant, the fishermen were missing and the waters seemed dead — an all-too-common scene for local seafood communities.

The lack of catches is a result of nearly 163 trillion cubic feet of freshwater from the Mississippi River moving through the lake, into connected waterways and right into the Gulf of Mexico.

The water came from the two Bonne Carre Spillway openings earlier this year. The river carried too much rain water from middle America down to Louisiana and threatened to topple over the levees in New Orleans.

By opening the spillway, that rainwater was able to escape to Lake Pontchartrain and eventually out into the gulf, saving homes and businesses from an amount of water that could fill 1.3 million Mercedez-Benz Superdomes.

But the local environment took a hit at the cost of keeping communities dry.

“The algae were living the high life in terms of their environment,” Phil Bucolo, a visiting biological sciences professor at Loyola, said. “As we open these spillways and divert these waters, we are providing the bottom of the food web in these aquatic environments a source that is typically not as available.”

The freshwater and Louisiana heat created cyanobacterial blooms throughout the southeastern part of the state. The blooms were a hazard to marine life, sucking up oxygen in the bodies of water, and also posing a threat to people that eat fish, crab, oysters and shrimp from local areas.

The Mississippi River water also ruined the salinity in the nearby lakes, bayous and marshes, dumping too much freshwater into areas that usually have a balance of both salty and non-salty water.

“The different levels of salt push (marine life) way down into the basin, so there are a lot of things that can’t live up here near the city,” Robert Thomas, the director for Loyola’s Center for Environmental Communication, said.

The result is scarcer product for businesses across the area, like the weekly farmer’s market just feet away from the Bucktown Harbor.

Instead of the usual lake crab vendor, family shrimpers and a gulf fishermen, the market has been making do with artisan foods, but also a lower number of shoppers than the Crescent City Farmers Market organizers typically expect.

“It definitely hurts. It’s hard,” manager Cristina Berthelot said. “Every five customers ask, ‘Where is Cay? Where’s Ms. Jeanie? What happened to the guy with the crabs?’”

Customers across all seven of the organization’s markets have not been able to get fresh seafood for the past 11 weeks.

With the algae and freshwater issues, vendors do not have the equipment to travel farther for their product, leaving them without income and the market’s customers without their delicacies, especially their coveted brown shrimp and blue crabs.

Louisiana Wildlife and Fisheries reports that the shrimp has seen a 44% decrease in hauls this year and the crabs are worse off, suffering from an 84% dip.

“You expect to get Louisiana seafood,” Berthelot said. “I like eating seafood and unless it’s from the market, I don’t eat it, and I’m sure a lot of people share that sentiment.”

If they can’t find their seafood at markets, the locals are flocking to restaurants, where many owners are deciding between paying more for expensive Louisiana seafood from areas not impacted by the spillway, or importing product from a different region entirely.

Tommy Cvitanovich, owner and manager of Drago’s Seafood Restaurant, said he would rather struggle with bringing in seafood from local waters than give his customers a different product.

His suppliers have to travel farther to fish and trap food for Cvitanovich’s four locations, but Drago’s is famous for its chargrilled oysters, and invertebrates were hit the hardest after the spillway openings.

“We have a bunch of dead oysters now,” he said. “There were some oysters, when you shucked them and opened them, you could see the algae on the oyster.”

The local oysters filtered in water with the toxic algae, making them sick and inedible. The abundance of freshwater also created an environment that they couldn’t live in.

According to reports, the reefs along the Pontchartrain Basin have oyster mortality rates up to 100%, leaving Drago’s without their signature, salty molluscs.

Now, the restaurants rely on the reefs in Barataria Bay, where the product is less savory than Cvitanovich and his customers are used to.

But the oysters weren’t the only thing taken off the menu this year.

Mike Gallo, the founder of Angling Adventures of Louisiana, has had no luck fishing for trout in their usual spots ever since the spillway opened.

Preliminary numbers show that Gallo’s typical fishing areas are bringing in a 50% decrease in hauls this season.

“I don’t know if I caught 150 speckled trout this year, and a lot of times we will catch that many in a day,” Gallo said.

Gallo has been a full-time fishing guide since 1999 in Pirates Harbor, Slidell. Currently he is one of five full-time charter fishermen in an area that usually has 25, and he is counting his blessings.

“I had no trouble getting guides to work for me, which obviously meant they weren’t booked themselves,” he said. “They were always available so I know the spillway had more of an impact on them.”

But some of his neighbors weren’t fortunate enough to remain in the area.

The waters that Gallo relies on are all fed by Lake Pontchartrain, making this year’s fishing issue a common occurrence when the Bonne Carre is opened.

And while the U.S. Army Corps of Engineers has the option of opening the Morganza Spillway to divert the river’s waters, the Bonne Carre has been the consistent choice, opening 12 times since its construction.

The Morganza has only been opened once, back in 1973, and the risk of opening it again may bring dangerous floodwaters and millions in damaged property.

Gallo said, “Unfortunately, I live in the area where the least amount of people are going to be impacted.”

Opening the Bonne Carre Spillway impacts the residents on the eastside of the Mississippi River while the Morganza would impact the westside, a much larger group of land and people.

“I would say, if there were 1,000 guides in Louisiana, 750 of them or more operate from the west of the Mississippi River,” Gallo said.

But there may be hope yet.

The waters that ruined this year’s crop may actually benefit the seafood industry, so long as they can wait three years.

The runoff from mid-America contains large amounts of atrazine, a common chemical found on farms.

“When applied to crops up there, it kills weeds, but we think in very low doses, it may actually act as a nutrient,” Thomas said.

The chemical helps nourish more plant-life at the bottom of the waterways, creating more food for infant animals and more hiding places from predators.

“There is a little lag time and then all of a sudden, there is a huge population increase,” Thomas said. “Commercial fishermen literally have a bonanza. It helps them rebound from the times they are down.”

As for the markets, the restaurants and other businesses, all they can do is wait for the industry to rebound while they struggle to supply the demand.

But fisheries may soon see a temporary relief.

The U.S. Department of Commerce approved Governor John Bel Edwards’ request for disaster assistance due to the damage done by the spillway openings.

For fiscal year 2019, $165 million has been appropriated by Congress through the National Oceanic and Atmospheric Administration for seven states that suffered from fishing disasters this year.

But before the funds are handed out, the administration has to conduct a report on the damages done to the environment and the impact the openings will have on the future. Until that is completed, the state is focused on helping the fisheries and the laborers that depend on them.

Edwards said, “These industries not only support thousands upon thousands of jobs, they help provide some of the best seafood in the world to consumers.”