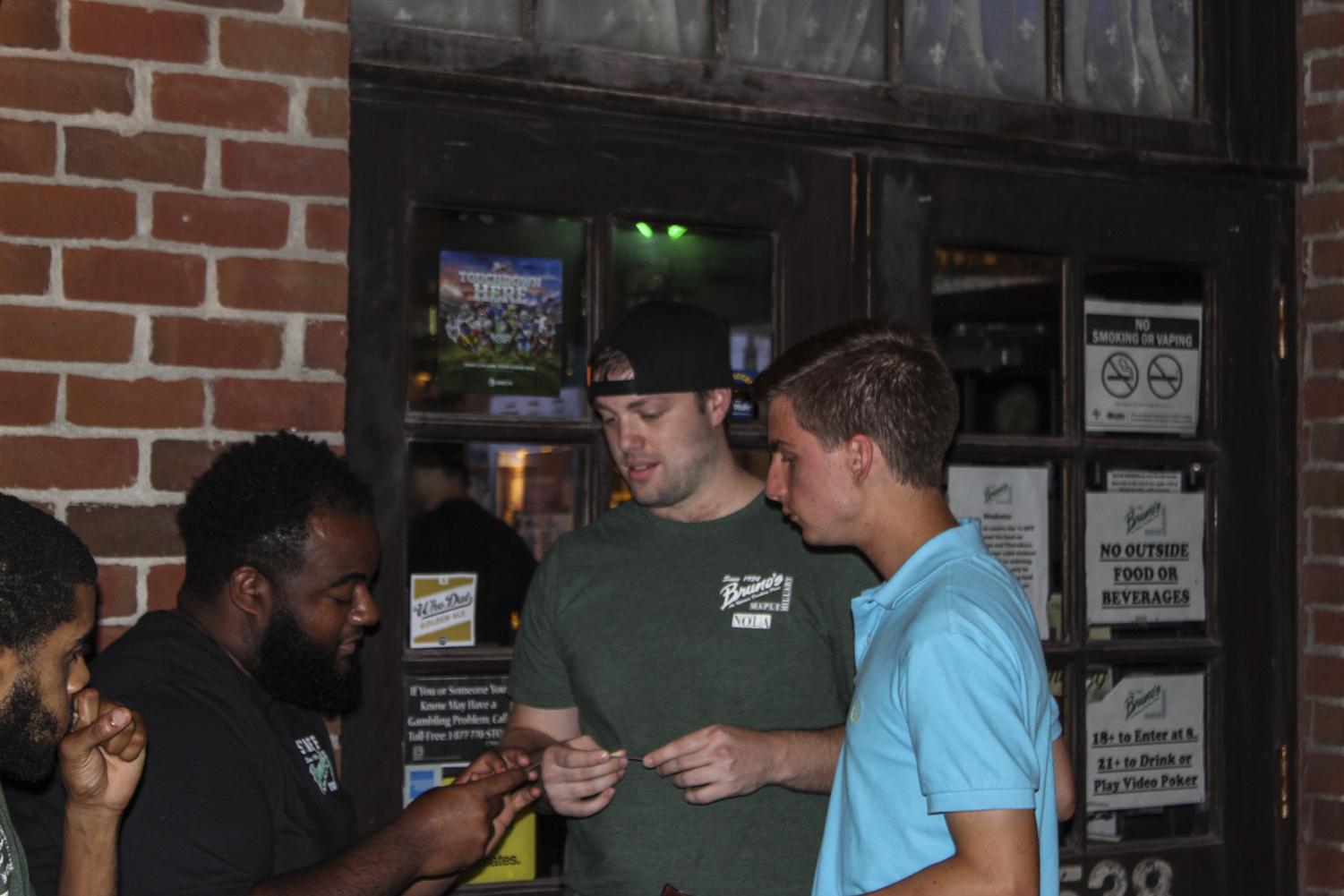 A Bruno’s bartender checks students’ IDs on Wine Wednesday on Oct. 4. Bruno’s trains all bartenders and bouncers to be able to spot fake IDs. (Gabriella Killett)

A Bruno’s bartender checks students’ IDs on Wine Wednesday on Oct. 4. Bruno’s trains all bartenders and bouncers to be able to spot fake IDs.

Faking it: Students use fake IDs to circumvent drinking laws

Ashley Hart had only been in college two weeks when she and a group of friends embarked on an increasingly common college rite of passage. They gathered in front of a blank white wall and took each other’s pictures, careful to follow the standard rules for ID photos: neutral expressions, visible faces and not too much makeup. She then gathered the group’s money — $80 from each person — and headed to the nearest Western Union. Three weeks later Hart received a package filled with chopsticks, a Chinese spoon set and a dozen fake IDs.

“It was kind of what everyone was doing at that point,” Hart, now 21, said.

Hart and her friends ordered their fakes through a popular website called ID God which advertises itself as a novelty ID service based outside the United States. After the payment has been made — Western Union or Bitcoin — the IDs arrive to the U.S. in packages filled with random knick-knacks.

Nobody really knows where the primary sellers are located, although other students described packages filled with stereotypical Chinese items such as fortune cookies and chopsticks. On their website, ID God boasts “premium, scannable fake IDs,” and asks customers to imagine what they could do with their new “novelty ID.”

While it is completely legal to order and own a fake identification card, using one to purchase alcohol is illegal, and penalties include up to a $200 fine and a 90-day license suspension.

Many students were thus hesitant to discuss their fake ID use on the record, but the majority said they purchased the IDs from ID God for two very specific reasons: to buy alcohol and to gain entry to 21-and-up clubs and bars.

Sellers like ID God incentivize students to order in large groups by decreasing the price-per-person. For a Rhode Island ID — a state Hart said was popular due to its low price tag and distance from Louisiana — it costs one person $100 for two IDs. But if four or more people make the order together, the IDs only cost each person $40, according to the ID God website. Some states — Florida, California and Maryland — are advertised as top notch and come with a heftier price tag: $200 for one person.

“By the second semester of freshman year, pretty much everyone I knew had one or was going to get one or even had one, but had it taken away,” Hart said.

Students also described multiple cases where they had attempted to use their fake ID, had been caught and then had the ID taken away from them, either by a bouncer or bartender.

“That’s why they send you two,” Hart said.

But these IDs aren’t the homemade, cut-and-paste jobs of yesteryear. Customers submit their own pictures, names, birthdays and signatures, and the overseas company takes care of the rest, providing addresses, scannable bar codes and an ability to pass black-light tests.

“When we got them in the mail, my friend downloaded a scanner on her phone, and all of them scanned,” Hart said.

The national statistics on fake-ID use among college students are difficult to pinpoint, but one study conducted by the National Center for Biotechnology Information at an unnamed mid-Atlantic public university found that 66% of students sampled admitted to using a fake ID at least once. And while students may see this trend as an accepted norm, the proliferation of these realistic IDs have become a headache for bouncers, bartenders and business owners, too.

Bruno’s Uptown Tavern, a popular college bar within walking distance of both Loyola and Tulane’s campus, draws a vibrant student crowd during the school year. The bar is 18-and-up to enter, but 21-and-up to drink, which means the bartenders and bouncers are all trained to spot fakes according to David Melius, owner of the tavern.

“I would say most of the time, we can pick them out,” Melius said. “I don’t think anyone can be naive enough to think that someone doesn’t, every once in a while slip past the system, here or anywhere else, but we make a sincere effort all the time to have everyone of age consuming alcohol,” Melius said.

Melius, who has spent 45 years in the industry, said the problem of fake IDs certainly is not a new one — but the quality of the IDs have significantly changed, creating new challenges.

“Nowadays technology has gotten so good that you can order things online. I think in the old days, kids used to make them themselves with glue and tape, but those days are gone,” Melius said.

Melius admitted that students — even students under 21 — are a valuable demographic when it comes to late-night food options and socialization with friends. But the law always comes first.

“We’re responsible for serving someone under 21,” he said. “Our (liquor) license is a very valuable tool for us to lose and certainly we covet that and will do everything to protect it.”

Bruno’s will sometimes use a scanner to try and distinguish fakes from real IDs, but the majority of the checking falls on the doormen and bartenders.

“Some you can tell just by the shading of the face on the ID, some of them have lettering across the ID, which no state does. But usually you can spot it the best by the lack of depth in the picture itself,” Will Wilson, Bruno’s general manager said.

Although many states have taken critical steps in trying to combat the problem of fake IDs, bars in college-populated areas can’t always keep up, according to Wilson.

“It certainly works within those states, but when you deal with a college bar that serves a lot of out-of-state students like we do, that constant change becomes a road block for us,” Wilson said. “Sometimes we turn away people with fake IDs and it turns out they’re real IDs and we hate that.”

On Wednesday nights when Loyola and Tulane students gather at Bruno’s for the popular “Wine Wednesday” deals, Wilson said he will sometimes see more than 15 fakes a night.

“Nobody needs to rush to be 21. It will catch up to you and you’ll have plenty of time to drink,” he said.

Wilson recounted a time an Alcohol and Tobacco Control agent came to the bar and was unable to tell the difference between real IDs and fake IDs that had been left at the bar.

“If the residing body, the governing body, can’t tell then how are we supposed to?” Wilson said. “But we still try.”

The true regulating body of identifications, the Transportation Security Administration, was unable to discuss the topic in depth.

“We do have equipment that assists our officers in detecting fake IDs, but most of the information concerning our program is considered sensitive security information and cannot be shared with the public,” a TSA representative said in an email.

For campus police, the issue of fake IDs is not one they typically deal with directly, according to Loyola University Police Department Captain Roger Pinac.

“Our primary contact is through lost and found,” he said. “For me it’s kind of a standing joke because I will find a wallet or purse and it will have five IDs in one purse.”

After a verification process that includes checking found IDs with the student’s certified university ID, Pinac will keep the fake IDs — something that usually elicits a host of stories from the caught students.

“The most common is that’s my friend’s, and I was just holding it,” he said. “I say ‘have your friend come get it then.’”

But there is no punitive action taken through the university and Pinac said the department isn’t interested in running the student offenders through any disciplinary action as these cases are difficult to prove.

“Just the fact that you lose the ID is kind of justice in itself,” Pinac said.

The start of the school year, however, is the most popular time for the Alcohol Beverage Control to conduct rounds at the university bars, according to Pinac, who warned students about the potential legal dangers of getting caught with a fake, including fines, community service and license suspension.

“It sounds like a rite of passage, it’s kind of fun, but it just creates a whole lot of different problems,” Pinac said.

But for Hart, getting her fake ID was just part of the family ritual.

“I actually did tell my parents that I had a fake ID. They thought it was funny,” she said. “My dad told me he had a fake ID when he lived in New Orleans and that was when the drinking age was 18, so I don’t know what he was doing. But they were cool with it.”