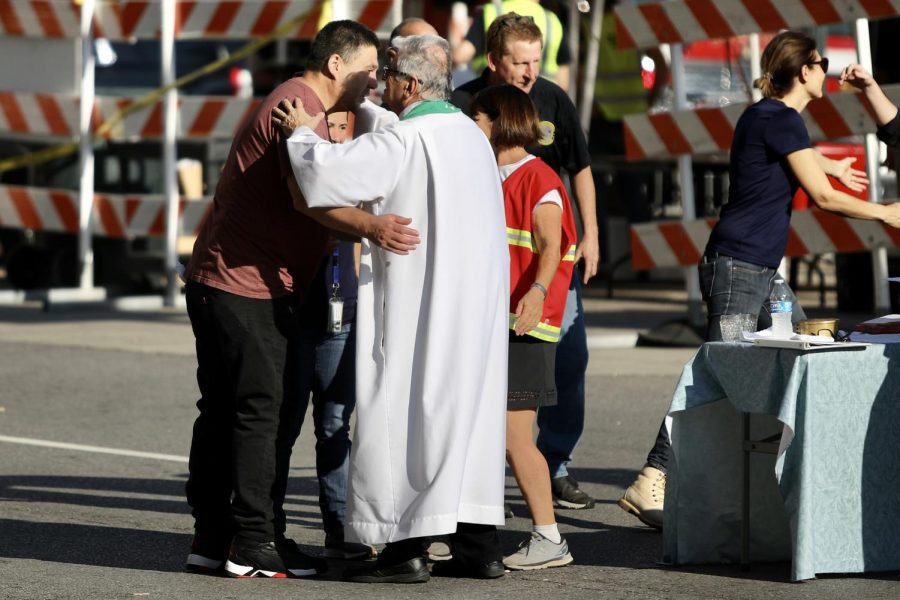 Sergio Ponce and the Rev. Anthony Rigoli come together for a hug following a mass just blocks away from the collapsed Hard Rock Hotel on Oct. 20, 2019. Ponce is the brother of one of the three construction workers that were killed in the collapse. Photo credit: Andres Fuentes

With a collapsed building, two unstable cranes and hundreds of nervous rescue and medical crews, the only natural thing to do was break bread and hold hands in the middle of New Orleans’ business district.

In front of the collapsed Hard Rock Hotel, near the corner of Canal and Saratoga Streets, Catholic leaders decided to ease the nerves of the first responders before they imploded two cranes dangling 300 feet above them.

The Rev. Anthony Rigoli was in charge of the ceremony. He invited workers who wanted to hear the Gospel as well as Sergio Ponce, who is the brother of Jose Ponce Arreola, one of the three people who died in the building collapse on Oct. 12.

Rigoli felt that the Gospel for the Canal Street mass was perfect for the occasion.

“The Gospel was really touching,” he said. “The Lord said, ‘Be persistent in your prayer.’ The thing was, be persistent and be faithful and the only thing you’re going to guarantee is to get strength.”

Ponce and other family members of the victims have been on the site waiting for any updates on their loved ones. Rescue teams have been searching the building, but with caution.

The structure remains unstable and the families still want closure. Rigoli hoped he could offer that to Ponce with the ceremony, words of kindness and an embrace.

“He was just crying. I felt so sad for him. Sometimes I used to worry about what to say, but then I realized, words don’t mean anything. It’s just being there (for people),” Rigoli said.

The emotional mass was just one instance of Catholics helping during the Hard Rock crisis and they are eager to offer more support.

Martin Gutierrez serves as the Chief Operating Officer of Catholic Charities in New Orleans and was helping Rigoli as a deacon on the day of the implosions.

“To be able to bring that type of ministry to where the people are hurting at the site is an amazing opportunity. I had to hold back the tears when we were at mass,” Gutierrez said.

Worship services aren’t the only thing that Catholic Charities has been helping with. Since the day of the collapse, the organization has done what they could to help house, feed, and counsel the victims’ families, the first responders, and the residents and businesses that had to evacuate the area.

And the CEO and President of Catholic Charities, Sister Marjorie Hebert, is ready to do more work.

“I think we do a lot. There’s always more to be done and we are ready to respond,” she said.

Right now, the organization is offering counseling to those that need it, whether it be with a religious leader, a guidance counselor or a social worker.

Organizers want those impacted by the collapse to know that you don’t have to be a practicing Catholic to receive their help.

“You don’t have to be Catholic but because we are Catholic, we are going to reach out and help you,” Hebert said. 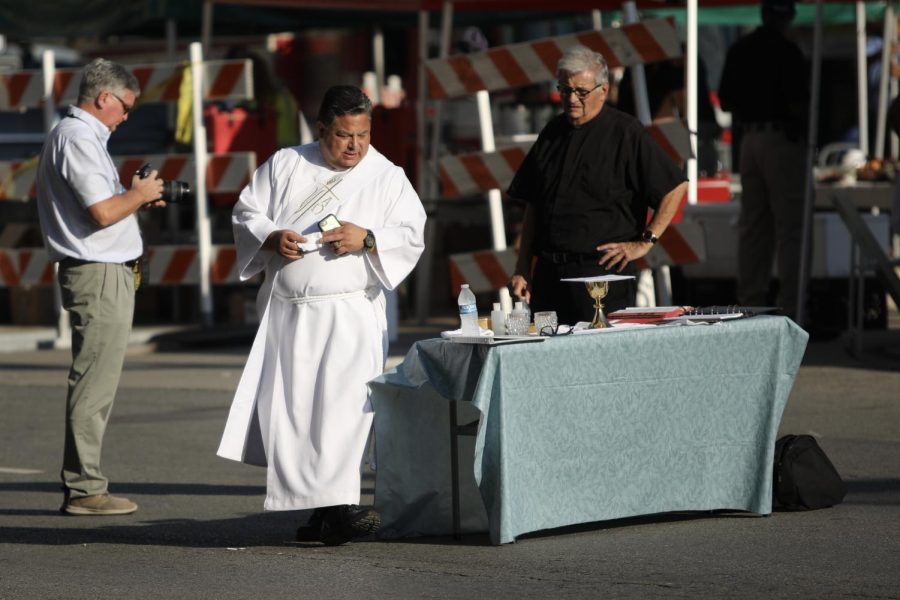