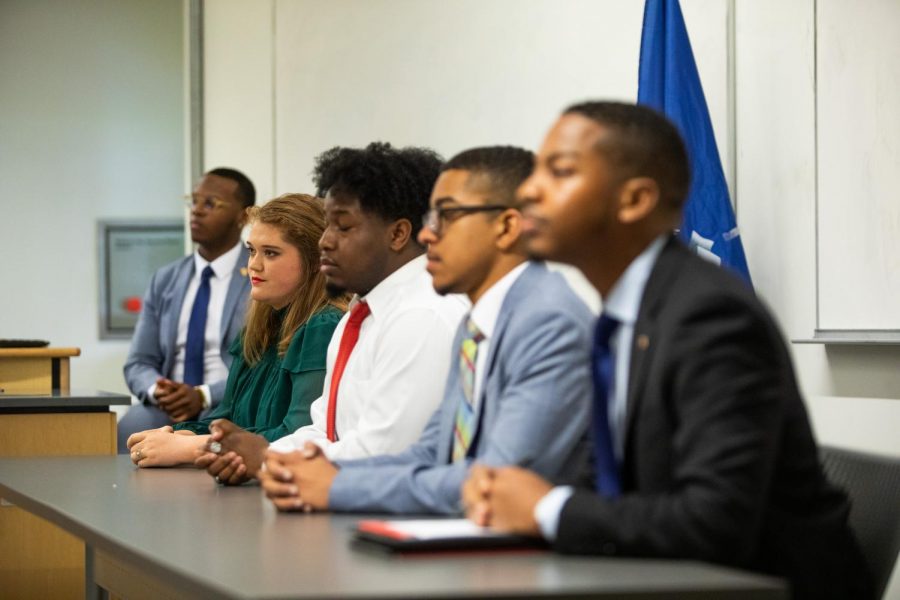 Who are the candidates? A look at who is running for SGA president and VP

Only one year after an uncontested SGA election, four executive tickets are now running for student government’s top spots and students have until Wednesday, March 11 to elect their new student leaders.

Both volunteers at the Women’s Resource Center and Social Justice Scholars who have spent one year on SGA’s court of review, Sanchez and Bashi, if elected, plan to focus on “authenticity” in the form of reevaluating how SGA operates, engaging with the New Orleans Community and applying the ideals of equity and inclusion to how organizations and campus resources are supported by SGA.

“We are really trying to advocate for actual change here on Loyola’s campus. If you look at some of the other tickets, they are really focusing on more, how would you say, cosmetic changes almost,” Sanchez said.

While they applauded the current administration for bringing back excitement about SGA, the pair said there is still work to be done in making the government system transparent to students.

Sanchez said part of this “actual change” will come in the form of publicizing SGA meetings, enforcing SGA rules and holding senators accountable when they do not report on the actions of the student organizations they oversee, as well as creating a tiered allocations system that will organize requests for SGA funding based on cost.

Sanchez said this new system will force SGA to ask questions about the impact and worth of the cost of events and, hopefully, empower all Loyola organizations to compete for SGA funds.

The pair also wants to bridge what they see as a divide between Loyola and the City of New Orleans by partnering with local businesses for University Programming Board and SGA events, as well as connecting students of all majors and colleges with local businesses and professionals in the fields they want to one day work in.

While they feel passionate about their platform, Sanchez and Bashi both said their mission is to focus on the voices and needs of Loyola, no matter what tone or message those voices are conveying.

“There’s no improvement if you are not looking at your flaws,” Bashi said.

The pair’s platform is defined by plans to advocate for a voting student member on the board of trustees, hopes to improve alumni relationships with students, and the promotion of equity and justice throughout campus through the creation of a paid director of equity as well as individualized policies.

While the SGA president is able to sit in on meetings with the board of trustees, they do not have voting power in the way board members do. Richardson and City said that having not only a student voice, but a student voice with power is critical when it comes to closed-door decisions that will affect Loyola and its student body.

“The SGA president is not a member of the board of trustees, they are invited,” Richardson said. “That is incredibly problematic especially because (the board) is managing the future of people’s degrees.”

This is why Richardson and City want to advocate for a student member who will sit on the board for two years. The ticket also wants to require board members to attend a Loyola student event every quarter to bridge what they see as a gap between trustees and the community.

“It’s very easy to be in an office and see the statistics, the money, all of that and to not see the culture and beauty of the university you are serving,” City said.

If elected, Richardson and City said they also want to modernize the alumni directory and find ways for students to network with alumni as well as add a youth advisor position to the board of alumni relations.

The pair also stressed their desire to advocate for “equity and justice,” both in how SGA operates and how it advocates for causes on campus.

Richardson said policies as large as Loyola’s current lack of an official diversity and inclusion officer to the granular allocations of SGA, who refused to allocate money for Skittles and Arizona tea at the Trayvon Martin vigil earlier this year, can make students of color feel isolated.

“It leaves black and brown students, not exclusively but particularly, feeling like they got the short end of the stick,” Richardson said.

To promote equity within SGA, the pair plans to pay special attention to what organizations receive allocations and why, have members undergo implicit bias training and wants their administration to hold weekly meetings with The Women’s Resource Center. They have also pledged that SGA will give $5,000 to Iggy’s Cupboard every semester.

“We have seen a lot of Loyola. We were thinking of things that every student can say ‘that affects me,’” City said. “But there is a privilege in being a student leader. Let’s be real, there is a privilege. The issues that you face tend not to be what the everyday Loyola student is going through. So we want to make sure we are hitting these high goals… that can really affect our school 10 years from now.”

“As an overall trend I see is a lot of people consider Loyola maybe their second choice or their backup school,” McCrory said. “So, I’ve become really passionate about changing that perspective.”

Both have previously served as senators for the College of Arts and Science — McCrory for two years and Owens for one — and both served on the bylaw reform committee. They said they want to continue serving by improving communication between student government and the student body.

“My top priority is organization, visibility and transparency,” McCrory said.”

In addition to visibility and transparency, the duo’s campaign focuses on beautification and utilization of campus space, elevating the student experience, and alleviating food insecurity.

The two said they would increase the number of town halls held to keep students informed, and McCrory said she would deliver at least four state of the student government addresses, keeping students updated on the inner workings of SGA.

Owens said in addition to keeping students informed, he and McCrory would also focus on listening to student voices.

“Making sure we listen to students’ needs,” Owens said, “that’s the number one job we need to do beyond anything else, beyond spending, is just simply listening to and voicing those concerns to the administration.”

He said they would aim to work more closely with organizations and clubs so that students know the SGA resources available to them.

McCrory said the ticket’s beautification platform would emphasize cleanliness across campus, as well as focus on better utilizing student spaces like the Danna Center basement and the new community kitchen.

The pair said their food insecurity platform was inspired by students’ frustration with current dining options and hours, and a lack of awareness about Iggy’s Cupboard. They said they want to promote an open dialogue with Sodexo so students can be part of the dining conversation.

They also said they have already negotiated a partnership with Holy Name of Jesus Parish to receive weekly donations to Iggy’s Cupboard.

Similarly to their fellow candidates, the duo said they want to revamp the allocations process, creating a “strict procedure,” and “primary qualifications” student organizations must meet to receive allocations.

As for their competition, the pair was critical of the current SGA administration’s spending on revamping the student government space, The Hub.

“We don’t think that helps the student experience at all,” Owens said.

They also criticized Richardson and City’s plan to add a cabinet position for a student voting member on the Board.

“It simply shows to me that they aren’t able to represent us themselves, they have to pay somebody else to represent us, to represent the students for them,” Owens said. “I don’t believe that’s necessary, so any positions we add would be intentional and necessary.”

McCrory and Owens said they believe they are the most passionate ticket running, fueled by a love for Loyola and a desire to make it better.

“Our overall platform has been a Loyola to be proud of,” McCrory said. “I want everyone to be so proud they go to school here and represent Loyola with the utmost passion and love for their school.”

Brandon Vincent, commissioner of elections, announced that only three tickets were left in the running.

Voting begins Thursday, March 5 at noon and lasts until Wednesday, March 11 at noon. Students can vote on HowlConnect.

The results will be announced Friday, March 20, at Crawfish in the Quad.