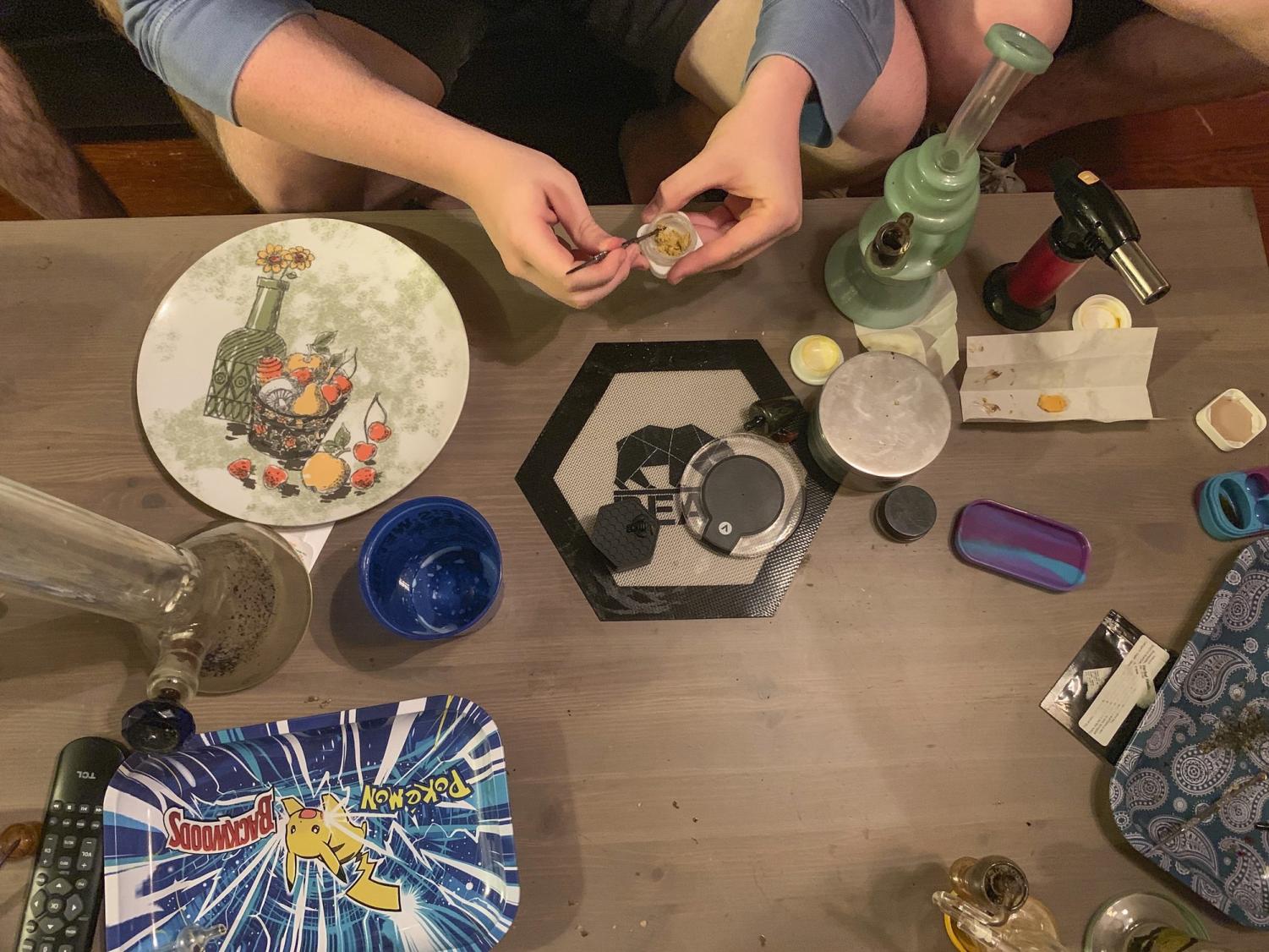 A college student uses a metal nail to break off a piece of wax concentrate before inhaling its vapor to get high Sept. 10. Earwax-like marijuana concentrates have been known to elicit extreme highs and, sometimes, psychotic behavior, according to Special Agent Randy Ladd of the Denver Division of the DEA. (Rose Wagner)

A college student uses a metal nail to break off a piece of wax concentrate before inhaling its vapor to get high Sept. 10. Earwax-like marijuana concentrates have been known to elicit extreme highs and, sometimes, psychotic behavior, according to Special Agent Randy Ladd of the Denver Division of the DEA.

College students turn to wax marijuana concentrates to get high

Felix, a college junior, sits on the edge of a black leather couch in his friend’s house, surrounded by a collection of recycled furniture, vintage plates and discarded knicknacks. An abandoned lightsaber sits on the couch next to him. Its origin and purpose are unknown. It’s after dark on a weeknight during the awkward time of year between the banality of summer and the workload of midterms. He says he just wants to shake off the stress of the day.

His friend places a small dot of a sticky earwax-like substance on the edge of what looks like a long metal nail and uses a handheld blowtorch to heat a chamber on the side of a nearby glass rig. Watching as it emits a warm orange glow, Felix cracks a smile of excitement.

Lowering his lips to the top of the water-filled glass rig, he begins to inhale the vapor as his friend twirls the wax-laden nail around the chamber.

For Felix, it’s a ritual that has become a near daily routine :

His eyes begin to glaze over. Looking up at the ceiling and back to his friend, he sinks down into the couch, taking a moment to relish in the high.

Felix, whose name has been changed for anonymity, began smoking marijuana during his sophomore year of high school. A misfit in a small rural town, he was eager for acceptance. All it took was one night and a trip to a local cemetery in a classmate’s Prius for him to find a friend group and the substance that would, later, become a daily part of his life.

But it wasn’t until his second year of college that Felix was introduced to wax dabs, sticky marijuana oil concentrates that can consist of up to 99% THC, over three times the average THC level in Colorado leaf marijuana, according to the Special Agent Randy Ladd of the Denver Division of the DEA.

Dabs can come in the form of sticky or crumbly wax or other oils and are the result of extracting THC from marijuana using solvents such as butane, leading to what can be an overwhelming and powerful high, according to Ladd. 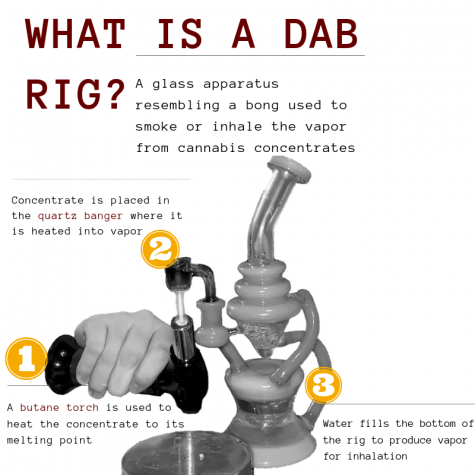 For Felix, whether or not to try dabs was not much of a question, and the extreme high that he felt the first time he took a hit left him hooked.

“You know, we are all at that age where we are experimenting especially with our bodies, and socially and in everything, so I was curious to experiment with another drug,” Felix said. “It is so strong that it flows through your whole body and your whole body becomes relaxed and heavy. I consistently buy dabs, I don’t even buy bud anymore.”

Felix said his decision to ditch leaf marijuana for concentrated wax dabs was not only about maintaining a powerful high, but saving money. One gram of wax at around $30 typically lasts Felix two to three weeks, while his prior habit of bud had him paying at least $45 for a quarter ounce every three to four days.

However, marijuana concentrates have altered Felix’s relationship with weed. What once was a social drug for him, is now a daily part of his life, a way to self-medicate and manage his bipolar and anxiety disorders.

“It’s right there when I wake up in the morning. I like to take it when I wake up and go to class so I can be relaxed,” Felix said. “The role of it in my life has increased because I use it as a coping mechanism.”

But some college students have had more tumultuous, and even traumatizing, experiences with the powerful concentrates.

Blake, a college junior whose name was changed for anonymity, was at a friend’s house last summer when he saw marijuana wax for the first time. Not a regular user of weed, Blake said he was caught off guard by the technical process of hitting dabs. But despite the unique process, Blake was willing to try it, a decision he said he later regretted.

“I had a chest cold and I remember not being able to breathe for what felt like hours. The paranoia set in within moments. I couldn’t sit down because I was spinning, so I had to stay in motion to combat the feeling of puking. After hours of dry heaving, crying and nausea, I was able to sit still,” Blake said. “To say the least, I did not enjoy it and was afraid to try it again.”

Ladd said experiences like Blake’s are not uncommon, even in Colorado, and are a far too often side effect of using dabs and marijuana concentrates. Catatonic states and marijuana psychosis, consisting of hallucinations and violent outbursts are just some of the dangers of high doses of THC that the state has been confronting since legalization back in 2014, according to Ladd.

“I spoke to an emergency room doctor down in Pueblo, Colorado and she says there is not one shift that goes by where someone does not come in suffering from marijuana psychosis, marijuana catatonia or, there’s another term she coined, it’s called ‘scromiting.’ So when you overdose on marijuana, she said that it is violently vomiting and screaming at the same time,” Ladd said. “It is not an anomaly. It is not uncommon.”

But even those with psychotic or paranoid experiences with the potent drug have gone back for more, including Blake.

“With much hesitation, I tried dabs again. It was great,” Blake said. “I think the amount of wax I tried was the perfect amount. I did not feel any discomfort like I did the first time. It was the giggly, loopy and stereotypical ‘high’ feelings that one looks forward to when they are thinking about getting high.”

But Special Agent Debbie Webber of the New Orleans DEA said there is more to worry about than just one’s initial reaction to dabs and marijuana concentrates. The larger concern, is whether the drug is even pure THC in the first place.

“The big issue we are seeing these days is fentanyl. Now, we are seeing fentanyl mixed in with methamphetamine, and cocaine and even marijuana,” Webber said.

While the DEA recently seized fentanyl-laced dab pen cartridges in Gulfport, Mississippi, Webber said laced marijuana wax has been reported in other areas of the country, but not in Louisiana.

“That is not to say that even though we haven’t heard about it here today, that it won’t be here next week,” Webber said.

Felix and his friends, said they are mindful of Webber’s concerns, refusing to buy dab pen cartridges from dealers and importing their wax directly from connections in Colorado.

But Ladd emphasized that even products from states that have legalized marijuana are likely to be decieving.

“The vast majority of the marijuana produced in Colorado is sold on the black market and none of that is regulated,” Ladd said. “So if people are thinking ‘Oh, it’s coming from Colorado therefore it must be safe or it must be OK because it’s legal in Colorado,’ they are probably fooling themselves.”